Driving into Lod, it's easy to forget that this ancient city that once sat at the intersection of the Cairo-Damascus and Jaffa-Jerusalem roads is located right in the middle of Israel.

Some of the neighbourhoods, with their garbage-strewn dirt roads and slap-dash housing, look more like Gaza than the modern, well-kept Israeli communities just a few kilometres down Route 40 beside Ben Gurion International airport.

As well, the crime rate and high number of murders every year make Lod the most violent city in the country.

As Israelis prepare to vote in their Jan. 22 election, these are among the kind of issues that matter most to the electorate.

The problems that plague many of Israel's mixed Jewish-Arab communities – cities such as nearby Ramleh, Jaffa and Akko – are felt most acutely in Lod, where Jews account for about 75 per cent of the population and Arabs the rest.

"On many nights we hear the shooting," says Hassan Abed al-Ma'ati, 20, a student at the University of Jordan in Amman, who is home for the holidays. He refers to the violence, frequently over drug deals and often between clans, found in the all-Arab neighbourhood of Pardes Sneer at the eastern edge of Lod.

"The police don't even bother to come, if it's an Arab shooting an Arab," he said with disgust. "But if the victim is a Jew, the police will have the shooter arrested within three or four hours."

The Jewish-dominated municipal government is a mess, with several past officials having been charged with corruption. Lod's eighth mayor in 15 years, an 80-year-old retired official brought in two years ago to chair an appointed city council, is the first city leader in more than a decade to make any improvements.

Part of his program has been to build more Jewish neighbourhoods, even in Arab areas, a plan with which Jamil Ohini, 41, agrees. "We Arabs have been unable to get together and we're letting our children down," said the tire serviceman, who can neither read nor write.

Mr. Ohini, who also lives in Pardes Sneer, added that while most Arabs have decided not to vote in next week's national election, he would be voting for Shas, a Jewish Haredi, or ultra-Orthodox, party that is most popular with Jews who came to Israel from Muslim countries and endured discrimination from European Jews.

"They're the only ones who can help the Arabs," Mr. Ohini said. "Their interests are the same as ours."

Hardships are not confined to Lod's Arabs. In the centre of town, just outside the renovated municipal offices, groups of idle Ethiopian and Russian immigrants hog the few public benches and tables. A fist-fight breaks out among Russian-speaking men playing backgammon and all the groups refuse to be interviewed or photographed.

Aryeh Dayan is something of a comic figure as he makes his way across the city square delivering a bouquet of roses and a dozen helium-filled balloons for someone's birthday. Mr. Dayan has owned a florist shop in Lod for more than 20 years, but lives outside town and has told his children to stay away from the city.

"Look around," he says. "There's not enough work and too much trouble."

Lod has been a dumping ground for many unwanted people. Palestinian collaborators were moved here from Gaza and the West Bank; they found safety but no welcoming from either the Arab or Jewish communities. The same was the case for Bedouin displaced from homes in the Negev. Ethiopian immigrants have been the latest group to settle here. They're not particularly welcome either.

"There's too much prejudice," says David Pilcha, 21, recently returned from military service and hoping to follow in his mother's footsteps as a doctor. "We need to talk to each other."

Mr. Pilcha says he has heard the gunshots at night, as has 20-year-old Mr. Abed al-Ma'ati in the Arab neighbourhood of Pardes Sneer. "We just assume the police are on their way to the scene. Then we go on with our lives."

The difference is that Mr. Pilcha, who moved with his parents from Uzbekistan 20 years ago, lives in perhaps the nicest neighbourhood in Lod: Neveh Nof, which means Scenic Habitation.

While the mostly dirt roads of Pardes Sneer have no names, the tidy streets here are named for flowers. The 200 or so neat cottages that line the streets teem with flowers. And guard dogs.

Somewhat surprisingly, Neveh Nof, at the eastern edge of the city, is also a mixed neighbourhood. Eugr'me Moniyair, 65, a Christian Arab, says she and her husband moved into the area five years ago. "We used to live near the bus station, but couldn't stand the crime and the drugs," she said.

A few other well-off Arab families also live in the area, she said.

"The solution can't come from the government," Mr. Pilcha says with youthful idealism. "We need to fix the community from within."

Wanted: Diamond polishers in Israel. Piety not a problem
January 2, 2013 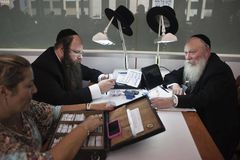