A third terrorist attack in less than three months has left Britain badly shaken and raised new questions about the country's ability to thwart deadly plots inspired by Islamist extremists.

A total of 34 people have died and more than 200 have been injured in a string of jihadi strikes over the past 73 days that have targeted just about every facet of life, from the Houses of Parliament to a pop concert in Manchester and to one of London's most-popular nightlife districts.

The latest attack came on a balmy Saturday night in London's Borough Market neighbourhood near London Bridge, an area full of popular shops, pubs and restaurants. Shortly after 10 p.m., three men drove a small van into a crowd of pedestrians, crashed the vehicle and then stabbed people randomly. Witnesses recalled moments of horror as the men calmly lashed out indiscriminately, sometimes reportedly shouting "this is for Allah" as they plunged their long knives into people.

London terror attack: What we know so far

The attackers were wearing what appeared to be explosive vests that were later discovered to have been fake. The BBC showed a photograph of two men shot dead by police, one of whom had canisters strapped to his body.

"It was carnage, it was mayhem. It was indescribable," recalled Lewis Bennett who was in a pub when one of the men burst in and began stabbing a woman's leg. "There were many victims. I remember coming from the loo and hearing the screaming and realizing the mayhem."

Police arrived within eight minutes, gunning down the men in a hail of 50 bullets. The attack left seven people dead, including Canadian Chrissy Archibald from British Columbia, and injured 48 others. By Sunday, police had yet to name the assailants, but officers had arrested 12 people and conducted raids in two locations.

"We grieve the loss of our beautiful, loving daughter and sister," Ms. Archibald's family, from Castlegar, said in a statement, adding that she had moved to Europe to be with her fiancé.

Ms. Archibald "had room in her heart for everyone and believed strongly that every person was to be valued and respected," the family said, noting she worked at a homeless shelter prior to moving overseas. "She would have had no understanding of the callous cruelty that caused her death."

The family asked that people honour her memory by helping to improve their communities.

"Volunteer your time and labor or donate to a homeless shelter," the statement said. "Tell them Chrissy sent you."

Cassie Ferguson Rowe, the sister of Ms. Archibald's fiancé, Tyler Ferguson, posted this on Sunday on Facebook: "I can't breath. You hear these things so often but it doesn't seem real. Last night in London, my baby brother lost the love of his life on the London bridge. In a split second his entire life was ripped away from him. Hearing his painful sobs on the phone while he's alone trying to deal with this tears me apart. I have no words. If you know Tyler, please be there for him now, and later when what happened sinks in, he's going to need us all."

Also on Facebook Sunday, Tyler Ferguson's brother, Mark, expressed his shock: "My brother and his fiancé were on London bridge last night. She was one of the victims struck by the van. They tried everything but weren't able to save her. His life, and all those close to her have been changed forever. … Life will never be the same for Chrissy's family or my brother. What a senseless act. Things need to change."

Prime Minister Justin Trudeau responded to the latest terrorist strike in a statement Sunday morning: "Canada strongly condemns the senseless attack that took place last night in London, United Kingdom, which killed and injured many innocent people. I am heartbroken that a Canadian is among those killed. We grieve with the families and friends of those who have lost loved ones, and wish all those injured a speedy and full recovery."

In Britain, the terrorist strike has plunged the country into a divisive debate about security and whether the intelligence service has done enough to track extremists. So far, no one has been charged in any of the three attacks and police have yet to determine the scope of the networks that might have been involved. The latest killings also came in the final stages of campaigning for the general election on Thursday.

Prime Minister Theresa May and her Conservatives had enjoyed a massive 24-point lead in the polls heading into the campaign, but that has been reduced to less than five points and some polls predict the Tories could lose to the Labour Party. On Sunday, Ms. May and the other politicians suspended campaigning for the second time because of terrorism, but security issues have now become a dominant theme in the election.

Ms. May moved quickly to shore up her standing on the issue, giving a statement from the steps of 10 Downing Street on Sunday that condemned the killings and promised a new crackdown on terrorists. Saying that "enough is enough," Ms. May vowed to increase powers for police, lengthen sentences for terrorism convictions and create new criminal offences to catch more extremists. "We cannot and must not pretend that things can continue as they are," she said.

She also took aim at social-media companies such as Facebook, Google and Twitter, saying they haven't done enough to stop the spread of hate and terror online. "We cannot allow this ideology the safe space it needs to breed," she said. "Yet that is precisely what the Internet, and the big companies that provide Internet-based services provide."

That drew a sharp rebuke from executives from those companies who insisted they have been taking steps to block terrorist sites. Campaigners for an open Internet also weighed in, saying Ms. May's strategy won't work. "This could be a very risky approach," said the Open Rights Group. "If successful, Theresa May could push these vile networks into even darker corners of the web, where they will be even harder to observe."

The Prime Minister faced criticism from the Labour Party that she was trying to politicize the killings. Labour Leader Jeremy Corbyn blamed part of the problem on the government's move to cut 20,000 police officers over the past seven years and he promised to add 10,000 officers. He also tried to put to bed concerns that he was weak on terrorism, saying "our priority must be public safety and I will take whatever action is necessary and effective to protect the security of our people and our country."

But the bigger issues for now will be confronted by the country's security apparatus, which has come under growing scrutiny in the wake of the renewed terror threat. The main intelligence service, MI5, is already reviewing how it failed to stop the Manchester suicide bomber, 22-year old Salman Abedi, and whether its officers ignored repeated warnings about him. Mr. Abedi killed 22 people and injured more than 100 after blowing himself up outside the Manchester Arena two weeks ago during a concert by pop singer Ariana Grande.

Police have also come under scrutiny for failing to follow up on concerns about Khalid Masood, who killed five people in March when he drove his car onto the sidewalk near the Parliament buildings and stabbed a police officer to death.

"I think we're having a terrible time," said David Videcette, a former London police detective who is now a security consultant. "And there are some difficult questions that we need answers to as to why these people haven't popped up on the radar with the security service, and if they did, why was the assessment wrong."

That's the question Irene Smith wants answered, too. She was among the thousands of people who ran frantically through the streets of the Borough Market area on Saturday night trying to escape the killers. She'd been enjoying a drink with some friends at a pub when she saw people running down the street.

"I thought it was just a street fight, nothing spectacular," Ms. Smith recalled on Sunday. "And then they were running outside shouting, 'Everyone out.'" At that point, Ms. Smith ran outside and saw a woman crying. "I thought she was just panicking so I gave her a hug. And I said 'are you okay' and she said 'I've seen people being stabbed.'"

Ms. Smith then started running. "The most frightening moment was that we didn't know what was happening or what we were running from. We just expected people shooting at our backs. People were saying, 'It's a terrorist attack. Run as fast as you can. Run for your life,'" she said. "People were crying, looking for their friends. It was a bit of an apocalyptic feeling because everyone was just scared."

She wants the government to take tough action to stop terrorists and she was not impressed with Ms. May's response. "What will she do?" she asked. "It's great to say things but what action will she take? It's quite scary. Regardless, I love London so much, even if I have to die, I'm going to stand up for London."

Ms. May has won the backing of the Muslim Council of Britain, which supported her call for tougher action and promised to do more to combat Islamist extremism. "We are ready to have those difficult conversations, as equal citizens with an equal stake in this fight," said the group's secretary-general, Harun Rashid. "We want to turn people's minds away from this death cult. We want to ensure families are not torn apart by being either victims of terrorist outrages, or finding out that someone they knew perpetrated such acts."

But many people such as Jo Marks, who lives in the Borough Market neighbourhood, doubt much can be done by the government or anyone else to stop these kinds of attacks. "I'm afraid that violence is something that's always going to find its way through and the only way to fight it is to try and remember that we're all human beings," she said as she watched police patrol the streets near where the killings occurred. "I think that we all need to pull together and be mature adults about it. The most important thing is continuing a sense of community and caring for each other. And not giving into hatred and anger."

With reports from Brent Jang in Vancouver and from Reuters

London attack victim Chrissy Archibald 'had room in her heart for everyone'
June 3, 2017
Trump criticizes London mayor after terror attack hits city
June 3, 2017
Attack, pause, mourn, carry on: The cycle of terror has become routine
May 26, 2017 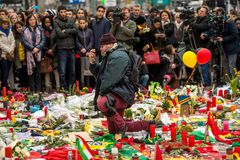 In Photos: Attack on London Bridge
Gallery
June 3, 2017
Follow Paul Waldie on Twitter @PwaldieGLOBE
Report an error Editorial code of conduct
Due to technical reasons, we have temporarily removed commenting from our articles. We hope to have this fixed soon. Thank you for your patience. If you are looking to give feedback on our new site, please send it along to feedback@globeandmail.com. If you want to write a letter to the editor, please forward to letters@globeandmail.com.
Comments are closed