Chances that Britain will exit the European Union were given a boost Sunday when one of the country's most prominent politicians announced he would campaign in favour of leaving the 28-nation club.

After days of keeping the Prime Minister waiting on his decision, the 51-year-old Mr. Johnson finally said he was convinced Britons should vote for the "leave" option that will be on the ballot paper in a June 23 referendum.

"The last thing I wanted was to go against David Cameron or the government, but after a great deal of heartache I don't think there's anything else I can do. I will be advocating Vote Leave," Mr. Johnson told reporters outside his north London home, just 20 minutes after informing Mr. Cameron of his stance via a text message. "I want a better deal for the people of this country to save them money and to take back control."

Betting houses responded by immediately lifting the odds of what's colloquially known as "Brexit" to 33 per cent, from 29 per cent just before Mr. Johnson's announcement. The ballot question will read: "Should the United Kingdom remain a member of the European Union or leave the European Union?"

Opinion polls on the question have produced scattered results, with some Internet surveys showing a narrow lead for the Leave side and most phone polls putting Remain ahead by a comfortable margin. About a fifth of voters say they are still undecided.

A "Leave" vote would jolt an EU already struggling to mend differences over how to deal with the influx of more than a million refugees last year, as well as lingering worries over the future of the euro zone. Britain is the EU's second-largest economy, after Germany.

Mr. Johnson's declaration is a personal blow to Mr. Cameron, coming just 48 hours after Mr. Cameron unveiled a package of reforms – intended as a lure to keep Britain in the union – that he painstakingly negotiated with other EU leaders. The changes include limits to benefits Britain must pay to workers from other EU countries; safeguards allowing London's financial services industry to be exempted from EU regulations; as well as a British opt out from the EU's stated goal of "ever closer union."

Mr. Johnson also spurned a last-minute appeal from Mr. Cameron, who took to television talk shows earlier on Sunday to warn his long-time friend and rival – the two men were schoolmates first at Eton College and then Oxford University – against joining a Leave camp otherwise headlined by rogues from the far-right and far-left of British politics.

"I would say to Boris what I say to everybody else, which is that we're safer, we'll be stronger, we'll be better off inside the EU," Mr. Cameron told the BBC's The Andrew Marr Show on Sunday. "Linking arms with Nigel Farage and George Galloway and taking a leap in the dark is the wrong step for our country."

Mr. Farage is the long-time leader of the UK Independence Party, a euroskeptic movement frequently accused of stirring up anti-immigrant sentiment. Mr. Galloway was expelled from the left-of-centre Labour Party a dozen years ago, and has been barred entry to Canada because of his contacts with the Hamas leaders who control the Gaza Strip.

But while Mr. Johnson often plays the lovable buffoon, he is one of the most influential players in British politics, popular well beyond London, even among non-Conservatives, and known to many simply as "Boris."

He said his decision was based on worries that Mr. Cameron's new deal didn't do enough to protect Britain's institutions and laws from an overreaching bureaucracy in Brussels.

Mr. Johnson's siding with the Leave campaign lays bare the battle lines within a Conservative Party that has been divided for three decades over the United Kingdom's place in Europe. Five other cabinet ministers, including Justice Secretary Michael Gove, have also announced they will campaign for the Leave side.

Much of the party's rank-and-file – including a large number of its parliamentary backbenchers – are hardened opponents of the EU, and Mr. Johnson's announcement was seen by many as the unofficial start of his campaign to succeed Mr. Cameron as Conservative Leader.

Mr. Cameron, who last year led the Conservatives to their first majority government since the early 1990s, has said he will not take the party into the next election, which is due in 2020. Chancellor George Osborne and Home Secretary Theresa May, two other presumed leadership contenders, have both said they will back the Remain side.

Also hanging over the June 23 referendum is the question of what a Leave vote would mean for the unity of the UK itself. While euroskepticism is widespread in England, support for the EU is much higher in Scotland, Wales and Northern Ireland.

Scottish First Minister Nicola Sturgeon said Sunday that if the UK were to vote to leave the EU – and a majority of Scots voted to remain – that would create the conditions for another referendum on Scottish independence.

"I think Scotland's always seen itself as a European county," she said. 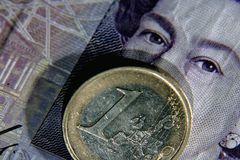