Chris Marinello knows he hasn't made many friends in Germany since he started his relentless quest to get back a painting by Henri Matisse.

"They probably think I'm a very obnoxious lawyer," Mr. Marinello said with a smile during an interview in his London office this week. "But that's what we do here."

The painting, Woman with a Fan, surfaced last fall in Munich as part of a collection of more than 1,400 pieces belonging to a reclusive 80-year-old named Cornelius Gurlitt, whose father sold paintings for the Nazis. German officials seized the artwork during a tax probe, and there were immediate suspicions that many of the pieces, which included works by Monet, Gauguin, Renoir, Picasso and van Gogh, had been looted by the Nazis. There was also outrage around the world that German officials had not released any information about the discovery for two years.

Mr. Marinello had no doubt about the Matisse. It clearly belonged to Paul Rosenberg, a Paris-based art dealer who fled to the United States just before the Germans invaded France, leaving behind more than 400 paintings. Mr. Rosenberg, who died in 1959, had kept a meticulous inventory of his artworks, and his family spent years trying to track down the whereabouts of the collection. They eventually turned to Mr. Marinello for help.

An amateur artist who had spent years dealing with art cases as a lawyer in New York, Mr. Marinello relished the challenge. He began flooding German officials with letters, e-mails, phone calls and requests for meetings. He made representations to the U.S. State Department, the American embassy in Germany and Jewish groups around the world. Nothing seemed to work.

"The German government has not been helpful," he said. "They are overwhelmed. They don't know what they are doing."

At one point, Mr. Gurlitt's lawyer, Hannes Hartung, bluntly told Mr. Marinello that he had no chance of reclaiming the piece. Mr. Gurlitt had acquired the collection in good faith, the German lawyer explained, and there was a 30-year statute of limitations on such matters. International protocol concerning the restitution of artworks looted by the Nazis also did not apply because it only dealt with public collections, not private holdings. So once the Germans finished the tax probe, it looked like Mr. Gurlitt could get his paintings back.

The American had been in this situation before. He'd just spent almost two years negotiating with a museum in Norway about returning another Matisse that belonged to Mr. Rosenberg. The Norwegians also battled on every front, throwing up legal arguments and vainly searching for some documentation to prove Mr. Rosenberg had sold it. They finally relented amid overwhelming evidence the painting had been stolen by the Nazis from Mr. Rosenberg. Last week they handed it back to Mr. Marinello.

Now the Germans appear to be relenting as well. Mr. Gurlitt has a new lawyer who announced on Wednesday that the collector had agreed to return any looted pieces, with the Matisse up first.

Mr. Marinello plans to meet with officials next week to discuss the handover, but he isn't celebrating just yet. "I'll be happy when there is a deal on the table and it's inked and the painting is back with the family – that's when I'll be happy," he said.

It's not clear what the family will do with the paintings. The effort to reclaim the collection has been led largely by Mr. Rosenberg's daughter-in-law Elaine, who is 94, and his granddaughter Anne Sinclair, the ex-wife of former International Monetary Fund head Dominique Strauss-Kahn. Other Rosenbergs have been involved as well in what the family describes as a crusade to reclaim the art as a matter of principle. So far they have managed to recover hundreds of pieces, but the two Matisses are the most significant yet. The one from Norway is estimated to be worth $40-million (U.S.), and the one in Germany as much as $20-million.

"They haven't decided. I haven't asked," Mr. Marinello said about the family's intentions.

He added that he has no qualms about taking works from museums or private collections on behalf of the family. "I felt the pressure in Norway. A lot of Norwegian journalists didn't seem all that pleased," he said. "The only reason it was in Norway in the first place was because Hermann Goering decided he was going to persecute this family and Jews everywhere. That's it."

Mr. Marinello has plenty of cases to keep him busy. There are at least 100,000 pieces of stolen art that are still missing from the war years, and the Rosenbergs may have more claims on the Gurlitt collection. Mr. Marinello is also representing other families in the Gurlitt case.

"I think over the years I've gotten pretty good at getting people to give up looted and stolen artwork because what are you going to do with it?" he said. "It's the right thing to do." 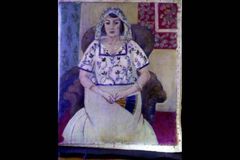