In a quick move to keep racial tensions from boiling over, the U.S. Department of Justice launched an investigation Wednesday into the killing of an African-American man pinned to the ground and shot in the chest by two white police officers in Baton Rouge, La.

Video of the last few seconds of Alton Sterling's life punctuated by the sharp crack of gunfire and the shocked sobbing of a horrified woman who witnesses the killing went viral.

In the grim aftermath of Tuesday's shooting, hundreds of protesters chanted "Hands up, don't shoot" and "Black lives matter" while authorities begged for calm in the sweltering Louisiana heat.

Seeking to avert new waves of racially charged violence, the Obama administration stepped in swiftly, opening a civil-rights investigation, which puts the federal police and the Department of Justice in charge of the probe.

Similar investigations, which often take many months, were opened following the deaths of Michael Brown in Ferguson, Mo., and Eric Garner in New York.

how many more lives do we have to lose before this stops? when is enough, enough? #AltonSterling pic.twitter.com/5Jbwsz6zP3

Civil-rights activists and protesters renewed demands for an end to the stream of police killings of African-Americans, which, while not new, have gained national attention because of the advent of video evidence taken by bystanders.

Although details of the shooting of Mr. Sterling, 37, remain in dispute, the broad outlines of another confrontation between police and an African-American man spiralling quickly out of control and ending with fatal gunfire serves as a grim reminder of a society still riven by race in which skin colour too often equates to higher risk of dying violently.

Mr. Sterling was a regular presence outside the Triple S Food Mart, where he sold homemade CDs and DVDs from a makeshift stand.

According to police, the two white officers were responding to a 911 call reporting a red-shirted man waving a gun and threatening passersby outside a convenience store shortly after midnight.

At least two videos, one apparently taken from inside a car parked outside the store, captured the final moments of the confrontation. Amid shouting, one officer grabbed Mr. Sterling and wrestled him to the ground where both officers seemed to have him pinned down. Then one of the uniformed officers upholstered his handgun, pointed it at Mr. Sterling's chest and fired. As the camera jerked away, the sound of several more gunshots could be heard.

Just before the first shot, an unidentified voice could be heard saying: "He's got a gun! Gun!" Then, after the flurry of gunfire, a woman, apparently in the car, cried: "They shot him."

Several witnesses said the gun was in the pocket of the dead man's pants but it remained unclear if he had reached for it or pulled it out during the confrontation with police. Abdullah Muflahi, an owner of the store who said he witnessed the shooting, told The Advocate newspaper that Mr. Sterling was not holding his gun or touching his pockets during the encounter.

According to a police spokesman, both police officers involved in the shooting, Blane Salamoni and Howie Lake II, were placed on administrative leave pending the outcome of investigations.

Police said they have dash-cam video, bodycam video and store surveillance footage of the shooting that will be turned over to the Justice Department. But a police official said the bodycam footage may not be as good as investigators hoped for because the cameras became dislodged during the scuffle.

In some previous instances of police shootings, video evidence has been suppressed for years.

"Mr. Sterling was not reaching for a weapon," said Edmond Jordan, a lawyer retained by the family. "He looks like a man that was actually fighting for his life."

Louisiana Governor John Bel Edwards appealed for calm but admitted: "The video is disturbing, to say the least."

On Wednesday, he was described by stricken friends and family as an odd but loving father.

He was "a man who simply tried to earn a living to take care of his children," said Quinyetta McMillon, who identified herself as the mother of one of Mr. Sterling's children, a 15-year-old son, Cameron. The teen cried as his mother read a statement outside City Hall.

She called the killing a "murder [that] took away a man with children who depended upon their daddy on a daily basis."

Louisiana Department of Corrections records show Mr. Sterling was convicted in 2000 for carnal knowledge of a juvenile, a felony, and spent about four years in prison. He was required to register as a sex offender. Since then, he had been arrested several times and convicted at least once, in 2011, for unlawfully carrying a firearm.

Opinion
The bullies of Black Lives Matter
May 16, 2018

Opinion
Black Lives Matter is dramatic, unsettling and inconvenient. That’s the point
May 16, 2018

In Photos: Reaction to fatal police shooting in Baton Rouge Gallery
May 16, 2018 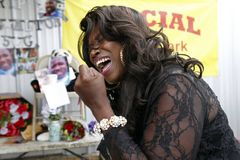