A new poll suggests that a majority of Canadians opposes the Prime Minister's refusal to fund safer abortions in developing countries, even as international concern grows about the state of his G8 maternal health initiative.

The Canadian Press-Harris Decima poll found that 58 per cent of respondents oppose Mr. Harper's exclusion of abortion funding in his drive to improve maternal and child health in poor countries.

That's up from about 46 per cent in March, when a similar question about aid for abortion access was asked. The increase suggests people are taking their time to think through the complex pros and cons before making up their minds, said Megan Tam, vice-president at Harris-Decima.

"It appears that the general sentiment of most Canadians is to have a maternal health policy that includes funding for abortion," she said.

The survey found that opposition to the government's stand was about the same for both men and women, but was stronger in Atlantic Canada and British Columbia than other regions of the country.

Only 30 per cent of respondents said they would support the government's decision, down from about 48 per cent in March.

Mr. Harper has made maternal and child health his key focus for the G8 summit he is hosting in Ontario's cottage country six weeks from now - a priority that was warmly received around the world.

But the initiative quickly got side-tracked in a domestic debate about whether Canada should be funding abortion. Mr. Harper did not give a clear answer until the end of April, when he said Ottawa would not contribute to abortion-related aid projects, but that other G8 countries are free to do so.

The debate has dominated Canadian discussion on the G8 for weeks, culminating in a huge pro-life rally on Parliament Hill last week, where Conservative MPs and thousands of protesters congratulated Mr. Harper on his stand.

As Canadians wrestle with the abortion issue, international aid experts are worried that the momentum to raise much-needed G8 funding for mothers and children is flagging.

Ottawa has yet to set a G8 funding target for its initiative, let alone start raising money beyond its borders or put any forward itself. At the same time, demands on G8 money are growing fast, especially with a bailout for Europe in the works.

So far, G8 development ministers have agreed that each country should come up with its own maternal health initiatives - an approach that gives Ottawa the freedom to side-step funding for abortion.

But there is little indication about how such an effort would be co-ordinated.

In a report released last week, the World Bank warned that donor funding for reproductive health in poor countries has "fallen off the radar" over the past few years.

While development aid for health soared by about 500 per cent between 1995 and 2007, aid for population and reproductive health rose only slightly during the same period, the bank said in releasing a five-year Reproductive Health Action Plan.

"The extent to which the G8 has internalized this as a key priority for development, that is extremely good news (as long as) they deliver," said Julian Schweitzer, acting vice-president of human development at the World Bank.

The best way to bring down maternal mortality is to give women the wherewithal to make choices about when they want to have children, and how many, Mr. Schweitzer said.

That means donor money should be targeted at contraception, reproductive health services and education of girls, he added.

Experts agree that billions of dollars in aid are necessary in order to meet a widely accepted United Nations target to significantly reduce maternal mortality rates by 2015.

Hopes for the G8 initiative led by Canada range from $4-billion to about $15-billion over the next five years. 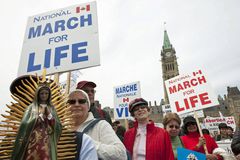