The story of Malala Yousafzai is already the stuff of legend. She's the Pakistani teenager who dared to defy the Taliban, surviving a horrifying assassination attempt to emerge as a symbol of bravery, and a campaigner for girls' education, telling the United Nations last month to send books and pens, rather than tanks, to troubled parts of the world.

And that's not counting this week. On Sunday, she received an invitation to a Buckingham Palace reception with the Queen. On Tuesday, the now 16-year-old published her autobiography, I Am Malala. (The title is a chin-up answer to the Taliban gunman who boarded a school bus last Oct. 9, asking "Who is Malala?" before shooting her in the head). The book immediately shot onto bestseller lists.

Wednesday is the anniversary of the day she was shot. And on Friday, Ms. Yousafzai is the odds-on favourite to become the youngest winner of the Nobel Peace Prize.

If Ms. Yousafzai wins the Nobel, there will be quiet joy in her native Swat Valley – school-aged girls there are reportedly praying in secret for her victory – as well as loud outrage from a Taliban movement that condemned her once more this week as an enemy of Islam and threatened to try again to kill her.

Far away from all that, there might also be celebrations in the offices of the world's biggest public relations firm, Edelman – which lists the likes of Starbucks and Microsoft alongside Ms. Yousafzai in its roster of clients – as well as those of McKinsey & Company, a management consulting firm that makes billions by advising governments around the world.

Ms. Yousafzai's story is certainly worthy of telling. But she's had an unprecedented amount of help getting her message out.

"Her life is a miracle," her father, Ziauddin Yousafzai, told an interviewer this summer. "I think I'm not the only person who owns her as a daughter. She's owned by everybody. She's the daughter of the world."

But would the world have adopted Malala if she had stood up against, say, child labour in the production of iPhones, instead of the friendless Taliban? Or if she'd been wounded by a U.S. drone strike? Or if she didn't speak such fluent English?

The global Malala Movement has led to a backlash in her native Pakistan, where some view her as a tool of the West, used to embarrass their country, culture and religion.

"In certain segments of society in Pakistan, whenever someone is backed by the West, there's an instant suspicion that arises in the minds of Pakistanis," Shiza Shahid, the head of the Malala Fund and a long-time family friend, said in a telephone interview from Islamabad. "There are segments in society who have felt that about Malala, which is unfortunate, because she is a girl whose heart beats very deeply for Pakistan."

It was Mr. Yousafzai, an educator who ran a school for both boys and girls in Swat, who first introduced his daughter to the world. In 2009, he invited a New York Times documentary maker into the family's home to talk about an edict from the Taliban – which then controlled the Swat Valley – banning girls in the region from attending school. An 11-year-old Malala quickly became the star of the show, telling the camera in English, "I want to get my education. I want to become a doctor," before burying her face in her left hand, obviously despairing that she would realize those dreams.

The shooting last year – a brute attempt to silence the girl and her campaign – brought Ms. Yousafzai more attention than ever. As she miraculously staged a full recovery, political heavyweights around the world came to see what her father saw. She was lifted into the global limelight, a Gandhi for Muslim girls.

Among the first to visit Ms. Yousafzai after she was evacuated to a hospital in Birmingham, England, was former British prime minister Gordon Brown, now a United Nations special envoy for global education.

He asked the family what he could do for help, and they requested that Ms. Shahid, who was then working for McKinsey, help them deal with the media storm. Mr. Brown put in a call to McKinsey senior partner Dominic Barton, who had occasionally advised Mr. Brown while he was prime minister, and asked him to lend Ms. Shahid to the Malala Fund.

It wasn't a tough sell. Public relations-savvy businesspeople and politicians knew a winning cause when they saw one and were quick to jump on board. Edelman took up Ms. Yousafzai's cause pro bono, setting up a five-person "Malala press office" in London, headed by well-known speechwriter Jamie Lundie. They've been carefully doling out media access to their client to coincide with her book launch and Nobel Prize week. There's still a three-week waiting list of journalists who want to talk to her.

Megan Smith, the high-profile vice-president of Google, joined Ms. Shahid on the Malala Fund board, and the fund's first donor was actress Angelina Jolie, who put $200,000 toward the education of 40 girls in the Swat Valley. Last year, while Ms. Yousafzai was still in hospital, Prime Minister Stephen Harper was one of the first global leaders to sign a petition calling for her to be awarded the Nobel Peace Prize.

Jonathan Yeo, who sat down with Ms. Yousafzai to paint her for a portrait that hangs in Britain's National Portrait Gallery, says he initially had reservations about the publicity machine swirling around his subject.

"I had concerns generally. She's this figure that so many other people are projecting their ideas onto. ... There are people circling around her who are looking to, perhaps, piggyback on the goodwill around her and the purity of her cause. People looking to promote their own causes or simply launder their reputations," Mr. Yeo said.

But his worries were eased after he met Ms. Yousafzai. "She sees it all, and she's very clear about it," he said. "I was impressed by how wise beyond her years she was."

Ms. Shahid, who first met an 11-year-old Malala when she was one of 20 girls who attended an educational retreat organized for girls from the Swat Valley, says the organizations and politicians who have gravitated to Ms. Yousafzai simply recognized the potency of her story.

"A lot of people were already fighting for this [universal education for girls], but in Malala they found the most perfect symbol of all that they were fighting for, because her story showed the tragedy of what is happening – thousands of girls across the world are being denied their voice, denied their basic rights. But it also showed just what is possible if a girl is educated, if she is given back her power."

On being a girl

When I was born, people in our village commiserated wth my mother and nobody congratulated my father. ... I was a girl in a land where rifles are fired in celebration of a son, while daughters are hidden away behind a curtain, their role in life simply to prepare food and give birth to children.

On being nominated for the Nobel Peace Prize

On the shelves of our rented living room are awards from around the world – America, India, France, Spain, Italy and Austria, and many other places. I've even been nominated for the Nobel Peace Prize, the youngest person ever. When I received prizes for my work at school I was happy, as I had worked hard for them, but these prizes are different. I am grateful for them, but they only remind me how much work still needs to be done to achieve the goal of education for every boy and girl. I don't want to be thought of as the "girl who was shot by the Taliban" but "the girl who fought for education."

To keep me occupied [in hospital] they brought me a DVD player. One of the first movies they got me was Bend It Like Beckham, thinking the story of a Sikh girl challenging her cultural norms and playing football would appeal to me. I was shocked when the girls took off their shirts to practice in sports bras and I made the nurses switch it off.

On her desire to be a politician

I will be a politician in my future. I want to change the future of my country and I want to make education compulsory. I hope that a day will come [when] the people of Pakistan will be free, they will have their rights, there will be peace and every girl and every boy will be going to school.

- From an interview with the BBC, broadcast this week

On the man who shot her

He was young, in his 20s … he was quite young, we may call him a boy. And it's hard to have a gun and kill people. Maybe that's why his hand was shaking. Maybe he didn't know if he could do it. But people are brainwashed. That's why they do things like suicide attacks and killing people. I can't imagine it – that boy who shot me, I can't imagine hurting him even with a needle. I believe in peace. I believe in mercy.

- From an interview with the Guardian published this week

- From the BBC interview 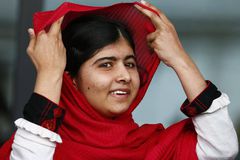 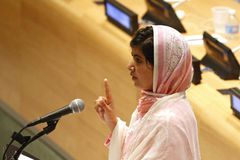 What a young Canadian heard when Malala spoke
July 14, 2013

Opinion
The Taliban wanted Malala’s silence, but gave her a megaphone
July 12, 2013

‘They thought that the bullet would silence us’: Malala addresses UN Youth Assembly
July 12, 2013