Security forces rounded up more suspects Wednesday in the deadly Manchester concert blast and soldiers fanned out across the country to national landmarks as an on-edge Britain tried to thwart the possibility of additional attacks.

Officials scoured the background of the British-born ethnic Libyan identified as the bomber, saying he was likely part of a wider terrorist network. Additional arrests were made both in Britain and in Libya in the bombing that killed 22 people and wounded scores more.

Among those taken into custody in Libya were the suspected bomber's father and his younger brother, the latter of whom confessed to knowing "all the details" of the attack plot, Libyan anti-terror authorities said.

Opinion: The Manchester attack will change British life for the worse

"I think it's very clear this is a network we are investigating," Chief Constable Ian Hopkins of the Manchester Police said as authorities raided British properties thought to be connected to Salman Abedi, the 22-year-old suspected bomber who grew up in Manchester and died in the attack.

British Home Secretary Amber Rudd said Abedi "likely" did not act alone in the strike at the close of an Ariana Grande concert Monday night and that he had been known to security forces "up to a point." Meanwhile, officials probed possible travel by the alleged bomber, looking for clues to new threats.

Government officials said nearly 1,000 soldiers were deployed to Buckingham Palace, Parliament and other high-profile sites across the country. Britain's terror threat level was raised to "critical" — the highest level — on Tuesday over concern another attack could be imminent.

French Interior Minister Gerard Collomb said Abedi was believed to have travelled to Syria and had "proven" links to the Islamic State group, which claimed responsibility for the attack. British officials, however, have not commented on whether Abedi had links to IS or other extremist groups.

British authorities were probing whether Abedi had ties to other cells across Europe and North Africa, according to two officials familiar with the case who spoke on condition of anonymity because they were not authorized to speak about the ongoing investigation.

They said one thread of the inquiry involved pursuing whether Abedi was part of a larger terror cell that included Mohamed Abrini, otherwise known as "the man in the hat," with connections to the Brussels and Paris attacks. Abrini visited Manchester in 2015.

"It looks like we're not dealing with a lone wolf situation. There's a network — a cell of ISIS-inspired terrorists," said U.S. Rep. Mike McCaul, R-Texas, chairman of the House Homeland Security Committee. He said the bomb's construction suggested a "level of sophistication" that might indicate foreign training.

Six additional arrests were made in Britain on Wednesday as the sprawling investigation extended to Libya, where Abedi's father and 18-year-old brother were detained in Tripoli. The father, Ramadan Abedi, denied his son had links to militants in an interview with The Associated Press before he was taken into custody, saying, "We don't believe in killing innocents."

The elder Abedi was allegedly a member of the al-Qaida-backed Libyan Islamic Fighting group in the 1990s, according to a former Libyan security official, Abdel-Basit Haroun.

The Libyan anti-terror force that arrested the men said in a statement that the brother, Hashim Abedi, 18, confessed that he and his brother were linked to the Islamic State group and that he was aware of the arena bombing plan. The anti-terror force said the father had not been charged, but was taken in for questioning.

A second brother, Ismail Abedi, 23, was taken into custody in Manchester a day earlier.

The suspected bomber grew up in Manchester's southern suburbs and once attended Salford University there. Neighbors recalled him as tall, thin and quiet, and said he often wore traditional Islamic dress. Among investigators' areas of interest is how often Abedi travelled to Libya, which has seen an eruption of armed Islamist groups since dictator Moammar Gadhafi was overthrown and killed in 2011.

Before his arrest, Abedi's father said he had last spoken to his son five days ago and he sounded "normal." He said his son was getting ready to visit Saudi Arabia for a short Umrah pilgrimage then planned to head to Libya to spend the Islamic holy month of Ramadan with his family. He said his son last visited Libya about six weeks ago and had never gone to Syria. He denied ties to any militant groups or suggestions of extremism.

"We aren't the ones who blow up ourselves among innocents," he said. "We go to mosques. We recite Qur'an, but not that."

At Manchester's Didsbury Mosque, where the Abedi family worshipped, the bombing was condemned and reports that the suspected bomber had worked there were denied. Azhar Mahmoud, who prays at the mosque in southern Manchester, said it was "horrible" that Abedi was associated with it.

"Wherever he got that, he didn't get it from this mosque," he said, adding that the imam regularly preached against radicalization.

British Prime Minister Theresa May chaired a meeting Wednesday of her emergency security cabinet group to talk about intelligence reports on Abedi and concerns that he might have had outside support. Police raided homes believed to be connected with the investigation.

At one apartment building in Manchester, heavily armed police swarmed in and a controlled explosion was heard. At another property, a house a 10-minute walk from where Abedi lived, neighbours said they were awakened by a loud noise and saw a man hauled away in handcuffs.

"There was a policeman, armed policeman, shouting," neighbour Omar Alfa Khuri said. "And I realized there is something wrong here."

Across London, troops fanned out and authorities reconsidered security plans. The changing of the guard ceremony at Buckingham Palace was cancelled so police officers could be re-deployed. The Palace of Westminster, which houses Parliament, was shuttered to those without passes, and tours and events were cancelled until further notice. Armed police patrolled outside St. Paul's Cathedral in London, another popular tourist spot.

For a second night, a throng of people filled a Manchester square for a vigil for the victims. Muslim, Christian and Jewish leaders echoed a message that extremists wouldn't drive a wedge among the city's religious groups. People lifted their hands in the air during a moment of silence.

"There are no divisions here tonight," Irfan Chishti, the imam of Manchester's biggest mosque, told the crowd.

Officials said all of the bombing victims have been identified, but names were being withheld until autopsies were completed.

Still, their stories began to emerge: Michelle Kiss, a mother of three whose "family was her life;" Nell Jones, an "always smiling" teenager; Martyn Hett, who packed life "to the brim with his passions;" Jane Tweddle, a "bubbly, kind, welcoming" receptionist. The youngest known of those killed was just 8. Besides the dead, the number of people who sought medical help after the attack was raised to 119. Officials said 64 people remained hospitalized, including 20 who were critically injured. 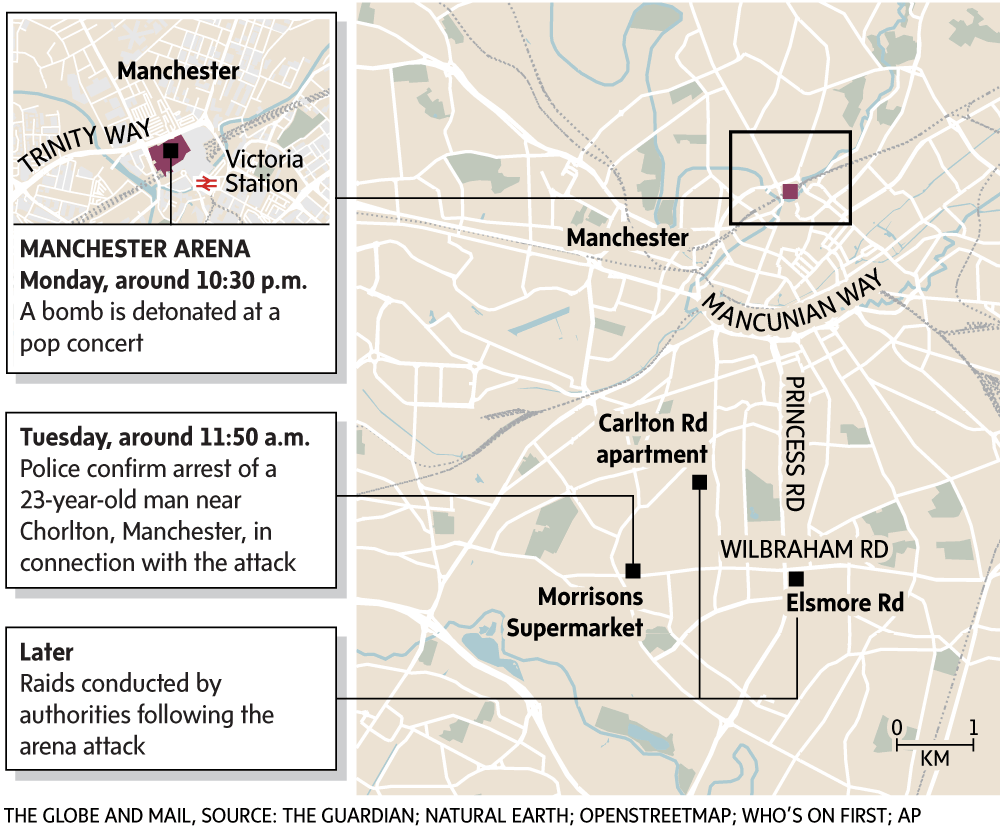 Images from the Manchester arena attack
Gallery
May 23, 2017
Manchester suspect latest second-generation citizen to attack European city
May 23, 2017
Opinion
The Manchester attack will change British life for the worse
May 23, 2017
Report an error
Due to technical reasons, we have temporarily removed commenting from our articles. We hope to have this fixed soon. Thank you for your patience. If you are looking to give feedback on our new site, please send it along to feedback@globeandmail.com. If you want to write a letter to the editor, please forward to letters@globeandmail.com.
Comments are closed