Wherever Christopher (Dudus) Coke is hiding in the heavily fortified neighbourhood and fief known as Tivoli Gardens, whether he's surrounded by armed henchmen, ducking in a crawlspace, or peering from a rooftop at the police officers in flak jackets below, Jamaicans are sure of one thing: He's thinking of his father's charred corpse.

The late Lester Coke, who went by the alias Jim Brown, and his Shower Posse gang ruled Tivoli Gardens with an iron fist - along with the steadfast support of then-prime-minister Edward Seaga - throughout the 1980s. But when he was finally arrested in 1992, and set to be extradited to the United States, a bizarre thing happened in his cement jail cell. He burned to death, despite the absence of flammable materials.

Jamaicans have long suspected that Jim Brown was murdered because he knew too much about the ties between Jamaican politics and its criminal underbelly. (As his lawyer said after his death, "If you believe Jim Brown just burned to death by accident ... you'll believe in the tooth fairy.") His son won't allow himself to be caught in the same situation, experts say.

"Dudus has never forgotten that incident," said Richard (Dickie) Crawford, a political analyst and lecturer at the University of the West Indies campus in Mona, Jamaica. "That's why he's being so scientific and calculating - to try and protect himself."

Mr. Coke, the current leader of the Shower Posse and the most wanted man in Jamaica, is said to be a short, serious man who has eschewed the glitz and prominent public profile that so many other "dons" of Jamaica's ghettos have carefully cultivated.

For four days, Jamaican security forces have inched their way into Tivoli Gardens, a lawless, barricaded slum, where the junior Mr. Coke had ruled with impunity, thanks to his close political connections with the ruling Jamaican Labour Party and its Prime Minister, Bruce Golding.

His firm grasp came to a halt suddenly last week, when the embattled Mr. Golding was forced to order Mr. Coke's extradition to the United States, which has been seeking to prosecute Mr. Coke on a litany of drug-trafficking offences since August. Mr. Golding had refrained from approving the extradition, ostensibly because U.S. authorities had relied on "illegal wiretaps" to secure Mr. Coke's criminal indictment. In reality, political observers say, he was indebted to the alleged gangster for votes he guaranteed at election time.

It wasn't until it emerged that Mr. Golding's party had paid a U.S. law firm $50,000 to discourage the Obama administration from extraditing Mr. Coke that the Jamaican Prime Minister was forced to apologize to the nation, and finally ordered authorities to sniff him out.

The bloody chaos that has ensued, with reports of 44 civilians killed by gunfire, has put a magnifying glass on the unique system of "client-patron politics" that regularly spawns garrisoned monsters such as Mr. Coke and his father. The birthing of those monsters, experts say, can be traced back to the Cold War.

In the 1970s, then-Jamaican-prime-minister Michael Manley moved his country far to the left, publicly sympathizing with Fidel Castro's Cuba and openly accusing the United States of trying to undermine Jamaica's stability.

In a move that mirrored similar operations in Panama and other Latin American countries, U.S. intelligence agencies lent support to emerging right-winger Edward Seaga, then-leader of the Jamaican Labour Party. In a 1977 investigative report, Penthouse magazine, citing U.S. intelligence sources, described how the State Department sought to capitalize on the spreading violence between Mr. Coke's Shower Posse and the garrisoned neighbourhoods that supported Mr. Manley: "Shipments of guns and sophisticated communication equipment begun to be smuggled into the island. In one shipment alone, which was grabbed by Manley's security forces, there were 500 submachine guns."

But after Mr. Seaga's nine-year stint as prime minister in the 1980s, the U.S. justice system decided that their ally's enforcer in Tivoli Gardens had become too powerful, as Mr. Coke's violent network of drug dealers and gun runners boiled over onto U.S. soil. After the elder Mr. Coke's capture and mysterious death in 1992, the funeral procession numbered in the tens of thousands. Marching next to his casket was Mr. Seaga, who told reporters that the dead man had been "a protector" of the people.

It was U.S. foreign policy that gave rise to the system that propped up the late Mr. Coke and his now fugitive son, said Mr. Crawford, the political analyst. "It is one of the supreme ironies of life, as far as Jamaica is concerned," he said.

Before he was forced into hiding, the younger Mr. Coke was known to pop his head up for the occasional passa passa, a routine street party featuring popular dancehall music. On paper, his business interests range from construction to the music industry.

You'd be forgiven for thinking that a suspected drug lord with the last name Coke would require no nicknames, but according to the indictment obtained by prosecutors in New York, there are many. In addition to Dudus, he also goes by Presi, General, and Shortman, among others. 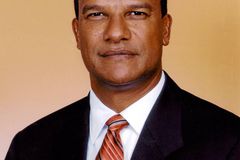 Jamaica must disarm the garrison
May 1, 2018 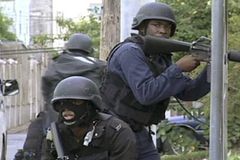 Jamaican clashes reveal ties between politics and crime
May 1, 2018 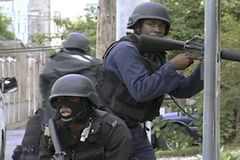