At a Hilton hotel last week in Brisbane, Australia, they talked for six hours, at first without any aides or other officials present.

But whatever transpired at the late-night meeting between Russian President Vladimir Putin and German Chancellor Angela Merkel, the outcome wasn't heartening. In a speech in Australia two days later, the normally measured Ms. Merkel was blunt.

The crisis in Ukraine was not just a regional matter, but something that affects "all of us," she said. Russia's actions represented an unacceptable return to a Cold War paradigm of dividing the world into spheres of influence, she added, with worrisome consequences for countries such as Moldova, Georgia and the countries of the western Balkans. Moreover, Europe, the United States and others must remain united in inflicting economic pain on Russia, she said, for what could be a very long time.

She remarked pointedly that Germany had observed several notable anniversaries this year, including the fall of the Berlin Wall in 1989. "All of a sudden we see ourselves confronted with a conflict that seems to be an attack against the very heart of our values," Ms. Merkel said. "We have to prove that we've learned something from the past."

Ms. Merkel's straight talk is a sign that she has lost patience with Mr. Putin, with whom she has spoken more than 30 times since the crisis began. She has been a chief proponent of continuing dialogue with the Russian leader, but in her latest remarks, she indicated that Western countries also need to start preparing for the long haul. "This is not something that is going to end no matter what the settlement of the issue in Ukraine," said Joerg Forbrig, an expert on eastern Europe at the German Marshall Fund of the United States. "Russia is basically driving a systemic confrontation here. She senses that."

Mr. Putin, 62, and Ms. Merkel, 60, were both shaped by their experiences of the Cold War, with radically different results. A theoretical physicist and the daughter of a pastor in East Germany, Ms. Merkel emerged as a conservative politician with an abiding commitment to the right to self-determination.

Mr. Putin "recognizes Merkel as the only really strong person in this crisis, not Obama," said Stefan Meister, a Russia expert at the German Council on Foreign Relations in Berlin. "He believes Obama is a very weak politician."

Ms. Merkel is also not easily provoked. "The alpha-male thing is something Putin always wins," Mr. Forbrig said. "Merkel doesn't go there. He's driven nuts by the calmness that she has. It doesn't give a surface for friction."

The two leaders have no need for interpreters. Ms. Merkel speaks Russian after growing up in East Germany; Mr. Putin speaks German after serving as a KGB agent in Dresden. Their relationship is not close, experts say, but professional. There have been a few notable tensions along the way: Back in 2007, during a meeting at his country home, Mr. Putin reportedly let his black Labrador loose, knowing Ms. Merkel harbours a fear of large dogs.

Yet Mr. Putin appears to have miscalculated Ms. Merkel – and Germany. While the country has strong economic ties to Russia, to the tune of €77-billion ($107-billion) in annual trade, its government has been a leading voice in favour of sanctions. German business lobbies have complained vociferously about the impact of the trade restrictions, but Ms. Merkel has stated that the costs of the government's policy to corporations are outweighed by the costs of doing nothing. The German public is backing her up. Ms. Merkel's approval ratings, after nearly a decade as Chancellor, touched an all-time high in September. A poll conducted in November found that 77 per cent of Germans felt that Russia couldn't be trusted as a partner.

Gernot Erler, a member of Germany's parliament, the Bundestag, who acts as its liaison to Russia, said that a recent trip to Moscow showed signs of a continually deteriorating dialogue. The fact that Germans are "not willing to accept the annexation of Crimea as a reunification comparable to that in Germany leaves our Russian interlocutors puzzled," he said. Mr. Erler added that for the first time ever, members of the Russian parliament, the State Duma, are systematically refusing to have any contact with their German colleagues.

"The Germans have for many years had the illusion they could act as a bridge" between Russia and the West, asserted Mr. Forbrig of the German Marshall Fund. "That illusion was shattered this year. Whatever the Foreign Ministry or government tried in the way of mediation ultimately failed."

Ms. Merkel's task now, he said, is to rally other European countries to support a further round of sanctions should Mr. Putin take further aggressive moves in Ukraine, as now seems highly likely. She can also prepare for other contingencies: how Europe would react to a shut-off of natural gas supplies from Russia, for instance, or how it will counter Russian pressure on countries such as Moldova, who want closer ties with the EU.

Ms. Merkel, for her part, believes the road will be a long and difficult one. "Those that put the right of the stronger before the strength of the law" must not be allowed to prevail, she said earlier this week in Australia. And just because the crisis cannot be solved with military force does not mean there is no solution, she added.

Opinion
Why Russians may soon tire of Putin’s antics
November 14, 2014 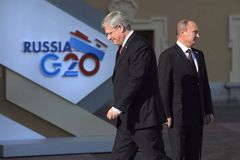 What Putin learned when the Berlin Wall fell
November 14, 2014