If U.S. President Donald Trump attempts to impose unfavourable terms of trade, Mexico may retaliate by ceasing to co-operate on drug enforcement, migration control, security and intelligence, a Mexican cabinet minister told The Globe and Mail in one of his government's most explicit warnings to date in the rhetorical battle with the new U.S. administration.

"There is so much at stake for the interest of the U.S. as a country," Mexico's Economy Minister Ildefonso Guajardo said in an interview in his office in the country's capital.

"We have been a great ally to fight problems with migration, narcotics … If at some point in time things become so badly managed in the relationship, the incentives for the Mexican people to keep on co-operating in things that are at the heart of [U.S.] national-security issues will be diminished.

Opinion: What Mexico – and Canada – stand to lose in the Trump years

"You cannot ask me to [accept poor] conditions in terms of trade and then request my help to manage migration issues from other nations or … the prosecution of criminal activities and narcotics."

However, Mexico has for the past three years been providing a sort of outsourced border control service, 3,000 kilometres to the south, called Programa Frontera Sur. The United States has given Mexico more than $86-million (U.S.) in equipment and training to set up a sort of dragnet across the southern states of Chiapas, Oaxaca and Veracruz to stop migrants fleeing violence in Central America. In addition, Mexico has been growing in popularity in recent years as a route for migrants and refugees from the Middle East, South Asia and Africa headed for the United States.

"Right now there are many more Mexicans coming back than there are leaving and the great challenge is the flows of every other nationality coming through Mexico," Mr. Guajardo said.

Frontera Sur has been criticized by Mexican human rights organizations because it has little or no security benefit for Mexico, and contravenes obligations Mexico has as a signatory to international convention on the rights of migrants and refugees.

Now, the minister suggested, Mexico could stop doing the enforcement and allow the migrants to proceed north on the train and bus routes they used to take unhindered to the northern border.

This is one key bargaining chip Mexico holds; the other is assistance with the war on drugs, co-operation which is unpopular and blamed for much of the astronomical rate of violence in the country. Since 2006, the Mexican government has worked to dismantle narcotrafficking cartels in order to prevent the flow of drugs from reaching its northern neighbour. The U.S. Drug Enforcement Administration has a massive presence in Mexico, with offices and agents across the country.

In addition, there is currently close co-operation between security and intelligence agencies in the two countries: The United States has agents in Mexican detention centres screening migrants who are from Muslim-majority countries, for example.

"So there are many things at stake that cannot be undervalued or undermined," Mr. Guajardo said.

"And that's why my President, with the principles that he gave us for these bilateral dealings, he was very clear in saying that this negotiation has to be figured out with all items considered."

The Minister said the anti-Mexico rhetoric from the Trump administration, while just words, is nevertheless undermining the strong and favourable relationship that the two countries developed in the NAFTA years.

"That type of rhetoric can have a damaging consequence … it will be very foolish to continue."

On Jan. 23, as Mr. Trump reiterated his intention to build a new wall along the U.S.-Mexico border and to force Mexico pay for it, perhaps through a 20-per-cent tax on imports, the Mexican President suggested that he might reconsider bilateral co-operation.

"We'll bring to the table all topics: trade, yes, but also migration and security topics, including the security of the border, terrorist threats, and illegal trafficking of drugs, arms, and cash," Enrique Pena Nieto said. 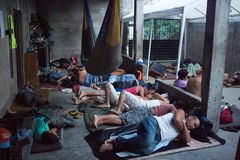 Trump’s policies may reverse the flow of migrants in Latin America
February 3, 2017
Follow Stephanie Nolen on Twitter @snolen
Report an error Editorial code of conduct
Due to technical reasons, we have temporarily removed commenting from our articles. We hope to have this fixed soon. Thank you for your patience. If you are looking to give feedback on our new site, please send it along to feedback@globeandmail.com. If you want to write a letter to the editor, please forward to letters@globeandmail.com.
Comments