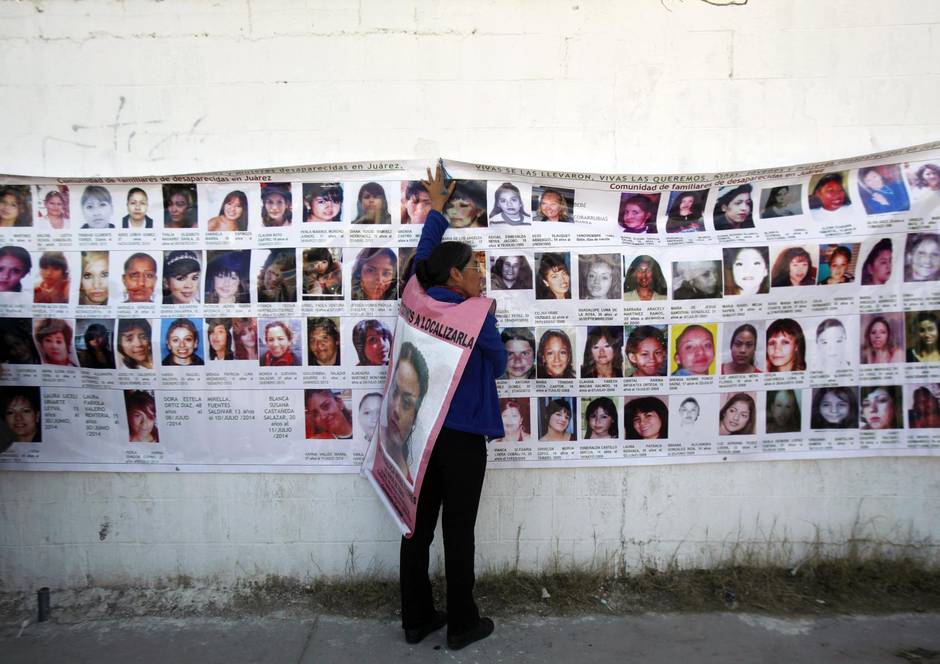 A woman holds onto a banner with the photographs of missing women in Ciudad Juarez January 28, 2015. (Reuters)
Mexico’s
missing and murdered
The numbers are staggering: Six women killed every day, according to one organization. Over the past two decades, reports Brooke Binkowski in Mexicali, Mexico, the killing or disappearance of women has become so frequent, a new term has entered the country’s lexicon: femicidio
MISSING AND
MURDERED
Searching for the lost
This story is part of an ongoing Globe and Mail investigation into the hundreds of missing and murdered indigenous women in Canada.
More from the project

The woman’s body appeared in the middle of March.

She had been left next to a sewage canal in Mexicali, a Mexican city that borders the dry and dusty Imperial Valley in California. There was a bag over her head, her hands and feet tied with duct tape. She was the eighth woman to have been killed in the city since the beginning of 2015 – as of June, 12 have been murdered. Still more have vanished without a trace.

Mexicali, the capital of Baja California state, is not unique among border cities. All along the United States-Mexico border, women and girls are going missing. They are often of indigenous descent, brought north from impoverished rural areas by the lure of better economic prospects and the possibility of crossing into the U.S. There is also a strong element of structural racism that contributes to the apathy of Mexican authorities when indigenous women disappear, critics say.

Sometimes they aren’t found, but other times their bodies turn up in the desert, desiccated by the heat, or dumped in trash heaps, or left under bushes. The murders of women have reached such epidemic proportions in the past two decades that a new term has entered Mexico’s lexicon: femicidio, or femicide. The Mexican government claims a massive backlog on missing and murdered women cases means many deaths remain unsolved.

“This issue’s been going on for a long time … the mistreatment of women, especially women of colour, the abuse of women, the disappearance of women. And it’s not only happening on the U.S.-Mexico border, it’s also happening on the U.S.-Canadian border,” says Enrique Morones who runs Border Angels, a volunteer group based in San Diego, that fights for immigration reform. “But you don’t hear those stories, and those stories are important that they be told.”

In Ciudad Juarez, a city across the border from El Paso, Tex., Marisela Ortiz Rivera is trying to make sure those stories are heard. She’s the co-founder of a group whose name translates into English as May Our Daughters Return Home, launched after her student, 17-year-old Lilia Alejandra Garcia Andrade, was abducted and murdered in 2001. She began the group with Lila’s mother, Norma Andrade.

Silvia Banda walks near a mural depicting her missing daughter Fabiola Janet Valenzuela Banda (L) in Ciudad Juarez May 10, 2015. Mothers and other members of the group"Fighting until we find them" (Luchando hasta encontrarlas) launched a campaign by having the faces of their missing daughters painted on walls in different neighbourhoods of the city, according to local media. (Reuters)

“There are various aspects of this extreme violence against women here,” Ms. Ortiz Rivera says. “There’s that machista culture, that male chauvinism, which is responsible for domestic violence, street violence, violence against women they don’t know. But there’s also groups – big syndicates – that exist on the border, that exist to kidnap and sell women. And there’s impunity … it’s big business.”

In Canada, the RCMP have identified more than 1,100 cases of missing and murdered indigenous women since 1980. A report issued by the Mounties on June 19 identifies family violence as the foremost cause of the disappearances and murders. The Native Women’s Association of Canada has long urged the government to examine the broader systemic causes of the violence. In a letter to the United Nations Permanent Forum on Indigenous Issues this spring, it stated: “The social and economic marginalization of Indigenous women and girls not only makes them prey for violent men, but is also used by officials as a justification for failing to protect them.”

In Mexico, May Our Daughters Return Home organizes demonstrations to bring attention to the disappearances, and pressures the government and the global community to do more to help victims of gender crime. Their visibility made Ms. Ortiz Rivera and Ms. Andrade targets almost immediately.

“We received so many death threats, that we would be murdered, that our families would be murdered,” Ms. Ortiz Rivera says. That same year, Ms. Andrade was shot several times by a group of men as she left work, and a few months after that, slashed in the face with a knife while supposedly under police protection. Both women continue their work, but Ms. Ortiz Rivera now lives in El Paso, on the U.S. side of the border.

Juarez has been nearly synonymous with femicides for more than a decade, but its notoriety overshadows the same problems along the rest of the border, which spans four U.S. states – California, Arizona, New Mexico and Texas – and six Mexican states, Baja California, Sonora, Chihuahua, Coahuila, Nuevo Leon and Tamaulipas. (The only area in Mexico with a higher incidence of violence against women is the crime- and corruption-ridden southern state of Guerrero.)

A man hangs up a banner showing photographs of missing and dead women in Ecatepec April 23, 2013. (Reuters)

According to the UN, more than 2,500 deaths of women in Mexico every year can be attributed to gender-targeted violence. The National Citizen Femicide Observatory, or OCNF, says at least six women are targeted and killed every day in Mexico. Of those, less than a quarter are investigated. Of those investigations, fewer than 2 per cent lead to a sentence.

Mexico’s police have dismissed these deaths and disappearances as a side effect of drug use or sex work. The government also claims that many of the women who disappear are actually in the U.S., living and working under the radar, and that there is no way to find them – an assertion scoffed at by friends and family of the missing.

Mexico’s attorney general’s office says that budget cuts and bureaucratic foul-ups have created a years-long accumulation of cases that need investigating. No one seems to know exactly how many people are missing in the country, although Human Rights Watch says at least 27,000 have gone missing since 2006.

“Even though the government is doing things, it is not enough. The only thing … families want to know is where the missing people are,” says Eliana Garcia Laguna, a politician and human-rights attorney who worked on missing-persons cases for the attorney general’s office until she resigned in May.

The backlog of cases has spurred citizens to begin doing their own investigations. “We work with relatives directly,” says geneticist Ernesto Schwartz, 33, who is from Mexico and works as a research fellow at England’s Durham University. He co-created Citizen-Led Forensics, Mexico’s first independent DNA bank.

“Most of the relatives that are governing our project are in Tamaulipas, a very dangerous area, Monterrey, Coahuila, in the north part of Mexico … even though this isn’t about Juarez and other high-profile parts, I think – I hope – that we have an impact in the whole region.”

Members of a Mexican forensics team stands by a body bag which contains the body of a woman who was shot in the head on the outskirts of Ciudad Juarez in Chihuahua, Mexico which is an area infamous for many gruesome murders of women. (ZUMA Press)

There are glimmers of hope. Mexico’s government recently provided Citizen-Led Forensics with DNA kits and some investigative help in Mexico’s southern state of Guerrero, in which at least 20 mass graves have been found since last September, when people began looking for 43 vanished student teachers from Ayotzinapa.

At the same time, an influx of women and families asking for asylum in the United States in the past year has brought international scrutiny to the violence and inequality that plagues parts of Mexico and Central and South America.

In the state of Baja California, prosecutors brought their first femicide case against a man accused of strangling his girlfriend, setting the stage for legal precedents that may reverberate all along the border, and beyond.

Ms. Ortiz Rivera, the schoolteacher turned activist, said that despite the threats and fear she lives with on a daily basis, she intends to keep pressure on the Mexican government and the international community.

“The corruption that exists … in the murders and disappearances, it’s all met with impunity because the corruption among authorities is so entrenched that any real investigation would bring down this entire, profitable network,” she said.

Robin Reineke works out of Arizona to help find and identify remains of migrants who die crossing into the United States.

Ms. Reineke, a doctoral candidate in anthropology, co-founded the Tucson-based Colibri Center for Human Rights, a non-profit organization that does similar work to that of Citizen-Led Forensics, only in the U.S. She says while it’s rare for them to find migrants who have been murdered – usually they die from hunger, thirst or exposure to the elements – the people they find are victims of a deeper, more subtle violence.

“Basically, if you look at the quotas, there isn’t a legal way [into the United States],” said Ms. Reineke. “The service entrance to America is through the desert, and what U.S. federal policymakers did in the nineties was made that crossing deadly.”

In the 1990s, the U.S. Border Patrol began tightening security around checkpoints in Texas and California. Operation Hold The Line and Operation Gatekeeper added more fencing and surveillance to the busiest known regions for undocumented entry. By 1997, Congress had effectively doubled both the Immigration and Naturalization Service’s budget and number of Border Patrol agents.

The result of the additional staffing and fences pushed hopeful migrants deeper into the hot deserts of the borderlands, dramatically increasing the number of deaths due to exposure there.

“It’s mind-boggling to me how acceptable this appears to be to the American public,” said Ms. Reineke.

According to U.S. government statistics, there have been more than 6,330 migrant deaths while crossing into the country since 1998. However, many more people remain unaccounted for. Many families of the missing already living in the United States are reluctant to draw attention to themselves by asking the government for help, as they fear deportation. Reineke’s group not only works to identify human remains in the desert, but to track down and notify their families, as well.