Another billionaire, former New York mayor Michael Bloomberg, is mulling running for president as an independent, adding another odd twist to an already-bizarre election campaign.

Mr. Bloomberg's bid depends on how well – or poorly – the current front-runners, Hillary Clinton and Donald Trump, are faring.

Apparently, Mr. Bloomberg is both appalled and intrigued by the prospect of Mr. Trump, the right-wing bombastic New York property magnate, facing Vermont Senator Bernie Sanders, the avuncular populist whose leftist insurgency is threatening to upset Ms. Clinton. Accordingly, he believes that there is an opening for a pragmatic centrist if both parties select nominees from the fringes of the political spectrum, meaning Mr. Sanders on the left and either Mr. Trump or Texas Senator Ted Cruz on the right.

Although unlikely, the possible Bloomberg scenario would pit three of the oldest candidates in U.S. presidential history – two billionaires and a self-avowed socialist – against each other in a battle of the septuagenarians. On election day, Mr. Sanders will be 75, Mr. Bloomberg will be 74, and Mr. Trump, the youngest, will be 70. The oldest person ever elected president was Ronald Reagan, who was 69. Ms. Clinton would also be 69 next November.

Mr. Bloomberg, a social liberal who poured millions into gun-control campaigns, but a fiscal conservative who stridently defends Wall Street, has previously mused about running for the presidency as a centrist independent, but he always shelved the notion as unachievable.

Originally a registered Democrat, he was three-term mayor of New York for 12 years, winning first as a Republican and later as an independent. His net worth is estimated at $41-billion and he was ranked the world's 13th-richest person by Forbes magazine in 2013.

Third-party candidates have an unbroken history of quixotic failure in U.S. presidential elections, but Mr. Bloomberg reportedly sees a unique set of circumstances emerging that might make an independent run viable.

He has given himself an end-of-March deadline. By then, it should be clear whether Mr. Trump and Mr. Sanders are emerging as the likely Republican and Democratic nominees. If so, according to sources close to Mr. Bloomberg, who first disclosed the media billionaire's renewed interest in running, then there could be an opening for a centrist.

Much apparently depends on whether Ms. Clinton, the former first lady who, despite being widely considered the front-runner in 2008, was trounced by Barack Obama, is similarly upset this time by Mr. Sanders.

"Mike Bloomberg for president rests on the not impossible but somewhat unlikely circumstance of either Donald Trump or Ted Cruz versus Bernie Sanders," Ed Rendell, a former chairman of the Democratic National Committee, told The New York Times, which first reported that Mr. Bloomberg was again considering a run for the presidency. "If Hillary wins the nomination, Hillary is mainstream enough that Mike would have no chance," he added.

Mr. Trump dared his fellow New Yorker to try. "I would love for Michael to do it," he said, adding: "I'll beat him."

Mr. Sanders was even more enthusiastic, saying the prospect of two fabulously wealthy New Yorkers running against him would put him in the White House. "Two multibillionaires running for president of the United States against me," he said. "The American people do not want to see our nation move toward an oligarchy, where billionaires control the political process."

History suggests that third-party candidates have no hope.

The last third-party candidate to win even a single state was George Wallace, the avowedly segregationist former governor of Alabama. He won five former Confederate states in 1968 with a populist campaign infused with inflammatory rhetoric.

"I was killing fascists when you punks were in diapers," he told one group of protesters, and claimed that white liberals had built a bridge across the Potomac so they could flee majority-black Washington, D.C., for the safety of Virginia.

Still nearly 10 million Americans voted for Mr. Wallace, about 13.5 per cent of the national vote, although his support was mostly concentrated in Alabama, Arkansas, Georgia, Louisiana and Mississippi.

Although fringe third-party candidates abound – Ralph Nader ran in 1996, 2000, 2004 and 2008 – the only other third-party candidate since the Second World War, aside from Mr. Wallace, to collect more than 10 per cent of the popular vote was Ross Perot, another billionaire.

Mr. Perot, a former IBM salesman and canny investor who made a fortune in the first digital revolution, backing Apple's Steve Jobs among others, vowed to balance the federal budget and enable direct democracy via electronic town halls.

He led both the Republican incumbent, George H. W. Bush, and Arkansas governor Bill Clinton, the Democratic nominee, in polls during the summer of 1992. Then, amid campaign infighting and disarray, he quit, only to jump back into the race five weeks before voting day. Despite his campaign's chaos, nearly 20 million voters, or 19 per cent of the vote, backed Mr. Perot. But he failed to win a single state.

Some Republicans still believe that his candidacy delivered the election to Mr. Clinton, denying Mr. Bush a second term. But exit polls show that Mr. Perot drew equally from disaffected Republicans and Democrats. He ran again – and even less successfully – as an independent in 1996.

Welcome to the political circus of the Iowa caucuses
Subscriber content
January 26, 2016 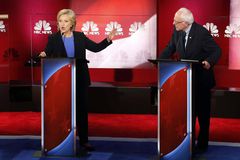