Yet another outbreak of violent skirmishes erupted this week as Socialist lawmakers in Greece brought in new austerity measures in the hope of stanching the budget deficit that has been bankrupting the country and threatening the fragile global economy. In his new book, Michael Lewis chronicles the epic mismanagement and ubiquitous corruption that caused this mess.

As it turned out, what the Greeks wanted to do, once the lights went out and they were alone in the dark with a pile of borrowed money, was turn their government into a piñata stuffed with fantastic sums and give as many citizens as possible a whack at it.

In just the past 12 years the wage bill of the Greek public sector has doubled, in real terms – and that number doesn't take into account the bribes collected by public officials.

The average government job pays almost three times the average private-sector job. The national railroad has annual revenues of 100 million euros against an annual wage bill of 400 million, plus 300 million euros in other expenses. The average state railroad employee earns 65,000 euros a year.

Twenty years ago, a successful businessman turned minister of finance named Stefanos Manos pointed out that it would be cheaper to put all Greece's rail passengers into taxicabs: It's still true. "We have a railroad company which is bankrupt beyond comprehension," Manos put it to me. "And yet there isn't a single private company in Greece with that kind of average pay."

The Greek public-school system is the site of breathtaking inefficiency: One of the lowest-ranked systems in Europe, it nonetheless employs four times as many teachers per pupil as the highest-ranked, Finland's. Greeks who send their children to public schools simply assume that they will need to hire private tutors.

The retirement age for Greek jobs classified as "arduous" is as early as 55 for men and 50 for women. As this is also the moment when the state begins to shovel out generous pensions, more than 600 Greek professions somehow managed to get themselves classified as arduous: hairdressers, radio announcers, waiters, musicians and on and on and on.

The Greek public health-care system spends far more on supplies than the European average – and it is not uncommon, several Greeks tell me, to see nurses and doctors leaving the job with their arms filled with paper towels and diapers and whatever else they can plunder from the supply closets.

Where waste ends and theft begins almost doesn't matter; the one masks and thus enables the other. It's simply assumed, for instance, that anyone who is working for the government is meant to be bribed. People who go to public health clinics assume they will need to bribe doctors to actually take care of them. Government ministers who have spent their lives in public service emerge from office able to afford mansions and two or three country homes.

Oddly enough, the financiers in Greece remain more or less beyond reproach. Virtually alone among Europe's bankers, they did not buy U.S. subprime-backed bonds, or leverage themselves to the hilt, or pay themselves huge sums of money. The biggest problem the banks had was that they had lent roughly 30 billion euros to the Greek government – where it was stolen or squandered. In Greece the banks didn't sink the country. The country sank the banks.

The morning after I landed I walked over to see the Greek minister of finance, George Papaconstantinou, whose job it is to sort out this fantastic mess. Athens somehow manages to be bright white and grubby at the same time.

At the dark and narrow entrance to the Ministry of Finance, a small crowd of security guards screen you as you enter – then don't bother to check and see why you set off the metal detector. In the minister's antechamber, six women, all on their feet, arrange his schedule. They seem frantic and harried and overworked … and yet he still runs late. The place generally seems as if even its better days weren't so great. The furniture is worn, the floor linoleum.

Minister Papaconstantinou ("It's okay to just call me George") attended NYU and the London School of Economics in the 1980s, then spent 10 years working in Paris for the Organization for Economic Co-operation and Development.

He's open, friendly, fresh-faced, and clean-shaven, and like many people at the top of the new Greek government, he comes across less as Greek than as Anglo – almost American.

When Papaconstantinou arrived here, in October, 2009, the Greek government had estimated its 2009 budget deficit at 3.7 per cent. Two weeks later, that number was revised upward, to 12.5 per cent, and actually turned out to be nearly 14 per cent. He was the man whose job it had been to figure out and explain to the world why. "The second day on the job, I had to call a meeting to look at the budget," he says.

"I gathered everyone from the general accounting office, and we started, like, this discovery process." Each day, they discovered some incredible omission. A pension debt of a billion dollars every year somehow remained off the books, even though the government paid it; the hole in the pension plan for the self-employed was not the 300 million euros they had assumed but 1.1 billion euros; and so on. "At the end of each day I would say, 'Okay, guys, is this all?' And they would say, 'Yeah.' The next morning there would be this little hand rising in the back of the room: 'Actually, Minister, there's this other one-hundred-to-two-hundred-million-euro gap.'"

This went on for a week. Among other things turned up were a great number of off-the-books phony job-creation programs. "The Ministry of Agriculture had created an off-the-books unit employing 270 people to digitize the photographs of Greek public lands," he tells me. "The trouble was that none of the 270 people had any experience with digital photography. The actual professions of these people were, like, hairdressers."

By the final day of discovery, after the last little hand had gone up in the back of the room, a projected deficit of roughly seven billion euros was actually more than 30 billion. The natural question – How is this possible? – is easily answered: Until that moment, no one had bothered to count it all up.

"We had no Congressional Budget Office," explains the finance minister. "There was no independent statistical service."

The party in power simply gins up whatever numbers it likes, for its own purposes.

Once the finance minister had the number, he went off to his meetings with ministers of finance from all the European countries. "When I told them the number, there were gasps," he said. "How could this happen? I was like, You guys should have picked up that the number wasn't right. But the problem was I sat behind a sign that said Greece, not a sign that said the new Greek government." After the meeting the Dutch guy said, "George, we know it's not your fault, but shouldn't someone go to jail?"

As he finishes his story, the finance minister stresses that this isn't a simple matter of the government lying about its expenditures.

"In 2009, tax collection disintegrated, because it was an election year."

"The first thing a government does in an election year is to pull the tax collectors off the streets."

This excerpt from Boomerang: Travels in the New Third World, by Michael Lewis is reproduced with permission from Norton.

'Fear of the unknown' strikes at heart of crippled Greece
May 3, 2018 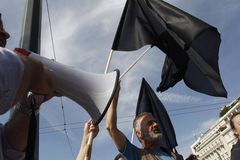