To his extended family in Canada and Afghanistan, the smiling toddler in the hospital ward is the "miracle child."

Two-year-old Abuzar Ahmad somehow survived the terrorist attack last month on a Kabul hotel that killed his parents, brother and sister. That he appears to be recovering from his wounds and now smiles during visits give hope to the relatives who cluster at his bedside.

"If and when Abuzar comes to Canada, we will make sure he never feels alone," Bashir Mirzad, one of the boy's uncles, said. "To us, he is the miracle child."

Mr. Mirzad rushed to Kabul from his home in Whitby, Ont., when he learned of the attack. His brother, Sardar Ahmad, a well-known Agence France-Presse reporter in Kabul, was in the restaurant of the Serena Hotel with his wife and three children when Taliban gunmen opened fire. Mr. Ahmad, his wife and two of the children were among the nine people killed. Abuzar, hit by bullet fragments, was transported to the Emergency Surgical Centre for War Victims and taken directly into surgery.

"When I first heard the news, I thought it was the end of the world," Mr. Mirzad said. "But now, when I see Abuzar's face, I see Sardar's face. It gives me the courage to move on."

Initially, the prognosis for the child was grim. He suffered one bullet fragment wound to his head and injuries to his chest, arm and left leg, where stray bullets sheared off swaths of skin. He underwent three operations, including one for an open skull fracture, and he is being monitored for any neurological damage.

After his first surgery he slipped into a coma for three days. But since then, his condition has improved dramatically. As soon as the femur fracture in his left leg heals, his doctors say he can be discharged.

Abuzar is full of mirth for the family members who come to visit him, but looks askance at strangers at his bedside. Many Afghans, who considered his father an institution in Kabul, have tried to come and see him. Some managed to slip into the ward to kiss him or take pictures, frightening the convalescing child.

This, Mr. Mirzad said, is part of the reason the family is keen to get Abuzar to Canada. The family is discussing with Canadian authorities the possibility of bringing Abuzar to Canada where he can receive the physiotherapy and psychiatric treatment he may need.

Husna Khaliqi, Abuzar's maternal aunt, said the family is relieved at his swift recovery, but worries about what comes after. The boy often asks about his father and mother, she said. The relatives at his bedside have so far told the child that they are travelling abroad, and will be back soon. Ms. Khaliqi is not sure how long they can maintain the fiction, and she stressed the need for psychiatric help.

"It is very important now for Abuzar to return to normal life," Reinhold Perkmann, the boy's doctor, said. "Though I cannot imagine what normal will be for him, now that his mother, father, sister and brother are all dead."

As he spoke, Dr. Perkmann's radio crackled to life. He was expected at the operating table, where another boy wounded in a mine explosion awaited surgery.

"It's the daily routine of Afghanistan," said Emanuele Nannini, the hospital program co-ordinator, referring to the 21 children who were also at the hospital for various war-related injuries. In the week Abuzar was admitted, there were four other children with bullet wounds to their heads, Dr. Nannini said. In Abuzar's ward alone, there are two other children who also lost their entire families in the ongoing violence in Afghanistan. 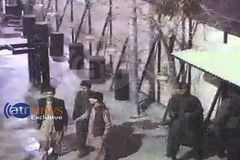