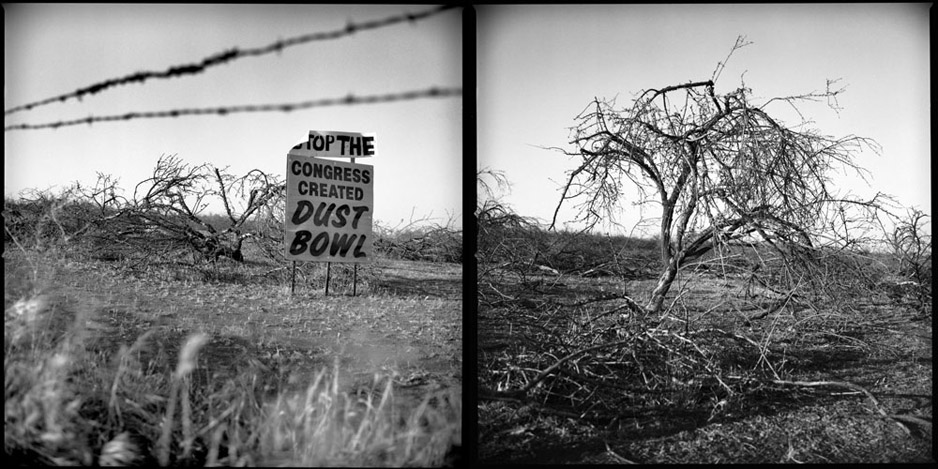 An angry farmer hurt by the recent drought has erected protest signs in his dead orchard near Fresno, Calif. The drought will cost billions in agriculture loses for the state, which is the country's largest producer of fruit and vegetables. (John Lehmann/The Globe and Mail)

More dire by the day

Stark images of cracked earth and fallow fields tell the story of the worst drought in California history. Reporter Andrea Woo and photojournalist John Lehmann travelled to East Porterville, Calif., where residents have made dramatic changes to their lives

More than a year after the family well ran dry, Beto Orozco has learned by necessity how to conserve water at the ramshackle one-storey house he shares with 13 others.

When the taps first went dry, the former janitor would drive to a nearby cemetery, which is connected to a municipal water source, and bathe under the timed spray of the sprinklers. But more often, on days when it is warm enough, he takes a small quantity of his county-supplied non-potable water and washes himself by a tree in his front yard.

“I shower by the tree,” the 53-year-old says in a thick Spanish accent, “so the tree can drink the water.”

Mr. Orozco’s rural community of East Porterville, located about 120 kilometres southeast of Fresno, in Tulare County, Calif., is among the hardest hit by the state’s extreme drought, now in its fourth year. The situation has become so dire that Governor Jerry Brown in April imposed the first-ever mandatory statewide water restrictions, requiring urban water agencies to reduce water usage by 25 per cent or face hefty fines.

It adds teeth to a January, 2014, declaration of a drought state of emergency that called on – but did not mandate – Californians to reduce water usage by 20 per cent.

Under the new order, more than 4.6 square kilometres of lawns throughout the state will be replaced with drought-tolerant landscaping, and new homes and developments are prohibited from irrigating with potable water unless water-efficient drip systems are used. Campuses, golf courses and cemeteries – such as the one Mr. Orozco bathed in – are required to make significant cuts in water use.

While affluent communities such as Beverly Hills have been slow to turn off the taps, hard-hit areas such as East Porterville – an unincorporated community that is not connected to a municipal water system – have no choice. There, hundreds of private wells have been dry for more than a year. Parched lawns have long gone brown and the passing of each car sends a plume of dust into the air.

As dramatic images of cracked earth and uncultivated fields continue to dominate coverage of the worst drought in California’s recorded history, people such as those in East Porterville – who have had to make stark changes to their daily habits – quietly endure, waiting for rain.

Not far from Mr. Orozco lives Donna Johnson, a chatty grandmother with a hearty laugh and a fondness for big, dangly earrings. In a past life, the 73-year-old worked as an alcoholism counsellor; today, she’s known locally as a hero for her tireless efforts to ensure East Porterville residents have access to water.

In fact, had it not been for Ms. Johnson, the extent of East Porterville’s plight might never have been made public. When Ms. Johnson’s well went dry last year, she went around the neighbourhood asking its mostly Spanish-speaking, Mexican immigrant residents if they had water. To her surprise, the answer was usually no.

“It wasn’t until I started making a list that I realized some people haven’t had water in three or four years,” she said. “They just got used to not having water in their wells. Nobody was saying anything.”

Ms. Johnson took it upon herself to solicit donations to buy gallons of water and other supplies, such as paper plates and disposable cutlery, for neighbours. She is often found door-knocking, delivering those supplies and helping residents fill up large tanks with non-potable water at the local fire hall.

On a recent day when the temperature soared past 30, she visited Manuel Dominguez, a good-humoured 86-year-old who lives alone. Among the clutter in his modest, one-storey home are stacks of books, newspapers, medicines. A gentle breeze flows through the screen doors and tickles the yellowed drapes; an Elvis clock swings its hips.

A former carpenter, electrician and construction worker whose tools still hang neatly outside his home, Mr. Dominguez often tinkers with the well in his backyard that went dry more than a year earlier.

“It breaks my heart,” Ms. Johnson said later. “I keep telling him, ‘Mr. Dominguez, the water’s not coming back.’”

It wasn’t until I started making a list that I realized some people haven’t had water in three or four years. They just got used to not having water in their wells. Nobody was saying anything.
Donna Johnson, 73 who works tirelessly to try and ensure residents have access to water

When Mr. Dominguez’s well first went dry, his girlfriend, Gloria Acosta, used to fill a plastic jug with a few gallons of water and bring it to him. She says she had to stop when a neighbour saw and reported her. The city warned her she would be fined $500 for wasting water if she continued.

“[The neighbour] went down to the city [to complain],” Ms. Acosta told Ms. Johnson during a recent visit to Mr. Dominguez’s home. She shook her head in disbelief. “That’s why my cousin, she told me I could go get [water] from them [instead] because they don’t have nosy neighbours.”

Ms. Johnson rolls her eyes, but isn’t surprised. She offers her own story about a local resident calling Children’s Protective Services on a girl who went door to door “begging for water.”

“CPS came out and said, ‘What can we do to help you?’ They didn’t do anything to her,” she recalled. “They said they don’t take them away unless there’s something worse. But I just think that’s awful. You either see the best of people or the worst of people in this.”

A couple of kilometres away, Angelica Gallegos lives in a double-wide trailer with her husband, two children and two dogs. For her, the drought means washing dishes in a large bowl, saving that water to mop the floors and saving that water still for plants and trees. She will use only Dawn brand dish detergent because she says it requires less water to rinse off.

For showers, Ms. Gallegos, a packing-plant supervisor, has resorted to driving some 11 kilometres to the closest gym. A shower at home is five minutes tops, cold and usually with one of her children. Flushing the toilet requires a bucket.

“You get frustrated, coming home from work and then having to go to the fire station to load up some barrels [of water].” 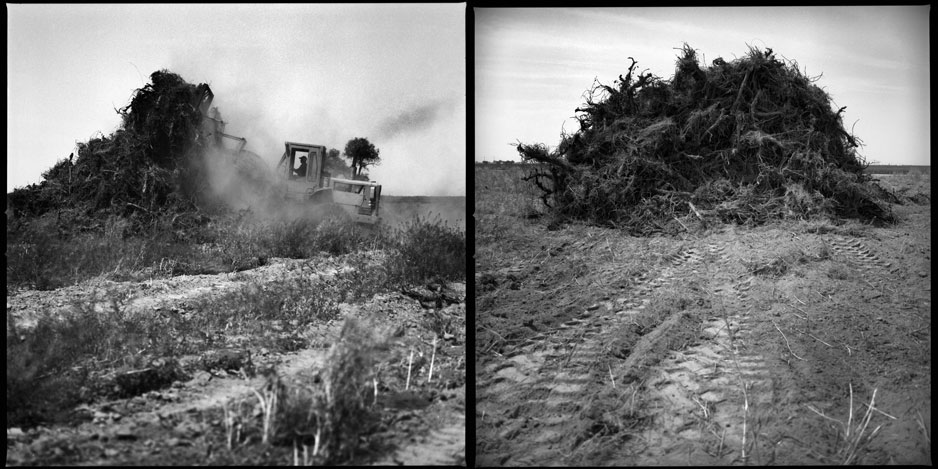 A front end loader chews through rows of dead grape vines in Fresno, California April 3, 2015. Matthew Efird a fifth generation farmer made the painful decision to rip up his grape vines to save water for the more valuable almond orchard. (John Lehmann/The Globe and Mail)

As of the first week of May, Tulare County had received 1,188 reports of domestic well failures, most of which are in East Porterville. As a temporary fix, the county is delivering both bottled drinking water and non-potable water to residents in need, with 739 households approved under its Bottled Drinking Water Program so far.

Of 43 county-provided 2,500-gallon tanks for non-potable water, 33 are designated for East Porterville and 10 for West Porterville. Non-profit organizations have also provided residents with a number of 275-gallon tanks.

(Mr. Orozco, who has to refill his 275-gallon tank at the local fire hall four times a week to provide for his household of 14, remains on a waiting list for a larger tank. He expressed frustration at seeing neighbours receive theirs.)

Trailers with a total of 16 portable showers, on loan from the U.S. Forest Service, have been set up in the parking lot of an East Porterville church. They will remain there until at least October, at which time the county will re-evaluate the community’s need. There are also outdoor sinks for teeth-brushing and shaving.

Partnering with a non-profit organization called FoodLink, the county has also distributed to residents in need 129,940 drought-related food relief packages, which contain non-perishable foods such as rice, beans, soup and canned vegetables.

At least 276 people have been laid off or have had their work hours reduced due to drought, according to the county’s Workforce Investment Board.