International sanctions on Iran are having "significant" effects on the Iranian people and also appear to be harming humanitarian operations in the country, UN chief Ban Ki-moon said in a report to the UN General Assembly released on Friday.

The Iranian currency has fallen during the past year and over the last ten days alone has lost a third of its value, sparking street protests. U.S. official and other Western officials blame the drop on a combination of economic mismanagement and sanctions.

Iran is under UN, U.S. and European Union sanctions for refusing to halt nuclear enrichment, which Western powers and their allies fear is part of a plan to amass the capability to produce nuclear weapons. Tehran denies the charge, saying its atomic work is for medicine and generating electricity.

"The sanctions imposed on the Islamic Republic of Iran have had significant effects on the general population, including an escalation in inflation, a rise in commodities and energy costs, an increase in the rate of unemployment and a shortage of necessary items, including medicine," Mr. Ban said in the report.

Iran has been hit with four rounds of UN Security Council sanctions between 2006 and 2010 for refusing to halt its nuclear enrichment program. Western nations originally said the sanctions would hurt the government and not the people of Iran, but now acknowledge the wider impact.

The European Union has started discussing the possibility of a broad trade embargo against Iran, moving beyond the web of energy, business and financial restrictions imposed so far. But some states fear aggressive moves could backfire and rally the people behind Iran's leaders.

Key lawmakers in the U.S. Congress are looking at ways to expand economic sanctions on Iran, measures that have helped pushed the country's currency into free fall but have not yet pressured Tehran to abandon its nuclear program.

The proposals, still in the early stages of development, would aim to penalize foreign banks that handle any significant transactions with the Central Bank of Iran. Only oil-related transactions are now covered.

Britain, France and Germany have called for more EU sanctions, but there are unlikely be further UN sanctions because of resistance from Russia and China. Moscow has repeatedly criticized unilateral U.S. and EU sanctions against Tehran.

Russia and China have reluctantly supported all four rounds of UN sanctions against Iran over its nuclear program but worked hard to weaken the measures in negotiations on the Security Council resolutions before their adoption.

"The sanctions also appear to be affecting humanitarian operations in the country," Mr. Ban wrote in the report, dated Aug. 22, to the 193-member General Assembly on the "Situation of human rights in the Islamic Republic of Iran."

"Even companies that have obtained the requisite license to import food and medicine are facing difficulties in finding third-country banks to process the transactions," he said.

Mr. Ban said due to the payment problems some medical companies have stopped exporting medicine to Iran, leading to a reported shortage of drugs used to treat various illnesses, including cancer, heart and respiratory conditions and multiple sclerosis.

Mr. Ban said a number or Iranian aid groups and activists had expressed concern about inflation, rising commodity prices and the sanctions compounding each other to have "far-reaching effects on the general population."

For nearly 10 years, various major powers have negotiated unsuccessfully with Iran to persuade it to halt its nuclear program in exchange for political and economic incentives. Since 2006, the United States, Britain, France, Germany, Russia and China have led the so-called "P5-plus-one" talks with Tehran.

U.S. Secretary of State Hillary Clinton held out the possibility on Wednesday that sanctions on Iran could be eased quickly if Tehran worked with major powers to address questions about its nuclear program.

Western diplomats said Iran continually offers proposals about how it could end the nuclear stand-off with the West, but they are not bringing them to the six-power group - the five permanent Security Council members and Germany - and do not appear to be sincere about resolving the crisis.

"The Iranians float all sorts of proposals outside the framework (of the six-power group) but nothing serious," a senior Western diplomat said on condition of anonymity.

Another Western diplomat said that Iranian proposals always involve the removal of sanctions before they would suspend sensitive nuclear activities, which he said was unacceptable.

Last week Israeli Prime Minister Benjamin Netanyahu drew his "red line" for Iran's nuclear program, saying Tehran may be on the brink of an atom bomb in less than a year and suggesting that Israel might have to make a decision on whether to use military force against Iranian nuclear sites by spring 2013. 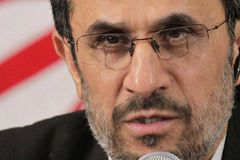