As the death count in Nepal marched grimly upward Sunday, family and friends of hikers travelling in the earthquake-struck country faced a frustrating lack of communication and called on the Canadian government to do everything in its power to rescue its citizens.

The devastating earthquake, and a series of powerful aftershocks, have wrecked roads and severed communications to many of the remote areas frequented by trekkers. For those back home, it's made for tense hours of watching news and scanning social media in hopes of gleaning any information about their loved ones.

No Canadians were climbing Mount Everest at the time of the avalanche, according to information compiled by the Alpine Club of Canada. But "there were several at base camp," said Raz Peel, who heads the club in Vancouver.

But many other Canadians were in other areas of the country.

Among those is Faye Kennedy, a 32-year-old civil servant from Ottawa who was hiking in Langtang National Park, some 65 kilometres north of Kathmandu, with a friend and a local Sherpa. Their plan was to hike through Langtang before flying to Tibet; the family expected to hear back from them on May 1 or 2.

But the devastating earthquake, which has killed at least 2,400 and injured thousands, has created a sudden new worry for her family, and its inability to reach her.

"We're anxious to hear from her and we know it could be a long wait," said Justin Piche, a University of Ottawa professor who is Ms. Kennedy's brother-in-law.

Ms. Kennedy is an avid trekker who has hiked the 49 peaks of the Adirondacks and grunted her way up to Everest Base Camp on a previous trip. But she had planned to hike between tea houses, so "she does not have a tent. One of our worries is that she doesn't have access to proper shelter," said Mr. Piche.

"We really encourage Canadians to donate to rescue and aid efforts in Nepal now," he said. He also called on Ottawa to "mobilize the necessary resources to track Faye and others down and ensure their safe return to Canada."

Canada announced Saturday that it is deploying an assessment team from its military DART disaster assistance unit to determine how it might be of help to Nepal.

The anxiety was shared by Nepalese, too, some of whom had trouble returning home. On Sunday, 29-year-old Sujit Thapa, who works as an accountant for Honda in Japan, boarded a plane from Kunming, China to Kathmandu. But half an hour before landing, the airport was closed and the plane was turned around. Air crew said the tarmac in Kathmandu was too full to support more planes.

"I'm really frustrated and tense," he said from a boarding lounge in Kunming, as he waited to try again. "I'm dying to meet my family."

His family lives in a Bhaktabur, a small village outside Kathmandu. His relatives were all spared serious harm, but virtually every brick-built house in the village was demolished. Concrete structures that remained standing "but they are all cracked. So it's quite scary to get inside the house," he said.

For him and for many others, this earthquake was expected. Mr. Thapa's grandparents lived through a devastating 1934 earthquake that killed at least 8,500. "When I was a kid she used to talk about it — it was so scary. The whole town was covered by dust that came up like smog," he said.

Those stories had always served as a warning that this could happen again.

"I was always scared, because you know this kind of thing happens in Nepal," he said. But he blamed the government for being "blindfolded," and not properly writing and enforcing building codes that could have limited loss of life.

Powerful aftershocks continued to convulse Nepal on Sunday, sending residents of Kathmandu screaming into the streets again and again as a growing sense of despair spread through a devastated capital lacking water, food and electricity. 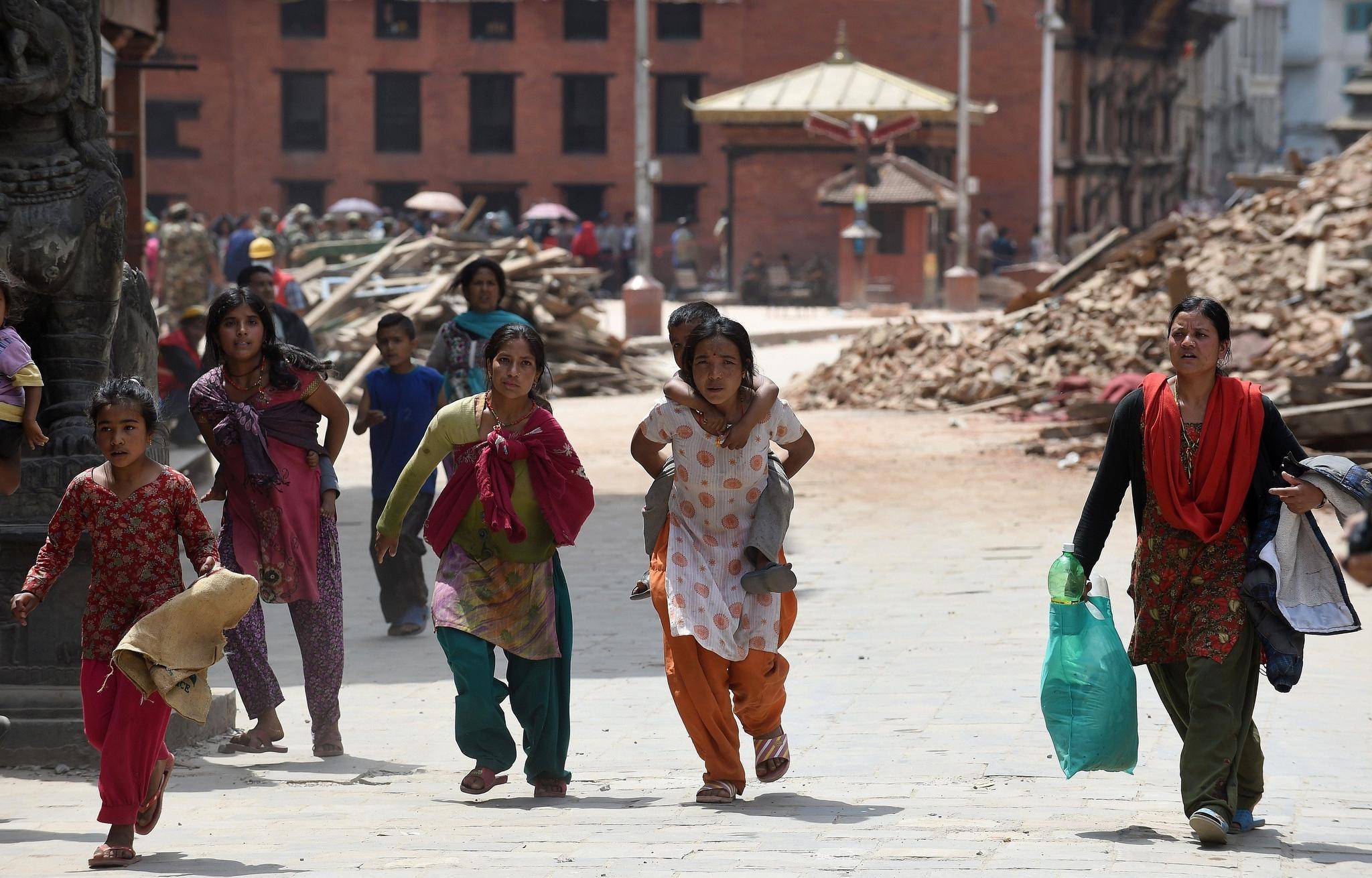 A day after an earthquake killed more than 2,400 people and injured about 5,900, residents grew frantic. The Nepali government, overwhelmed by the enormity of the challenge facing the country, struggled to provide relief, or much hope.

Streets in parts of this city of about 1.2 million were impassable after tens of thousands of people took up residence there. It was a strategy endorsed by the government.

Prime Minister Sushil Koirala, who was attending a conference in Indonesia when the quake struck, had rushed back to Kathmandu and was to speak in a televised address Sunday. But the speech was delayed, as have relief efforts, by strong tremors that continue to rock the country. 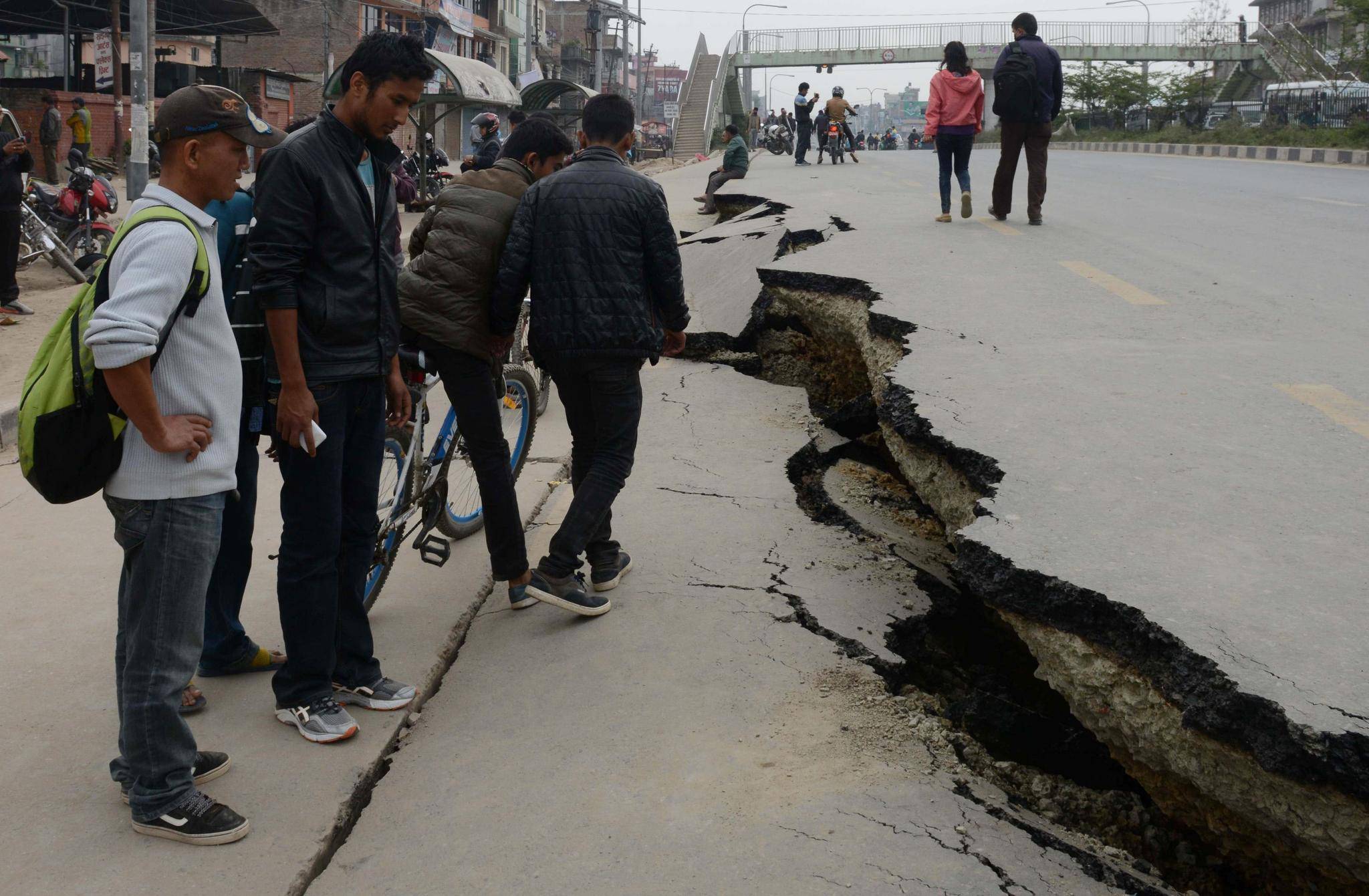 It is increasingly evident that Nepali authorities were ill-equipped to rescue those trapped and would have trouble maintaining adequate supplies of water, electricity and food.

"In my neighborhood, the police are conspicuous by their absence," said Sridhar Khatri of the South Asia Center for Policy Studies in Kathmandu. "There is not even a show of force to deter vandalism, which some reports say is on the rise."

On Sunday, the government began setting up 16 relief stations across Kathmandu and the rest of the country while rescue operations continued.

The Home Ministry said Sunday that more than 2,400 had been confirmed dead and more than 5,900 injured. 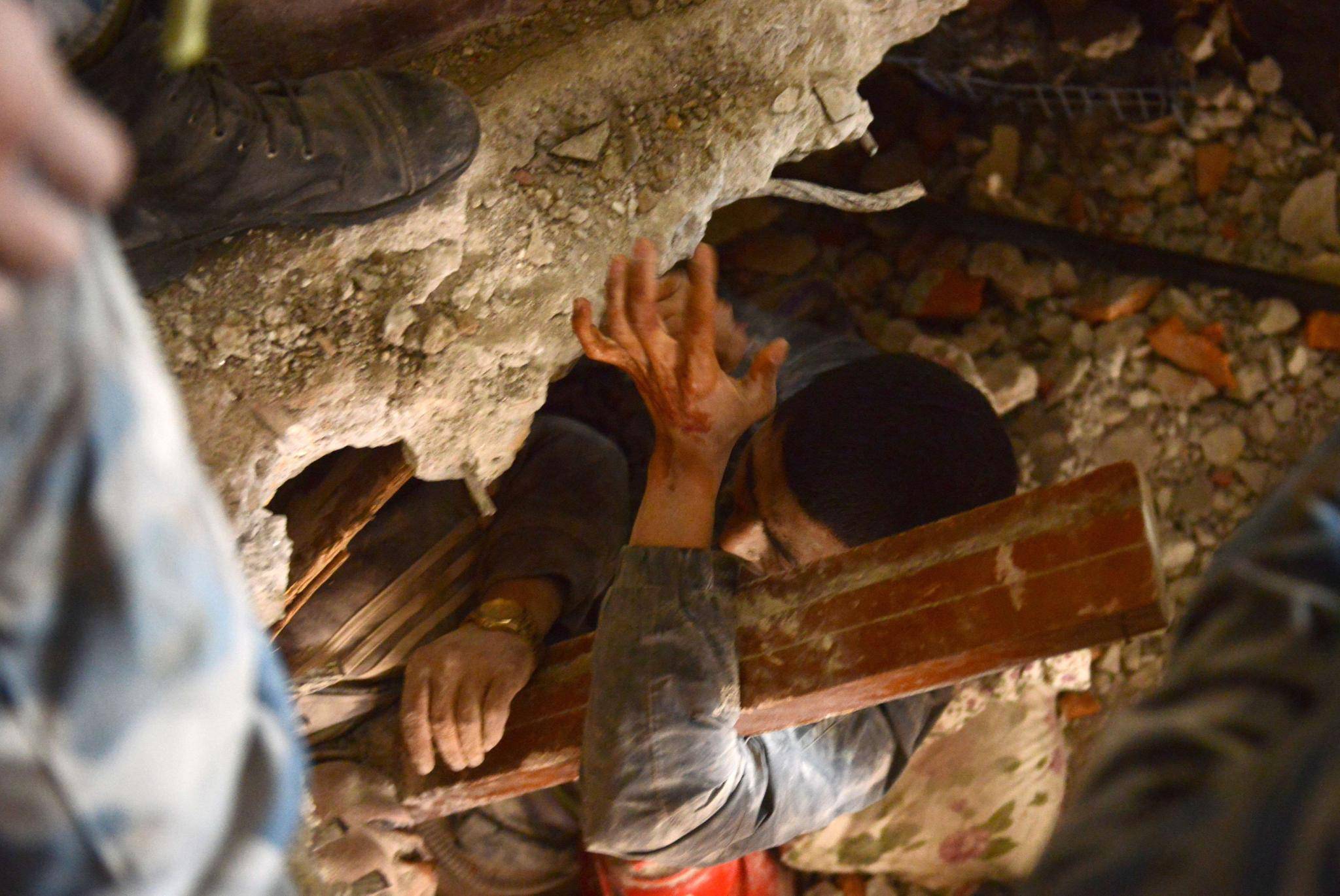 Thousands of Kathmandu's residents squatted on streets throughout the city either because their homes were destroyed or because continued aftershocks, including one of magnitude 6.7, left them too afraid to go inside. Other residents camped out in schools, school playgrounds and government offices.

With a report from the New York Times