In the rugged Rif mountains, Abdelkhalek Benabdallah strode among towering marijuana plants, checking the buds for the telltale spots of white that indicate they are ready for harvest.

Much of the crop had been picked and left to dry on the roofs of stone-and-wood huts that dot the valley, the heart Morocco's pot-growing region. Benabdallah says he openly grows the crop, while understanding the risk: "We are regularly subject to blackmail by the gendarmes," he said as he scythed through stalks and wrapped them into a bundle.

Morocco's marijuana farmers live in a strange limbo in which the brilliant green fields are left alone, while the growers themselves face constant police harassment. A new draft law may bring some reprieve: It aims to legalize marijuana growing for medical and industrial uses, a radical idea for a Muslim nation. It could alleviate poverty and social unrest, but the proposal faces stiff opposition in this conservative country, as well as the suspicions of farmers themselves, who think politicians can do nothing help them.

Morocco is joining many other countries in the world, as well as some U.S. states, in re-examining drug policies and looking to some degree of legalization. Morocco's situation is unusual, however, in that Islamic traditions create deep taboos against drugs, despite the centuries-old tradition of growing marijuana in the north.

There are some 80,000 families in the northern Rif mountains of Morocco who make their living from growing pot, according to U.N. estimates; the region supplies nearly all of Europe's hashish and is the world's top supplier along with Afghanistan. The World Customs Authority reported that in 2013, 65 per cent of hashish seized at customs worldwide came from Morocco. Estimates vary wildly for how much the business is worth but legalization would certainly provide a substantial boost to farmers and to Morocco's anemic economy, which is forecast to grow by just 2.5 per cent this year.

For now, the profits go to the buyers and smugglers who pay the farmers little for their crop and reap huge profits in Europe — where consumption in places like Amsterdam's famed coffee shops has been decriminalized. The trade has brought little wealth to the region, with farmers saying a kilogram of kif, as the plant is known locally, sells for $8 and they make an average of just $3,000 to $4,000 a year.

They say they are completely neglected by the state — except for its police force.

Growers say that neighbours with scores to settle file anonymous complaints with authorities resulting in a visit from the paramilitary gendarmes, confiscation of the crop and months or years in prison — unless a bribe can be paid. Nourredine Mediane, a lawmaker from the region, said some 15,000 people from the area are currently in detention and another 30,000 are wanted by authorities.

Clutching his wide-brimmed straw hat, one deeply lined farmer described how he learned he was wanted by police when he went to renew his national ID card in a nearby town. Since then, he has not left his mountainside village and relies on family members to pick up supplies.

"I am scared to even go to the doctor," he said, asking that his name not be used for fear of arrest. "I don't even have the national identity card and I'm stuck in the village."

Despite fear of arrest, many locals have no choice but to grow pot. The valley's rocky soil is poor and the only crop that seems to thrive is marijuana, which was legal to grow under royal mandate in certain regions of the Rif until 1974, when the government passed a blanket ban on the cultivation and consumption of all drugs.

The marijuana ban was passed just as European visitors to the marijuana growing regions taught the farmers to produce hashish for export to feed rising demand across the Mediterranean. The ban also brought Morocco in line with the 1961 UN convention against drugs it had signed.

The security-centred approach to the problem has failed, argued Mehdi Bensaid, a lawmaker with the opposition Party of Authenticity and Modernity that was founded by a close associate of the king. The party's draft law would keep pot consumption — widespread among young Moroccans in parts of the country — illegal, but legalize production.

Under the legislation, the entire crop would go to a state agency that would use it to produce new cannabis-based medications that have been developed to aid cancer and multiple sclerosis patients, and eventually for industrial uses such as textiles, paper and fiberboard as well. Under the U.N. drug conventions, marijuana can be legally be grown for industrial and medical uses. Factories would be set up in the region to process the plant and provide jobs. The state-driven industry would prevent cannabis from being turned into hash and going to the smugglers.

Bensaid added that he has already been contacted by European and American pharmaceutical companies interested in investing in the venture if the law passes. It is not clear, however, if there is sufficient demand for medical purposes to meet the vast supply coming from Morocco's fields. And U.N. conventions would prevent the state-sanctioned crop to be sold abroad for recreational purposes.

"If Morocco has a crop that could produce these medicines that could be sold today in the U.S., Canada and France, it is an employment opportunity for citizens living in a miserable situation," Bensaid told The Associated Press. "It's a win-win, for the state, because there is tax, for the citizens, because they are in an illegal situation, and for the sick, who get their medicine."

Bensaid's party is backed in its effort by Morocco's oldest political party, the Istiqlal or Independence Party. The two have presented a draft law to both the upper and lower houses of parliament. It is unclear, however, if the draft is on the schedule to be debated when parliament re-opens this month.

The laws have received some high-profile backing, including the ministers of health and higher education, who have supported the idea of using marijuana for scientific research.

However, the Islamist-led government and the powerful palace have remained silent, with few wanting to break a deep-rooted taboo against illegal drugs. While not specifically banned in Islam, marijuana's effects are likened by most imams to alcohol, which is banned by the religion.

Mustapha Khalfi, Morocco's government spokesman and communications minister, refused to discuss the draft law, pointing only to government efforts to combat drug smuggling and reduce the amount of land under cultivation.

Members of the Islamist Party for Justice and Development have accused those behind the law of merely looking to boost their standing in the Rif Valley region ahead of key local elections next year.

"These people are not just trying to get votes from the poor peasants in these regions, but are also looking for the sympathy and money from the drug barons ahead of the 2015 elections," said Abdelaziz Aftati, a leading member of the Islamist party.

The growers themselves express suspicion about the plans concocted by politicians in Rabat. Farmers worry that legalization would mean a fall in the already low price for their crop and competition from wealthy estates with vast acreage and the latest agricultural technology.

"If legalization happened for all of Morocco, we could never compete with the other farmers that have lots of land and the price of cannabis wouldn't be any different than that of carrots — we'd make nothing," said local activist Mohammed Benabdallah.

More than any other region in Morocco, the wild Rif mountains have seen little government investment, in no small part due to a history of rebellions and the marijuana cultivation itself.

The locals are mostly Berbers, North Africa's original inhabitants, rather than Arabs. In the 1920s, the region threw off Spanish rule and declared an independent republic that was subdued only after years of attacks by French and Spanish soldiers.

The Rif revolted again in 1958, soon after Morocco's independence. In the aftermath, it was left poor and undeveloped with bad roads and few schools and hospitals. Locals say the police don't dare to destroy all the marijuana fields for fear of provoking another uprising.

So instead, the economy remains firmly anchored to marijuana. Every year with the approach of the cold autumn months, villagers take their dried bundles of kif, place them over fine mesh and rhythmically beat them with sticks to extract a powder which is then rolled into bricks of hash. Pot is still smoked by the older generation in long-stemmed pipes called "sebsis."

By November, the sheer walls of this valley will resound with the sound of tapping. "It is a like music," said Benabdallah, "a festival of hashish."

The government has repeatedly tried to persuade farmers to grow other crops, but efforts have failed. By 2010, most alternative crop programs had been suspended.

Walking along terraces of rocky earth, 63-year-old Mohammed Fathi said he tried to grow other crops, not least to fend off 32 police complaints against him. He was part of a co-operative that grew olives, figs and almonds, but it failed due to lack of rain — and he turned back to growing pot.

"Marijuana," he said, "resists the drought that kills other plants." 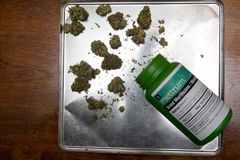 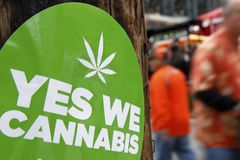