Moving in: The female politicians set to redefine global leadership

Theresa May is set to become British prime minister this week. But her rise to power is only the beginning of a defining year for female politicians around the world. By the end of 2016, she could be joined by the likes of Hillary Clinton and the UN's first female secretary general

There will be a new prime minister at 10 Downing Street as of Wednesday – only the second female leader in the United Kingdom's history.

The swirl of political intrigue in post-Brexit United Kingdom – with Prime Minister David Cameron announcing that he will step down and contenders stepping up only to eventually vanish – witnessed yet another dramatic twist on Monday with word that one of the two Conservative Party candidates for leadership would bow out.

That propels Theresa May into the premiership, and the handover takes place this week.

The last time the country had a female prime minister was in 1979 – the beginning of Margaret Thatcher's 11-year rule.

But the rise of Ms. May is just the beginning of what could be a momentous year as female politicians set to become global power brokers. Here is a look at the powerful company Ms. May is set to join – and others set to make history. 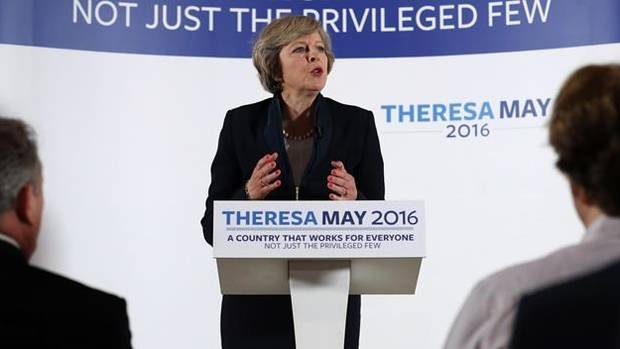 Who is Theresa May? Your introduction to Britain’s new Prime Minister

Hillary Clinton: The race for the White House

The U.S.-U.K. transatlantic alliance – cemented during World War Two by Winston Churchill and Franklin D. Roosevelt – is set to get a 2016 makeover.

Imagine Hillary Clinton and Theresa May holding a joint news conference in the White House Rose Garden, just steps from the Oval Office.

The U.S. general election is still months away and much can change. But the trajectory of the race so far puts Ms. Clinton in a strong position, in large part, because of the Trump campaign's inability to pivot from the state nominating contests to a general election focus.

Donald Trump is languishing behind his rival when it comes national campaign staff, fundraising, TV ads and voter opinion polls.

The U.S. presidential election is about to hit a critical moment.

Each presidential nominee will be looking for a post-convention boost heading in to the Labour Day weekend – and the ensuing sprint to the Nov. 8 vote when voters generally turn their full attention to the race.

As of now, the race is Ms. Clinton's to lose.

If she manages to break the ultimate glass ceiling and win the White House, the "special relationship" – the phrase often used to describe U.S.-U.K. relations – will take on new meaning. The May-Clinton partnership could endure at least until 2020 when both leaders will turn their attentions to general election contests.

Hillary Clinton and Barack Obama at a North Carolina campaign rally earlier in July. It was their first appearance together on the campaign trail in 2016.

In the 70-year history of the United Nations, there has never been a female secretary general.

But that could change by the end of this year. The current term of UN Secretary General Ban Ki-moon is expiring and there is at least one strong female candidate in the mix to become the world's top diplomat.

Ms. Clark, the former prime minister of New Zealand and current head of the United Nations Development Program is one of six female candidates in the running. In total, there are 12 candidates – and Ms. Clark is the front-runner.

When she launched her campaign in April, she held up a T-shirt with the words: "Aunty Helen for UN Secretary General."

There are still hurdles to clear for Ms. Clark.

Her tenure at the UNDP will come under increased scrutiny and her candidacy will face the veto of the five permanent members of the UN Security Council, which includes the U.S., the U.K., China, Russia and France.

If the Council recommends her candidacy, she will have to face the 193-member general assembly.

Her in-tray will be piled high with problems: a stubborn conflict in Syria, curbing the spread of Islamic State, a global refugee crisis and sexual abuse scandals rocking UN peacekeeping.

Still, there is a strong possibility that two of the five permanent members of the UN Security Council will have female leaders and the body created in the postwar period to ensure that conflicts never spiral out of control will be led by a woman.

There are currently female leaders in Norway, Poland and Croatia. But the most powerful European leader – now in her third term as German chancellor – is Angela Merkel.

She leads Europe's largest economy and, since 2005, has virtually been the point person on a series of crisis facing the European Union: the global economic downturn in 2008, negotiating financial aid to Greece and leading the continent's response to an unprecedented influx of refugees. In 2015, 1.1 million people claimed asylum in Germany.

In the latest test for the European project, Ms. Merkel will play a critical role. Negotiations over the U.K.'s exit from the EU will be fraught and the relationship between the new British prime minister and the German chancellor will shape how those talks go.

But the May-Merkel partnership may be short-lived.

German parliamentary elections are expected to take place in 2017.

The Merkel government's handling of the refugee crisis could spell an end to the current coalition that the chancellor leads.

The North America-Europe alliance in 2015. By the end of 2016, three of the five leaders could be be women.

Female leaders: How does Canada rank?

Progressive Conservative Party leader Kim Campbell campaigns in Toronto during a federal election swing through southern Ontario in 1993. The party was decimated on election night.

In 2015, analysis by the Pew Research Forum showed that there were 18 female leaders, or about a tenth of the leadership of countries around the world.

Brazil's Dilma Rousseff could be scratched off that list depending on how a senate trial unfolds. There is an interim president currently leading the country set to host the Summer Olympics.

But the overall picture when it comes to female leaders in the last 50 years is not encouraging, according to data compiled by the World Economic Forum.

Among those countries is Canada.

Kim Campbell was the country's first female prime minister in 1993 and served for just over four months.

Twenty-three countries have had female leaders for more than five years – including countries such as India, the Philippines, Ireland and Argentina.

According to the World Economic Forum, Canada is joined by ten other countries that have had female leadership lasting less than a year during the 1964-2014 period: Austria, Bahamas, Bulgaria, Ecuador, Georgia, Macedonia, Madagascar, Mauritius, Mongolia and Portugal.

MORE FROM THE GLOBE