Nearly three months after a U.S. warplane repeatedly attacked a hospital – immolating patients in their beds and destroying the sprawling Médecins sans frontières facility with sustained heavy gunfire for nearly 30 minutes – the Obama administration is hoping a presidential apology and vague claims that it was all a terrible mistake will defuse calls for an independent international probe into war-crimes allegations.

But neither MSF (Doctors Without Borders) nor leading human-rights organizations such as Human Rights Watch are willing to accept the Pentagon's claim that a series of blunders resulted in the brightly lit and well-marked hospital being destroyed in the otherwise blacked out Afghan city of Kunduz. MSF has delivered a petition bearing more than half-a-million signatures to the White House calling for an international probe, and Human Rights Watch wants senior U.S. officers investigated to determine whether they are criminally accountable.

At least 42 patients and staff were killed in the Oct. 3 attack. Dozens more were seriously wounded, including some who were mowed down as they fled the rapid-firing machine guns on the circling AC-130U Spooky gunship overhead.

"Perpetrators cannot also be judges," Jason Cone, executive director for MSF in the United States, said to a small gathering of demonstrators holding searing images of the attack before delivering the petition.

MSF wants the Obama administration to drop its opposition to an International Humanitarian Fact-Finding Commission investigation because the Bern-based UN entity can't act without the express consent of those being investigated. Perhaps not surprisingly, the commission hasn't investigated a single alleged war crime in its 24-year history, despite claiming that its "main purpose is to investigate allegations of grave breaches and serious violations of international humanitarian law."

Mr. Cone said the President could underscore the need for all warring countries – not just the United States – to respect the Geneva Conventions, which among other things make it a war crime to attack a hospital, by agreeing to an IHFFC probe.

"There is the principle of consenting to independent scrutiny," Mr. Cone said, adding: "Establishing the facts is also incredibly important, and examining those facts through the lens of international humanitarian law rather than simply whether they adhered to U.S. military procedure."

Days after the attack, which the U.S. military initially justified by claiming the Taliban had taken over the hospital, Mr. Obama called MSF's International President Joanne Liu to offer a brief, but private, apology.

Asked whether he offered any explanation about why the hospital, which was on the U.S. military's protected "no-strike" list, was attacked, Mr. Obama's spokesman Josh Earnest said: "He did not."

Last month, after an internal investigation, General John Campbell, the top U.S. and NATO commander in Afghanistan, blamed "human error," and said a handful of soldiers and airmen who have been suspended from duty might face disciplinary action. "This was a tragic but avoidable accident caused primarily by human error," Gen. Campbell said in a briefing. He outlined a litany of failures, including: computers that didn't work; maps that didn't match; a mission changed part way through; and commanders, both in the air and on the ground, who apparently failed to follow long-established procedures intended to identify and confirm targets.

Gen. Campbell's account seemed to strain credulity: that the heavily armed flying gunship was pounding the hospital with high-explosive cannon shells for 29 minutes by accident, orbiting overhead and firing more than 200 times when no return fire was coming from the supposed Taliban stronghold in a former prison run by Afghanistan's National Security Directorate.

"The U.S. version of events … leaves MSF with more questions than answers," said Christopher Stokes, MSF general director, after Gen. Campbell's account. "It is shocking that an attack can be carried out when U.S. forces have neither eyes on a target nor access to a no-strike list, and have malfunctioning communications systems."

But since Gen. Campbell delivered his conclusions – that it was all a dreadful blunder and some might be held accountable for failing to follow the rules of engagement – a sharply different version of events has emerged suggesting there was an order for the gunship to attack the building and that a cover-up might be under way.

In a letter made public this week, Human Rights Watch Washington director Sarah Margon noted that Duncan Hunter, the senior Republican on the House of Representatives Armed Services Committee, reported he had been told by two U.S. Special Forces soldiers that the attack on the hospital was deliberate and came after the Afghan military identified the building as a Taliban stronghold.

In an earlier letter to Mr. Carter, Mr. Hunter said "inaccurate information and poor intelligence [were] provided by Afghan forces – including information that was both incorrect and unverified by U.S. intelligence and personnel."

That version matches – in at least some respects – the initial U.S. military explanation and is consistent with claims by senior Afghan government officials that the Taliban were firing from the hospital.

"As you know, individuals who commit serious violation of the law of war with criminal intent – that is intentionally or recklessly – are responsible for war crimes," Ms. Margon wrote in the Human Rights Watch letter that calls for senior members of the U.S. chain of command to be investigated.

Mr. Cone said the issues go far beyond whether MSF's hospital in Kunduz was destroyed by mistake or intentionally. He notes that several hospitals have been bombed in several war zones in recent months.

"We're in an environment where we have seen hospitals bombed in Syria, Yemen, Afghanistan; these are really grave breaches of international humanitarian law and we can't accept that the U.S. or, frankly, any of those combatants to be the sole investigators of these attacks."

If the Obama administration were to agree to an IHFFC probe, it would "send a signal both to U.S. allies, as in the case of Saudi Arabia, which is leading the bombing in Yemen" and the four out of five permanent members of the UN Security Council currently bombing in Syria, that the Geneva Conventions must be respected, Mr. Cone said.

Opinion
Finding the facts of the MSF bombing
March 22, 2018 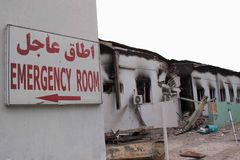