Khin Maung Cho does not much look like the hope of his people. He is a soft-spoken intellectual property lawyer who runs a small practice with his daughter. The one time he ran for election, in 1990, he got trounced. And at 64, he is at the age thoughts turn to retirement.

But in a country that has stripped electoral privileges from hundreds of thousands of Muslims, Mr. Khin Maung Cho may be the best chance Myanmar's third-largest religious group has to place at least one representative in its 664-seat parliament.

"We are supporting only one person to win," said Ko Ko Latt, a local businessman who has poured time and money into getting a Muslim elected this year. "Because the other candidates have no chance."

On Sunday, Myanmar will hold its first openly contested national election in a quarter-century, a poll that stands to hand new power to democracy icon Aung San Suu Kyi.

For a country that has faced more than five decades of military rule, the vote promises a historic stride toward greater democratic freedoms.

For Myanmar's Muslims, it underscores how the country has also moved to restrict liberties for a small subset of the population. Authorities have placed more than 140,000 Muslims in camps, denied citizenship cards to children, passed rules that restrict child-bearing and, this year, barred large numbers of Muslims from either voting or seeking office. The country's largely Muslim Rohingya minority voted in 2010. This year, about 750,000 Rohingya who hold temporary identification documents cannot.

In 2010, four Muslims were elected to parliament. None of those men will be on ballots on Sunday. Neither the military-backed Union Solidarity and Development Party that is currently in power nor Ms. Suu Kyi's National League for Democracy has a single Muslim candidate.

"Both parties are aiming for a Muslim-free parliament," said U Shwe Maung, a Rohingya man who won office in 2010 with the ruling USDP party, but was unable to run again this year after his nomination was rejected by a local election commission. (A small group of Rohingya hold citizenship cards, which means they remain eligible to vote and stand for office.)

Researchers at Yale University Law School recently said there is "strong evidence" the treatment of the Rohingya, who largely live in the country's far western Rakhine state, meets international legal criteria for genocide.

But electoral problems for Myanmar's Muslims extend across the nation. Fewer than 30 of the 6,000 candidates are Muslim, a much smaller representation than in the general population, where the proportion of Muslims is 4 per cent. Even those allowed to campaign fear that, if they win, the authorities could use a post-election scrutiny of expenses to deny them a victory.

"The probability for a Muslim candidate to be elected MP is less than 1 per cent," Mr. Shwe Maung said.

Mr. Khin Maung Cho, the intellectual property lawyer, won the right to run only after a fight that included sending the President Thein Sein and other senior leaders a letter threatening to hold a press conference about his situation. Foreign embassies – including Canada's – also issued a public statement expressing alarm "at the recent rejection of dozens of candidates based on what we deemed to be specious citizenship grounds."

Mr. Khin Maung Cho is running as an independent in Rangoon, a city expected to vote in large numbers for Ms. Suu Kyi. His constituency is two-thirds Muslim – enough, he hopes, to vote him in.

"I would feel very sorry if there was no Muslim in parliament," he said.

Others, like Rohingya businessman U Tun Min, were not allowed to run. He received a letter from election commission officials saying a review of his application found he was not

The officials told him verbally they questioned the citizenship of his late parents. Both his parents and grandparents were citizens; he has copies of some of the documents. His great uncle and uncle were both MPs.

"I have lost dignity," Mr. Tun Min said. "By being Muslim, you are not recognized as a citizen." He fears that, after this election, "there will be no one to speak out for Muslims."

The slim roster of Muslim candidates has coincided with the rise of Ma Ba Tha, a high-profile organization of nationalist monks that has heightened fear of Muslims by calling them terrorists. U Kyaw Sein Win, who manages projects for the group, said the parties are running Muslim-free slates because "if they choose someone Muslim, maybe they believe people won't trust them. This is their choice."

The monks have little sympathy for the Rohingya who also cannot cast ballots. "The Rohingya are guests. Nowhere in history can guests vote where they are not originally from," Mr. Kyaw Sein Win said.

He added: "People who are illegal migrants to this country don't deserve to be called guests. In calling them guests, we are already giving them respect." Some Rohingya families have been in Myanmar for more than a century. Others are more recent arrivals.

U Yan Naing was made chairman of the NLD election committee in his hometown of Myaung Mya. Soon after, members of his own party lined up on a street in front of his law office to protest because, as he said in an interview from his home in Yangon on Friday, "I am not Buddhist."

He described his plight, in person, to Ms. Suu Kyi and other senior party leaders, but was told the people in his constituency had made clear their desire. He resigned and is now running for the United National Congress, which has 10 Muslim candidates.

Ms. Suu Kyi is a "good leader of a good party – but not for Muslims," Mr. Yan Naing said. "I still love her because she was a heroine of our country. But she didn't love me." 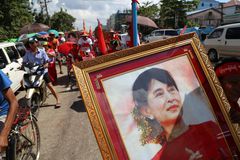 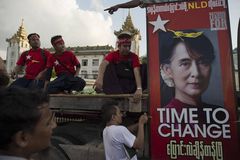