The Buddhist monk grabbed a young Muslim girl and put a knife to her neck.

"If you follow us, I'll kill her," the monk taunted police, according to a witness, as a Buddhist mob armed with machetes and swords chased nearly 100 Muslims in this city in central Myanmar.

It was Thursday, March 21. Within hours, up to 25 Muslims had been killed. The Buddhist mob dragged their bloodied bodies up a hill in a neighbourhood called Mingalarzay Yone and set the corpses on fire. Some were found butchered in a reedy swamp. A Reuters cameraman saw the charred remains of two children, aged 10 or younger.

Ethnic hatred has been unleashed in Myanmar since 49 years of military rule ended in March 2011. And it is spreading, threatening the country's historic democratic transition. Signs have emerged of ethnic cleansing, and of impunity for those inciting it.

Over four days, at least 43 people were killed in this dusty city of 100,000, just 128 kilometres north of the capital of Naypyitaw. Nearly 13,000 people, mostly Muslims, were driven from their homes and businesses. The bloodshed here was followed by Buddhist-led mob violence in at least 14 other villages in Myanmar's central heartlands and put the Muslim minority on edge across one of Asia's most ethnically diverse countries.

An examination of the riots, based on interviews with more than 30 witnesses, reveals the dawn massacre of 25 Muslims in Meikhtila was led by Buddhist monks – often held up as icons of democracy in Myanmar. The killings took place in plain view of police, with no intervention by the local or central government. Graffiti scrawled on one wall called for a "Muslim extermination."

Unrest that ensued in other towns, just a few hours' drive from the commercial capital of Rangoon, was well-organized, abetted at times by police turning a blind eye. Even after the March 21 killings, the chief minister for the region did little to stop rioting that raged three more days. He effectively ceded control of the city to radical Buddhist monks who blocked fire trucks, intimidated rescue workers and led rampages that gutted whole neighbourhoods.

Not all of the culprits were Buddhists. They may have started the riots, but the first man to die was a monk slain by Muslims.

Still, the Meikhtila massacre fits a pattern of Buddhist-organized violence and government inaction detailed by Reuters in western Myanmar last year. This time, the bloodshed struck a strategic city in the very heart of the country, raising questions over whether reformist President Thein Sein has full control over security forces as Myanmar undergoes its most dramatic changes since a coup in 1962.

In a majority-Buddhist country known as the "Golden Land" for its glittering pagodas, the unrest lays bare an often hidden truth: Monks have played a central role in anti-Muslim unrest over the past decade. Although 42 people have been arrested in connection to the violence, monks continue to preach a fast-growing Buddhist nationalist movement known as "969" that is fuelling much of the trouble.

The failure of Nobel Peace Prize-winner Aung San Suu Kyi, now opposition leader in parliament, to defuse the tension further undermines her image as a unifying moral force. Ms. Suu Kyi, a devout Buddhist, has said little, beyond warning that the violence could spread if not dealt with by rule of law.

Ms. Suu Kyi declined to be interviewed for this story.

The spark was simple enough.

Aye Aye Naing, a 45-year-old Buddhist woman, wanted to make an offering of food to local monks. But she needed money, she recalled, sitting in her home in Pyon Kout village. At about 9 a.m. on March 20, a day before the massacre, she brought a gold hair clip to town. She had it appraised at 140,000 kyat ($160 U.S.). With her husband and sister, she entered New Waint Sein, a Muslim-owned gold shop, which offered her 108,000 kyat. She wanted at least 110,000.

Shop workers studied the gold, but the clip came back damaged, she said. The shop owner, a young woman in her 20s, now offered just 50,000. The stout mother of five protested, calling the owner unreasonable. The owner slapped her, witnesses said. Aye Aye Naing's husband shouted and was pulled outside, held down and beaten by three of the store's staff, according to the couple and two witnesses.

Onlookers gathered. Police arrived, detaining Aye Aye Naing and the owner. The mostly Buddhist mob turned violent, hurling stones, shouting anti-Muslim slurs and breaking down the shop's doors, according to several witnesses. No one was killed or injured, but the Muslim-owned building housing the gold shop and several others were nearly destroyed.

By about 5:30 p.m., four Muslim men were waiting at an intersection. As a monk passed on the back of a motorbike, they attacked. One hit the driver with a sword, causing him to crash, witnesses said. A second blow sliced the back of the monk's head. One of the men doused him in fuel and set him on fire, said Soe Thein, a mechanic who saw the attack. The monk died in hospital.

When dawn broke, the only police presence in the area was a detail of about 10 officers. They slowly backed away, allowing the mob to attack, said Hla Thein, 48, a neighbourhood Buddhist elder.

The Muslims fled through the side of the house, chased by men with swords, sticks, iron rods and machetes. Some were butchered in a nearby swamp, but police saved 47 of the Muslims, mostly women and children, by encircling them with their shields and firing warning shots in the air, said Hla Thein, who recounted the events along with four other witnesses, both Buddhist and Muslim.

"We don't want to attack you," one monk shouted at the police, according to a policeman. "We just want the Muslims."

Three days later, on the hill where Muslim bodies were burned, this reporter found the remains of a mix of adults and children: pieces of human skull, vertebrae and other bones, and a singed child's backpack.

About 90 per cent of Myanmar's 60 million people are practising Buddhists, among the world's largest proportion. Many Burmese find it easier to assume a cherished institution of Buddhist monks, at the forefront of Myanmar's struggle for democracy, has been infiltrated by thugs and provocateurs than to admit the monkhood's central role in anti-Muslim violence in recent years.

On the streets of Meikhtila, witnesses saw monks from local monasteries and from Mandalay, a centre of Burmese culture about 100 miles to the north. One such visitor was the nationalistic monk Wirathu.

Wirathu was freed last year from nine years in jail during an amnesty . He had been locked up for helping to incite deadly anti-Muslim riots in 2003.

Today, the charismatic 45-year-old with a boyish smile is an abbot in Mandalay's Masoeyein Monastery. From that power base, he is leading the fast-growing movement known as "969," which encourages Buddhists to shun Muslim businesses and communities.

Wirathu has a quick answer to the question of who caused Meikhtila's unrest: the Buddhist woman who tried to sell the hair clip.

"She shouldn't have done business with Muslims."

The three numbers refer to various attributes of the Buddha, his teachings and the monkhood. In practice, the numbers have become the brand of a radical form of anti-Islamic nationalism that seeks to transform Myanmar into an apartheid-like state.

"We have a slogan: When you eat, eat 969; when you go, go 969; when you buy, buy 969," Wirathu said in an interview at his monastery in Mandalay. Translation: If you're eating, travelling or buying anything, do it with a Buddhist. Relishing his extremist reputation, Wirathu describes himself as the "Burmese bin Laden."

He began giving a series of controversial 969 speeches about four months ago. "My duty is to spread this mission," he said. It's working: 969 stickers and signs are proliferating – often accompanied by violence.

Rioters spray-painted "969" on destroyed businesses in Meikhtila. Anti-Muslim mobs in Bago Region, close to Rangoon, erupted after travelling monks preached about the 969 movement. Stickers bearing pastel hues overlaid with the numerals 969 are appearing on street stalls, motorbikes, posters and cars across the central heartlands.

Wirathu began preaching the apartheid-like 969 creed himself in 2001, when the U.S. State Department reported "a sharp increase in anti-Muslim violence" in Myanmar. Anti-Muslim sentiment was fuelled in March that year by the Taliban's destruction of Buddhist images in Bamiyan, Afghanistan, and in September by al-Qaeda's attacks in the United States.

Myanmar opens door to private media, but how much latitude is there?
April 9, 2013 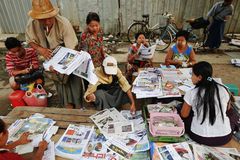