NASA technicians said Saturday that they found no damage following the spectacular thunderstorm that crashed through Cape Canaveral a day earlier, but they need another day to check critical systems.

The space agency hopes to launch the shuttle on Sunday at 7:13 p.m. EDT.

"We're going to wait and see and let the team tell us what the right thing to do is," said Mike Moses, a NASA official. "We're just being extra cautious."

The seven-person crew is facing its third postponement in the past month. The mission was scrubbed twice previously due to a potentially hazardous hydrogen fuel leak.

The day dawned bright and cloudless Saturday, but isolated thunderstorms had been forecast for Cape Canaveral around launch time similar to the type that blew through the area late Friday afternoon.

NASA officials estimated there was only a 40 per cent chance Endeavour would blast off as scheduled at 7:39 p.m. on Saturday.

Nonetheless, the astronauts were calm and relaxed despite the prospect of yet another delay, said Billie Flynn, Ms. Payette's husband.

"They've had two scrubs before, so they've gone through the focus and concentration of getting ready twice, so each time it gets that much easier," said Mr. Flynn, a fighter pilot who spent Friday afternoon with the seven-member Endeavour crew.

"The weather is a crapshoot and it's very much part of the aviator, pilot world so we're used to this. There's no use in getting stressed about it. We'll see how the weather goes, and eventually they're going up."

The 16-day Endeavour mission will mark a historic moment for Canada when Payette, 45, meets up at the International Space Station with fellow Canadian astronaut Robert Thirsk.

It will be the first time Canada has had two astronauts in space at the same time.

Mr. Thirsk is spending six months at the space station, laying the groundwork for deploying Canadian robots onto other planets.

On her second mission to space - Ms. Payette was aboard space shuttle Discovery in 1999 - Canada's chief astronaut intends to significantly up the Canadiana quotient, Flynn said.

"She's also got Alberta beef jerky from Cold Lake, Alta., and maple syrup from a cousin of mine, and everything Canadian that she could have thought of," Mr. Flynn said with a laugh.

The couple's two boys - Brett, 15, and six-year-old Laurier - are at Cape Canaveral and thrilled that their mother is heading to space.

"It's not the mentality of the household to be nervous," Mr. Flynn said.

"That sense of nervousness or anxiety is not there, and it translates to the kids. The kids are sponges of the environment around them and their parents, and for us it's nothing but positive excitement, and that's how they look at this ... they are happy and wired and excited for all that's going to happen."

The space agency has until Tuesday or possibly Wednesday to send up Endeavour before making way for the launch of an unmanned Russian supply ship.

They'll also bring a new member to the station's six-man team and bring to Earth a Japanese astronaut who's been there since March.

When the shuttle arrives at the space station, there will be a total of 13 people there - the most ever at the orbital outpost.

The station is currently home to Mr. Thirsk, two Russian cosmonauts and one astronaut each from the United States, Japan and Belgium.

NASA is scheduled to shut down the space shuttle program in 2010, and will use Russian airlifts to the space station until the next generation of U.S. spacecraft is ready in 2015.

The program has been rocked by two disasters in 126 missions. In 1986, the Challenger exploded 73 seconds after liftoff, and six years ago, the Columbia disintegrated upon re-entry of the Earth's atmosphere. 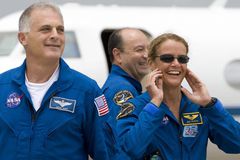