A criminal court in Normandy has sentenced French Nazi ideologue Vincent Reynouard to two years in jail for denying the Holocaust in Facebook postings.

The case stems from a complaint filed by a Caen-based association that honours Canada's Second World War soldiers and was attacked in Mr. Reynouard's postings for its work commemorating the D-Day landings.

"We were expecting to win, but hearing that Reynouard has been sentenced to two years was a great joy," said Christophe Collet, the French high school teacher who heads Westlake Brothers Souvenir association. It is named after three Toronto brothers – George, Tommy and Albert – who died in combat in June, 1944.

Mr. Reynouard represented himself in the three-hour trial in the city of Coutances, although he was not present for the verdict on Wednesday. The prosecution had asked for a one-year jail sentence. The three-judge panel that convicted him doubled that.

The judges likely considered Mr. Reynouard's previous convictions on similar charges, said David Chilstein, a criminal law professor at the Sorbonne. But the sentence also may reflect the broad concern in France at rising anti-Semitism since the killings last month at the satirical weekly Charlie Hebdo and a Jewish supermarket in Paris.

"Prison sentences in freedom-of-speech issues are usually suspended sentences," Prof. Chilstein said in a telephone interview. "But we are in a context of rampant anti-Semitism, and since the January attacks [in Paris] everyone understands the power of words." The court wants to appear tough on anti-Semitism."

The prosecution has appealed the sentence as "illegal," prosecutor Renaud Gaudel told Agence France-Presse. Under French law, Holocaust denial in punishable by up to one year in jail and a €35,000 ($49,923) fine.

Mr. Collet, who attended the trial, said Mr. Reynouard argued in court that his goal is the "rehabilitation of national socialism." He has inundated YouTube with more than 120 videos. In one 44-minute video, Mr. Reynouard criticizes Mr. Collet's commemorations for failing to take into account the French civilians who died in the Allied invasion. More controversially, Mr. Reynouard adds there is "no proof" that the gas chambers ever existed.

Mr. Collet said the trial was important even if it provided Mr. Reynouard a platform for his revisionist views. "This is a struggle that will never end," he said. "We must cherish the sacrifices made by our Allies …. , and we must fight for the rule of law. When you are under attack by Nazis, you must use the law to strike back."

In addition to Mr. Collet's association, which aims to educate young people students about Canada's contribution to the Allied invasion, other plaintiffs were the Paris-based International League Against Racism and Anti-Semitism (LICRA), several rural municipalities and a Roman Catholic high school.

Mr. Reynouard was also sentenced to pay damages. LICRA is to receive €3,500 and Westlake Brothers Souvenir association €500. Mr. Collet said any fines paid to his group will be donated to the family of a Commonwealth war veteran who has had trouble covering his health costs.

Mr. Reynouard was convicted in France in 2007 for Holocaust denial, or négationnisme, and went to prison in 2010 to serve a one-year sentence. His incarceration attracted some attention at the time. Hundreds signed a petition to press for his release and the repeal of the French law banning the denial of crimes against humanity. Signatories included the controversial comedian Dieudonné M'bala M'bala, who went on trial earlier this month on charges of condoning terrorism. The charges are linked to his Facebook post – "I feel like Charlie Coulibaly" – referring to Ahmedy Coulibaly, the kosher supermarket killer.

Mr. Reynouard, a former mathematics teacher who was sacked by the French Education Ministry for his views in 1997, has also sparked controversy in Belgium. A court in Brussels sentenced him to a one-year jail term in 2008 for "denying the genocide committed by the German national-socialist regime." The sentence was confirmed by a court of appeal in 2011. 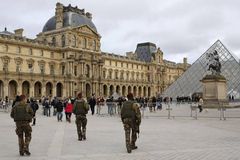 French police arrest eight suspected of involvement in network to send fighters to Syria
February 3, 2015
Follow us on Twitter @globeandmail Opens in a new window
Report an error Editorial code of conduct
Due to technical reasons, we have temporarily removed commenting from our articles. We hope to have this fixed soon. Thank you for your patience. If you are looking to give feedback on our new site, please send it along to feedback@globeandmail.com. If you want to write a letter to the editor, please forward to letters@globeandmail.com.
Comments