It was the most anticipated address to Congress in recent years – tickets to the gallery were impossible to get. Nobel laureate Elie Wiesel, financial magnate Sheldon Adelson and former politician Newt Gingrich were among those who filled the seats beneath the white Vermont marble relief portrait of Moses that looks out over the proceedings.

While critics are unlikely to be swayed, Israeli Prime Minister Benjamin Netanyahu gave the performance of his career and once again succeeded in putting the issue of Iran's nuclear weapons front and centre in public debate.

Painting a portrait of a diabolical regime in Tehran, Mr. Netanyahu warned that the nuclear deal with Iran now being negotiated by the United States "will not prevent Iran from developing nuclear weapons – it will all but guarantee that Iran will get those nuclear weapons – lots of them."

With several dozen Democrats boycotting the performance, the chamber resounded with near unanimous support.

It was the third time the Israeli leader has addressed a joint session of Congress – only one other statesman has been accorded that honour: Winston Churchill.

Not everyone was a fan. Nancy Pelosi, the House Democratic Leader, said she "was near tears" at one point, not out of admiration but because of "the insult to the intelligence of the United States" and "the condescension toward our knowledge of the threat posed by Iran."

U.S. President Barack Obama said he didn't watch Mr. Netanyahu's performance from his White House office, but did scan the transcript of his remarks. "As far as I can tell, there was nothing new," he said.

On the core issue of "how do we prevent Iran from obtaining a nuclear weapon … the Prime Minister didn't offer any viable alternatives."

The President may dismiss the speech, but he won't be able to ignore its impact.

"Let's be honest, the speech we heard today was impressive," acknowledged Isaac Herzog, Mr. Netanyahu's chief political opponent in Israel. "But as impressive as it was, it won't stop the Iranian nuclear program, nor will it influence the burgeoning agreement [with Iran], neither in content nor in schedule."

To achieve that, Israel needs the United States, says Mr. Herzog, who heads Israel's Labour Party. And Mr. Netanyahu has jeopardized Israel's relations with the U.S. President, he adds.

"The painful truth," said Mr. Herzog, "is that after the applause, Netanyahu is left on his own, Israel is left isolated and the negotiations with Iran will continue without Israeli involvement."

Canada's official reaction to the Israeli leader's address came in a carefully worded statement from the office of Foreign Affairs Minister Rob Nicholson.

"While we support the efforts of the P5+1 process," the statement said, referring to the U.S.-led negotiations with Iran being conducted by the permanent five members of the UN Security Council plus Germany, "we're skeptical of Iran's nuclear intentions. We note the IAEA [International Atomic Energy Agency] recently indicated that Iran continues to hide the possible military dimension of their nuclear program."

Mr. Netanyahu's initiative has put the Harper government in the awkward position of wanting to express strong support for Israel, without offending Canada's closest allies.

"I agree with Obama," said Sheldon Gordon, a business writer and member of Canadian Friends of Peace Now. "Netanyahu added nothing new."

"I see it as simply an election ploy," he concluded.

Shimon Fogel, the CEO of the Centre for Israel and Jewish Affairs, insists Mr. Netanyahu was "not principally motivated by election considerations."

"There was as much criticism of him for going to Washington as there was support," he said. "I'd call it a wash."

The important thing was that "the issue of Iran was catapulted" to world attention, Mr. Fogel said. "That wouldn't have happened without his speech."

"Notwithstanding his incredible oratory skills," said Smadar Peretz, a dual citizen now living in Canada, "Netanyahu had no business attacking the U.S. administration the way he did."

"It's like going into someone's home and criticizing how they raise their children," she said. "Such chutzpah."

Ms. Peretz, an academic at Toronto's MaRS Discovery District, acknowledged the Israeli leader turned some heads. "It's true some Likud supporters who drifted away from Netanyahu because they thought he wasn't tough enough may have been impressed" by his bravado, she said. "But, as an Israeli, I'm furious."

The address, broadcast live at the dinner hour in Israel, comes exactly two weeks before a closely contested election; perhaps in the nick of time for Mr. Netanyahu. A public opinion survey released just hours before his speech indicated his Likud party would capture just 21 seats if the vote were held earlier this week, while the rival Zionist Union led by Mr. Herzog would take 24 seats.

At the start of his message to Congress, Mr. Netanyahu sought to reduce the inflamed politicization revolving around his visit, which has seen tensions raised between Democrats and Republicans over the Obama administration's negotiations with Iran.

He expressed gratitude to Mr. Obama for his public and private support of Israel, including U.S. military assistance and even help in contending with recent forest fires.

"I regret that some see my appearance here as political," Mr. Netanyahu said, seeking to unite both U.S. parties in continued support for the Jewish state.

"I know that no matter on which side of the aisle you sit, you stand with Israel."

What Netanyahu gets wrong about a deal with Iran – and what he gets right
March 3, 2015 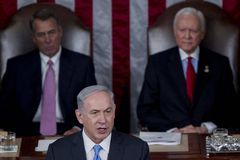 Tension on display ahead of Netanyahu speech to U.S. Congress
March 2, 2015 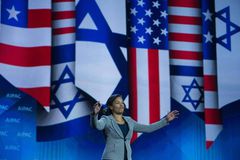 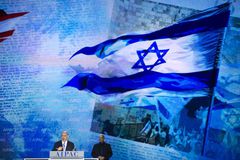 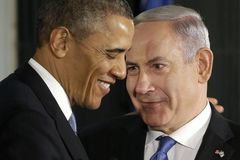