A cigarette in China is solace from the drudgery of work. It's entry into a club of card-playing men. It's fuel for a night of drunken deal making. And it's a token of belonging: More than half of Chinese men smoke, inhaling nearly a third of the world's cigarettes and, in the process, making their government rich. Fully 7 per cent of China's state revenues come from tobacco.

Nicotine has long been to China what alcohol is to a bar. Mao Zedong and Deng Xiaoping could both be identified by their cancer sticks of choice. Mao once called smoking "a deep-breathing exercise" (he lived to 82); Chinese hotels and airlines gave them out for free. Even today, one in 10 13- to 15-year-old boys smokes.

So the giant no-smoking signs affixed to Beijing's Bird's Nest Olympic Stadium Sunday fluttered in an air of apparent futility.

But those who put them there offered hope, instead, that things are about to change. Come Monday, a new law will mandate that vast areas of Beijing's indoor spaces go smoke-free. Airport smoking lounges will be locked shut, thick air will vanish from karaoke bars and even hospitals will breathe a little easier.

The law is intended to be another major step for China into modernity.

Or at least, that's the way it's supposed to go. China has for years tried to root out smoking, with little success. So on Sunday, Beijing sought to make a splash, bringing dancers to the Bird's Nest from one of its elite kindergartens to kick and twirl to modified lyrics for Little Apple, a wildly catchy pop tune.

"For a happy life, we must work out civilized behaviours and start a beautiful non-smoking life," the song went. "So let's move on. We are all happy little apples."

Perhaps no one is happier than the World Health Organization, which worked closely with Beijing to write an anti-smoking law that stands to be among the most influential on earth. If it works, it will serve as the template for national Chinese rules and make Beijing an example for the entire Asian region.

"Beijing is the leader – it's incredibly important for China, and incredibly important beyond," said Bernhard Schwartlander, the WHO representative in China. "This may be the single most important thing that will happen this year in terms of the health of the Chinese people." He noted that though tobacco is profitable for China, smoking kills an estimated one million people a year and its health-care costs outweigh its revenues.

The new policy mandates that all indoor public spaces be smoke-free – including hotels, offices and restaurants – and demands the same for some outdoor places, such as schools and sites with historical and cultural importance.

"This law is for people's health, so people will actively support it," said Mao Qunan, a director-general with the National Health and Family Planning Commission, which is charged with the new rule's enforcement. Local surveys have left Beijing "very confident" that even smokers support what it's trying to do, he said.

There is, however, no shortage of reasons for doubt. The June 1 no-smoking law is merely the latest in a series of similar attempts – all of which have, to varying degrees, failed. Recent years have seen Beijingers, cigarettes in hand, merrily ignore rules meant to bar smoke from taxis, schools, railway stations and office buildings. Before the 2008 Olympics, the city promised 100,000 inspectors would ensure no scofflaw escaped unpunished. But with fines as low as $1.40 (U.S.), the inspectors had little punishment to give. Around China, similarly ill-conceived laws have failed in similarly spectacular fashion.

The new Beijing law has some features meant to give it more teeth, saddling restaurant owners with most of the fault – and fines – if someone smokes inside their space, and imposing new restrictions on advertising, which will be barred from public spaces and schools, where the tobacco industry had made inroads.

The city has retrained thousands of its health inspectors to enforce the ban and set up a hotline for people to report violators. But it admits the rules won't work without self-policing.

"This smoke-free law is a challenge for law enforcement in Beijing," Mr. Mao said. "We expect an active response from Beijing citizens and residents."

In conversations on Chinese social media, those citizens were skeptical.

Another pointed to the 20 million farmers who grow tobacco as part of a giant system that feeds into state-owned China National Tobacco Corp. and the 2.5 trillion cigarettes it manufactures every year.

"If you want to stop smoking, it would be better to shut down the tobacco companies – but that's impossible, because tobacco is so profitable for government," the person posted.

Outside the Bird's Nest Stadium Sunday, a group of local photographers sat down to play cards. Smoke wafted around them. A recent hike in a cigarette price has added a dime to the price of a pack – but it's nothing compared with salaries that have been rising at a double-digit clip. In Beijing, a pack of smokes still sells for $1.

"If they can raise the tobacco tax to 3,000 per cent, then maybe it will make a difference," scoffed one man, who gave his surname as Wang.

Beside him, a woman watched and offered a bit more hope. If Beijing can keep people from smoking indoors, maybe it will make a difference, she said.

"Many of these guys would love to stop smoking," she said, and pointed at Mr. Wang. "Even his parents can't make him stop. Maybe this new rule will help." 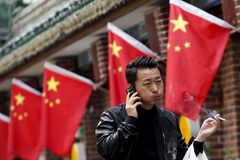 Opinion
Let’s take bolder steps to stamp out smoking
May 19, 2015 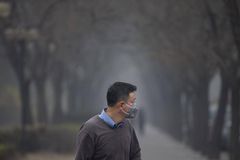