While flags fly and horns honk for the second anniversary of Libya's revolution this weekend, a group of young entrepreneurs will be sleeping at their office to protect it from criminals and religious zealots.

The young men should have had cause to celebrate. Fresh out of university, they've created one of Tripoli's most successful design and media companies, boosted by new freedoms since the fall of dictator Moammar Gadhafi.

Yet, instead, they're worried by new threats: rising crime, religious intolerance and the uncontrolled reign of armed militias. Islamists have denounced the businessmen as "infidels" because their company's name, Odysseia, is a reference to Greek mythology. They can't display their sign outside their walled compound and they've lost business because of their name.

Libya's street revolution, which began on Feb. 17, 2011, and culminated in a campaign of air strikes by Canada and other NATO members, has brought freedom and hope to millions of people here. But it has also brought a new fear of the power of Islamist extremists and heavily armed militias.

Libya's weak government has proven unable to rein in the extremists, and it has become dependent on the militias to fill the security vacuum after the collapse of the Gadhafi-era police and army. It has even granted recognition to some of the militias, which run checkpoints and control entire neighbourhoods. Some have degenerated into gangs involved in kidnapping and crime, while others enforce a purist interpretation of Islam.

"They are more dangerous because they have more power now," says 26-year-old Zuhair Abusrewei, a stylishly dressed urbanite who is one of the founders of Odysseia.

"I don't trust security guys at checkpoints with flip-flops and cigarettes, or extremists with long beards. Now the government says they are official, so I don't trust the government either. We don't want Libya to become like Afghanistan or Iran or Saudi Arabia."

Many Libyans remain optimistic. Compared to a year ago, more cafés and restaurants are open, the streets are less deserted at night and there is a sense of growing normalcy in daily life.

Libya still has huge advantages over other Arab Spring countries. It has vast oil revenue and a relatively small population of just six million people to spread it among. Foreign-investment projects and massive construction contracts, suspended for the past two years, could be ready to resume soon. Elections last July were relatively free and fair. The country's police and army are slowly being retrained, offering hope that the security crisis could eventually be solved.

Yet there are deep concerns about persistent abuses by the militias and extremists – including kidnappings, torture, extortion, unlawful detentions and the destruction of Sufi shrines and Christian graves – and the government's failure to investigate or halt those crimes. An estimated 8,000 people are still held in murky conditions in detention centres, usually without charges or trials.

"Libya's security forces remain weak and unable to police much of the country, despite some government efforts," said a report by Human Rights Watch this month. "Lawlessness is particularly acute in the East and South, where armed militias and criminal groups act with impunity."

The abuses tend to target the poorest of Libya's poor, including the African migrants who came here to work. Their suffering shows how the militias continue to enjoy almost complete impunity for their actions.

Stephen Wogbe, a soft-spoken 34-year-old Ghanaian who works as a caretaker at the Anglican church in Tripoli, has seen many of his friends imprisoned for months. He says they are held in abandoned buildings by militia groups that routinely use detention as a way of extorting money.

Migrants from sub-Saharan Africa, who came to Libya for jobs in a wealthier economy, are often accused of being Gadhafi sympathizers, mercenaries or illegal residents. Yet, because of a hostile bureaucracy, it is virtually impossible for most to get official residence permits. The militias demand up to $1,000 for the release of the migrants – a huge sum for them. Armed robberies are also common, often in bank queues when the migrants are trying to send money home.

"It's very difficult to differentiate between the criminals and the militias," Mr. Wogbe said in an interview at his church. "All of them have guns now. They all claim to be acting in the name of the government, but I don't think the government knows about it."

Mr. Wogbe arrived in Libya two years ago, working as a car washer and construction labourer until he found the job at the church, which ministers to many Africans and Asians here. Now he tries to find money for friends like Daniel, a barber from Ghana who was detained in December and won't be released until the militia is paid about $800 through a middleman.

"It makes me bitter," he says. "The militias were shouting for freedom every day, but they don't want us to live in peace. They take the law into their own hands and do whatever they want. Why should people be treated like animals?"

The power of the militias and the extremist groups is the biggest obstacle to normalcy in Libya. Security alerts, linked to threats by the extremists, have scared away foreign investors and led to the sealing of Libya's borders this weekend. Tripoli's museums, with their priceless Roman treasures, have remained shut because the curators are afraid of attacks by extremists who see Roman statues as idolatrous.

The extremists' power is hampering key reforms. Government officials are reluctant to tackle the bloated Gadhafi-era bureaucracy, in which more than a million people were guaranteed jobs, because the firing of employees could trigger reprisals by armed men.

Libya's future could depend on whether its post-election government can revive the police and army, reducing its dependence on the militias. Optimists such as Guma El-Gamaty, a founder of the moderate Taghyeer political party, are confident that the militias will be reduced dramatically within the next two to three years. "Once the state is strong, the government will deal with them firmly," he says.

Yet he also admits that it is taking too long. "All Libyans are frustrated by the slow pace of the transition." 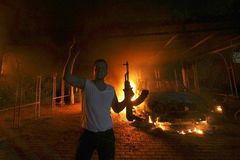 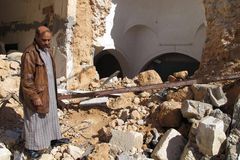 British embassy in Tripoli aware of potential threat against it
January 28, 2013 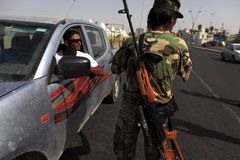 Canada also urging citizens to get out of Benghazi because of terror threats
January 25, 2013 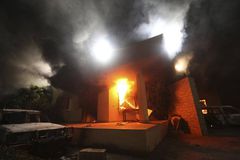 Opinion
Barring Gadhafi’s henchmen from politics might not be such a wise idea
December 31, 2012 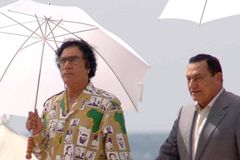