The combative Mr. Christie, who skewered Mr. Rubio but was, in turn, rejected by New Hampshire voters, said he was leaving "without an ounce of regret."

For Mr. Trump, the once-improbable presidential bid has become a reality, confirmed by his win in New Hampshire and continued dominance in national polls. Asked which challengers worried him, Mr. Trump said: "I think they're all really potential threats … but I'm okay at handling threats."

Mr. Kasich took the high road. "Maybe, just maybe, we are turning the page on a dark part of American politics," he said. Mr. Kasich has refused to resort to negativity and instead campaigned on his long experience, both in Washington and in the crucial swing state of Ohio, where he turned around a recession-battered economy. "Tonight, the light overcame the darkness," he told supporters after posting a solid second place behind Mr. Trump, but well ahead of the other centrists.

Whether the light of upbeat confidence will follow Mr. Kasich south will be his next challenge as he struggles to eclipse his main rivals for the mantle of the party's moderate standard-bearer.

Mr. Kasich, barely known nationally, faces an uphill battle. The next Republican primary – in two weeks – will be in South Carolina, the first primary in a southern state and the first one that, unlike Iowa and New Hampshire, isn't overwhelmingly white and is, thus, far more representative of broader American demographics.

South Carolina is home to a cross-section of Republican voters. There are pockets of suburban wealth, evangelicals scattered across the state, large numbers of active and retired military personnel and a strong Tea Party presence.

Former governor Jeb Bush and Mr. Rubio, both from nearby Florida, also need strong performances in South Carolina. Mr. Bush, once presumed as the natural front-runner given his name recognition, vast war chest and backing from the Republican establishment, managed to salvage an acceptable fourth place in New Hampshire, but his campaign remains mired in underperformance.

Nevertheless, New Hampshire voters may have winnowed the race-within-the-race among the centrists seeking to emerge as the "anti-Trump" alternative to the self-financing property magnate.

Mr. Christie, the former federal prosecutor who, more than anyone else, punctured Mr. Rubio's aura of charismatic untouchability by dubbing him the "boy in the bubble" and savaging the first-term senator as someone who has never run anything, came a disappointing sixth.

Mr. Christie, like Mr. Kasich, had spent months stumping in New Hampshire and both needed strong showings in the state. Only Mr. Kasich succeeded.

Ms. Fiorina, the only woman in the Republican race, also quit after failing to attract any significant support in Iowa or New Hampshire.

"While I suspend my candidacy today, I will continue to travel this country and fight for those Americans who refuse to settle for the way things are and a status quo that no longer works for them," she said.

Several other Republican hopefuls in the once-crowded field, which numbered 17 last year, will likely also end their seemingly hopeless quests for the party's presidential nomination. Ben Carson, the retired neurosurgeon and the only African-American in the race, is lagging far behind. So is former Virginia governor Jim Gilmore, who is still officially running but hasn't been campaigning for months.

Only five serious Republican candidates will likely be left when South Carolina votes on Feb. 20. Each will have a different objective. Mr. Trump needs to show he can build on the frustration-fuelled win in New Hampshire. Mr. Bush needs to beat his Floridian rival, Mr. Rubio, and claw back a place among the front-runners. Mr. Rubio suffered a serious setback in New Hampshire and apologized to supporters for his miserable showing after wilting under fierce attacks from Mr. Christie in the last debate. "I know many people are disappointed," a shaken Mr. Rubio told stunned supporters as the votes were tallied. "Our disappointment tonight is not on you. It's on me. I did not do well on Saturday night."

Meanwhile, Texas Senator Ted Cruz, who won in evangelical Iowa, came a better-than-expected third in secular New Hampshire and claimed "the real winner is the conservative grassroots, who propelled us to outright victory in Iowa and to a far stronger result and outcome in New Hampshire than anyone had predicted."

Mr. Cruz heads to the Bible Belt confident he can outlast the centrists. "Now, we go on to South Carolina, the Palmetto State, and you know, Washington liberals may find South Carolina far less hospitable," he said.

And Mr. Kasich, buoyed by his strong showing in New Hampshire but with little money and almost no staff or volunteers in South Carolina, needs to show that he isn't a one-state wonder.

The Republican field has more winnowing ahead before it becomes a choice between a centrist and a right-wing candidate. This is in contrast to the Democratic contest, which has been effectively a two-person race for months, with the avuncular Mr. Sanders turning a leftist insurgency into a movement that now genuinely threatens former secretary of state Hillary Clinton's presumed invincibility. 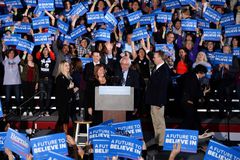 Return on investments: 6 graphs that tell the story of the New Hampshire primary
February 8, 2016 Donald Trump gets the devotion of the disaffected in New Hampshire
February 8, 2016 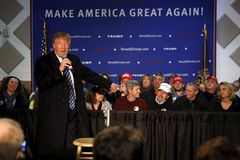 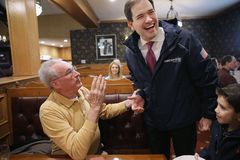 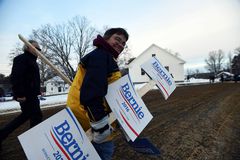