ADAM NOSSITER and RICK GLADSTONE
ABUJA, NIGERIA
From Wednesday's Globe and Mail
Published May 6, 2014 Updated May 6, 2014

Armed extremists in northern Nigeria have carried out another brazen kidnapping of young girls, the UN Children's Fund and a local official said Tuesday, adding to the international uproar over the abduction of more than 200 girls seized from a school in the same part of the country last month.

Details of the additional kidnapping came as the Obama administration announced that it had offered to help Nigeria's president, Goodluck Jonathan, find and prosecute those responsible for the April mass abduction, which has traumatized Nigeria and garnered attention worldwide.

Jay Carney, a White House spokesman, told reporters in Washington that the assistance, including U.S. military personnel and experts in hostage negotiations, was offered to Mr. Jonathan in a telephone call with U.S. Secretary of State John Kerry. In addition, the State Department issued an updated warning to U.S. citizens, admonishing them to avoid non-essential travel to parts of northern Nigeria "due to the risk of kidnappings, robberies and other armed attacks."

UNICEF said the second kidnapping involved at least eight girls who were seized in their homes in Borno state to prevent them from attending school. It called the latest abduction "an outrage and a worsening nightmare for the girls themselves, and for the families of the more than 200 girls who have been stolen from their communities in the last several weeks."

Manuel Fontaine, UNICEF's regional director for west and central Africa, said in a telephone interview that the information was obtained from the agency's contacts for the area, which has been riven for years by attacks on villages and schools by the Islamist group Boko Haram. The leader of the group, Abubakar Shekau, has claimed responsibility for the mass abduction last month in a newly released video in which he vowed to sell the girls like slaves.

"The situation in northeast Nigeria has been difficult for a long time," Mr. Fontaine said. The mass anger and global outcry caused by the abductions is important, he said, because it shows that "at some point people say enough is enough."

Hamba Tada, a local official in Gwoza, another town in the area, offered further confirmation and additional details of the latest kidnapping, although his account differed in some respects.

Mr. Tada said 11 girls, 12 to 15 years old, had been abducted from two villages, Warabe and Wala, on Sunday night by members of Boko Haram. He said the kidnappers, armed with AK-47 rifles, had not shot anyone but seized grain and livestock from the villagers "while the abducted girls were hurled into an 18-seater bus before they fled."

"The gunmen only warned the villagers against alerting any security personnel on the abduction of girls," Mr. Tada said. "They promised to deal with anyone that violates their order."

The accounts contradicted the police commissioner in Borno state, Lawan Tanko, who denied there had been any new abductions.

The news came as top human-rights figures added their voices Tuesday to the anger over the first mass abduction on April 14.

Navi Pillay, the UN high commissioner for human rights, said through a spokesman that Boko Haram would be held accountable for the kidnappings.

"We warn the perpetrators that there is an absolute prohibition against slavery and sexual slavery in international law," Ms. Pillay's spokesman, Rupert Colville, told reporters at a news briefing. "That means anyone responsible can be arrested, charged, prosecuted and jailed at any time in the future. So just because they think they are safe now, they won't necessarily be in two years, five years or 10 years' time."

Cristina Finch, managing director of Amnesty International USA's identify and discrimination unit, which focuses on women's human rights, said the abductions reflected what she called "yet another example of the ways in which violence against girls and women affects every aspect of their lives."

The kidnappings have gripped Nigeria, ignited a rare anti-government protest movement and embarrassed the government of Mr. Jonathan, which has so far been unable to rescue the teenage girls. They were abducted from their school in a remote corner of northeastern Nigeria by armed and uniformed men, loaded into trucks and driven into a dense forest at night. By some counts 276 remain missing.

In the video claiming responsibility for the abductions, the Boko Haram leader threatened to "sell them in the market," adding that he would "give their hands in marriage because they are our slaves."

President Barack Obama and other world leaders have condemned the mass abductions in Nigeria, Africa's most populous country. Mr. Jonathan has struggled over how to battle Boko Haram, which has terrorized parts of Nigeria for years.

Denunciations of the Boko Haram abductions also came from a pre-eminent Islamic theological institute in Egypt, Al-Azhar, which said Tuesday that the abduction "completely contradicts the teaching of Islam and its tolerant principles."

The actress Angelina Jolie, who is the special envoy for the UN refugee agency, said at an appearance in Paris that Boko Haram's actions were "unthinkable cruelty and evil." 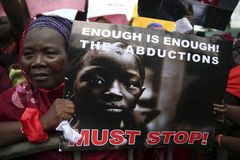