In the city of northern Kaduna, where 800 people were killed in violence after the last elections in 2011, supporters of election winner Muhammadu Buhari streamed onto the streets, waving flags, dancing and singing in celebration. (Jerome Delay/AP)

Outgoing leader Goodluck Jonathan likely staves off outbreak of violence with concession to Muhammadu Buhari: 'Nobody's ambition is worth the blood of any Nigerian.' Geoffrey York reports from Nigeria

Nigeria’s population, which is the largest in all of Africa and 8th in the world.

The number of ethnic groups that make up Nigeria.

The 2014 worth of the Nigerian economy, which is greater than South Africa ($370-billion).

Nigeria’s ranking out of 187 on United Nation’s Human Development Index.

The number of Nigerians killed in Boko Haram attacks in 2014, according to Human Rights Watch. In 2015, more than 1,000 civilians have been killed so far.

Nigeria’s ranking on a list of 174 countries and territories on The Corruption Perceptions Index, which looks at how corrupt their public sector is perceived to be by ordinary people.

With his nation braced for potential violence, Nigerian President Goodluck Jonathan has astonished many of his supporters by conceding defeat to his archrival, retired general Muhammadu Buhari, in the closest-fought election in the history of Africa’s biggest and richest country.

It was a historic moment, heralding a new era here. Mr. Jonathan became the first Nigerian leader ever to accept democratic defeat, handing over power to an austere anti-corruption fighter and former military ruler who had converted to democracy.

“Nobody’s ambition is worth the blood of any Nigerian,” Mr. Jonathan said in a late-night statement on Tuesday after results showed him more than two million votes behind Mr. Buhari. “The unity, stability and progress of our dear country is more important than anything else.”

It was an admission that bloodshed could loom if the ruling party refused to accept defeat. Many in his party were already resisting the election result, including a former cabinet minister who disrupted the final vote count on Tuesday by screaming furiously at the chief election commissioner and accusing him of bias.

In the volatile northern city of Kaduna, where Mr. Buhari lives, the fear of violence was obvious. Even three days after voting day, much of the city was a ghost town: shops were shuttered, streets were empty, offices were closed and people were staying indoors for fear of a repeat of the 2011 slaughter, when 800 people were killed in post-election chaos here.

Mr. Jonathan’s concession may have defused the threat of violence. While thousands of Buhari supporters flocked onto the streets of Nigerian cities to celebrate his victory, the reaction in Kaduna was noticeably restrained. Religious leaders here, worried about potential rioting and looting, urged their followers not to “over-celebrate.”

Kaduna, a religiously mixed city where Mr. Buhari piled up a landslide in the local vote, had suffered the worst of the post-election violence in 2011. This time the reaction in the streets has been impressively peaceful so far.

Hundreds of people came onto the streets, cheering, dancing, racing their motorcycles and honking their car horns, but refraining from anything worse. Some waved V-for-victory signs, while others waved the straw brooms that were Mr. Buhari’s symbol of his promise to clean up the country. Yet as night fell, most people remained at home, still remembering what happened after the last election.

An Associated Press count of final results showed Muhammadu Buhari with 15.3 million votes, and Goodluck Jonathan with 12.9 million votes. Borno state, the region worst-affected by Boko Haram and from where 250 schoolgirls were abducted last April, was the last of the 36 states to report. (TRISH McALASTER/THE GLOBE AND MAIL 8 SOURCE: REUTERS, ASSOCIATED PRESS)

Hassan Adamu, a Buhari supporter, said the imams in Kaduna’s mosques had urged restraint in prayers on Tuesday. “That’s why you see the town is so calm,” he said. “We’ve been given instructions: Let the celebrations be low-profile.”

The imams, he said, were worried that the celebrations could easily spill over into crime if the crowds decided to loot the shops of merchants who had locked their doors in fear of violence.

Nigeria’s election has been balanced on a knife edge between optimism and fear. Millions of voters demonstrated their optimism by queuing in massive lines at the voting stations on Saturday, patiently enduring long delays.

Yet anyone who talked to the voters quickly discovered the subtext of fear. In a historically close election race, many Nigerians worried that the reaction could be even worse than in 2011. In Kaduna, for example, many central streets have been empty all week, with shops shuttered as well as banks, government offices and many gas stations closed.

“People are afraid of the unknown,” said John Dabish, a 55-year-old civil servant who had ventured out to stock up on food. “Everyone is watching. Nobody is going to work except the military.” 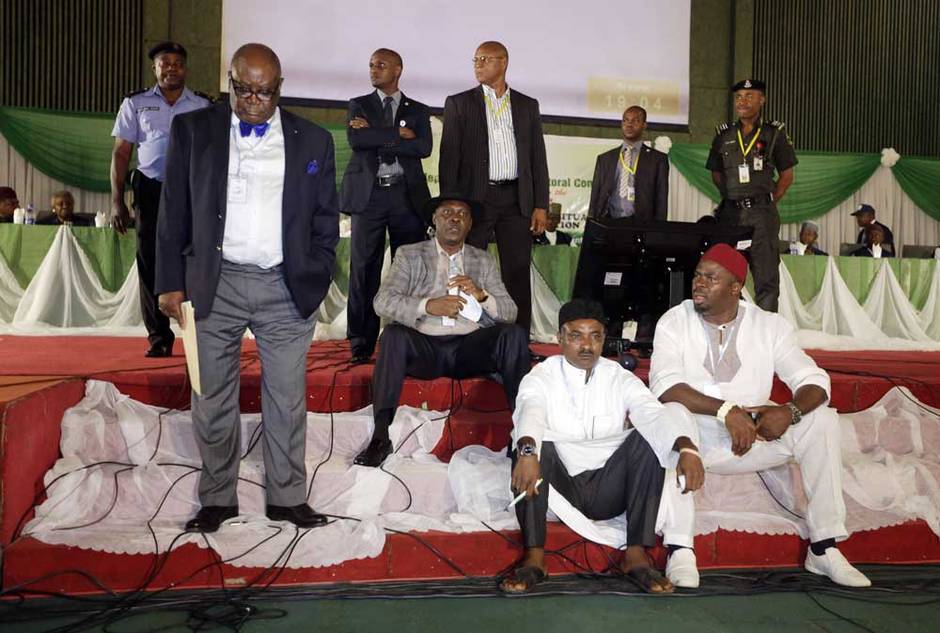 Peter Godsday Orubebe, centre, and members of the People’s Democratic Party, sit during the announcing of election results, in Abuja on Tuesday. Mr. Orubebe disrupted the counting by screaming furiously at the chief election commissioner, accusing him of bias. (Associated Press)

While the final outcome was a giant victory for democracy, it may have been a close call. As late as Monday, with votes still being counted, the United States and Britain issued an extraordinary statement, warning that some Nigerian politicians might be trying to interfere in the vote-counting process. Their statement may have warned off a last-ditch backroom effort to prevent a Buhari victory.

“Because of their intervention, we were able to get it right,” said Moshood Olowookere, a union leader and Buhari supporter in Kaduna. “We really appreciated it.”

Earlier in the campaign, some factions in the ruling People’s Democratic Party had campaigned publicly for the removal of Attahiru Jega, the fearless chairman of Nigeria’s independent election commission. If they had won, the road to electoral fraud would have been wide open. But their efforts were rejected by Mr. Jonathan, allowing Mr. Jega to maintain his independence.

Mr. Jega emerged as the biggest hero of the election. In one of several moves to fight electoral fraud, he eliminated nearly five million duplicate names from the voter registry. The impact of this became clear this week when the voter turnout in ruling-party strongholds was far lower than it had been in 2011, implying that the vote totals had been artificially inflated in the last election.

Even on Tuesday, in the final hours before the results were announced, some elements in Mr. Jonathan’s party were still attacking Mr. Jega. A representative of the ruling party, former cabinet minister Peter Godsday Orubebe, screamed furiously at Mr. Jega in the vote-counting hall for several minutes as the final tally was underway. “You are tribalistic!” he shouted at Mr. Jega. “You are partial!”

Mr. Jega calmly and patiently waited until the outburst was over, and then resumed the vote-tallying. 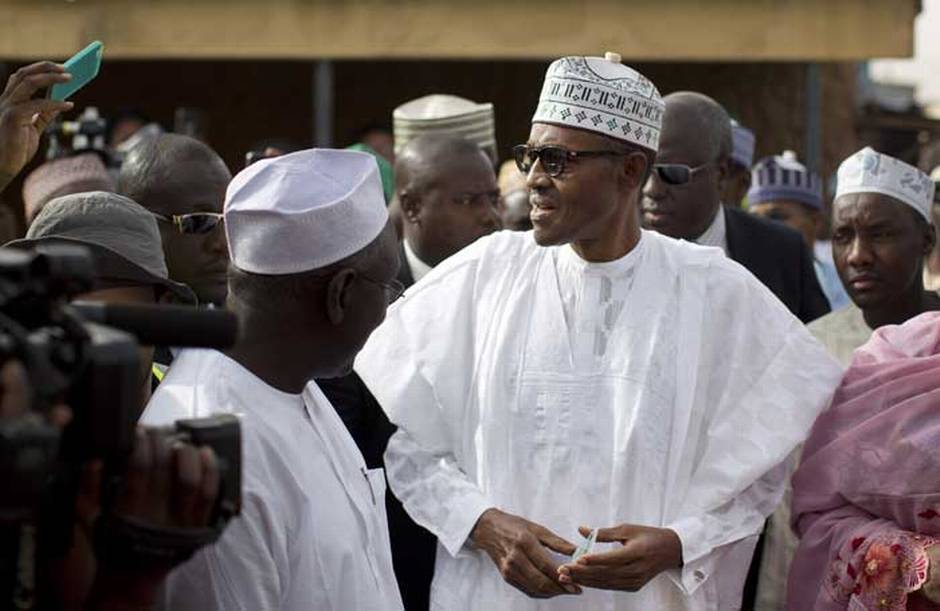 Opposition candidate Muhammadu Buhari, center, arrives to validate his voting card using a fingerprint reader, prior to casting his vote later in the day, in his home town of Daura, Nigeria Saturday, March 28, 2015. (AP Photo/Ben Curtis)


Muhammadu Buhari, 72, is poised to be the next president of Africa’s most populous country. Born in Daura in Katsina state in northern Nigeria, the former military ruler embodies the divisions and contradictions of Nigerian society and politics.

As a politician belonging to the mainly Muslim and Hausa-speaking north, he tapped into deep dissatisfaction over how the central government was handling the threat of Boko Haram, tackling corruption and redistributing wealth.

But this is not his first brush with power. Nigeria, long-plagued by military rule and coups, is familiar with the former general and oil minister in the military dictatorship of the 1970s. He was eventually installed as head of state at the beginning of 1984 and served in that role for 20 months.

Mr. Buhari carried out a campaign against waste, corruption and indiscipline. In one telling example, tardy civil servants were punished and humiliated by being made to do “frog jump” exercises.

Amidst growing unhappiness with the economy, Mr. Buhari, who came to power following a coup, was eventually ousted in a coup and spent 40 months in detention.

In 1999, Nigeria took a turn to democracy – and has stayed on that path. In the past three elections, Mr. Buhari has tried for the top job. In 2011, he lost to Goodluck Jonathan – a loss that was marred by postelection riots sparked by Buhari supporters who claimed the election results were rigged. More than 800 were killed in the ensuing violence in the north, making it one of the bloodiest elections in the country’s history, according to human-rights observers.

In the run-up to the 2015 presidential election, Mr. Buhari presented himself as a reformed democrat willing to tackle corruption and Boko Haram. Earlier this year, he told The Globe and Mail: “We have to stick to the Constitution of the country. Once upon a time, I was a military man. But I do not want to militarize democracy.” -- Affan Chowdhry 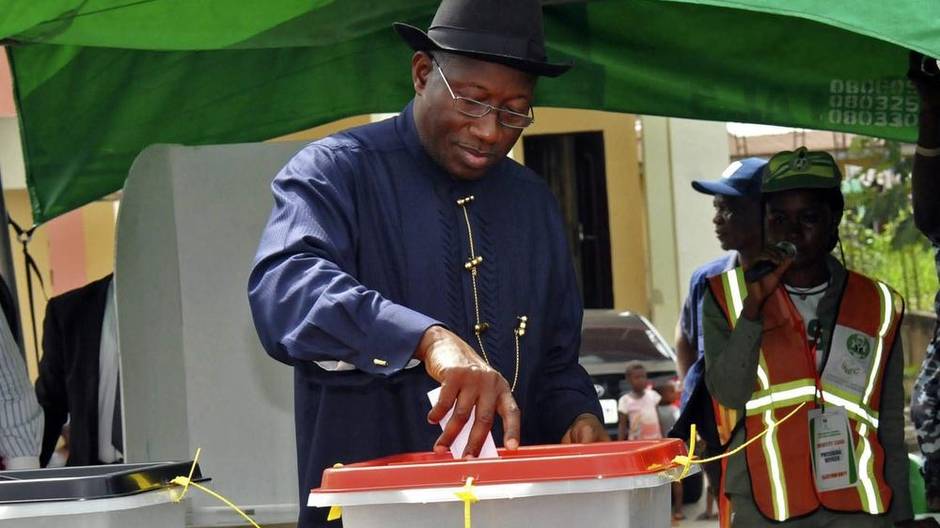 
Goodluck Jonathan, 57, is Nigeria’s outgoing President. A Christian from the Niger Delta region, he first came to power in 2010 as the country was gripped by a leadership crisis.

Rarely seen without his fedora hat, the trained zoologist was the vice-presidential candidate on the People’s Democratic Party (PDP) ticket in the 2007 election. His running mate and eventual boss, Umaru Musa Yar’Adua, was a Muslim from the north. The PDP won the election, but Mr. Yar’Adua suffered from health problems that required extended trips to Germany and Saudi Arabia for treatment.

Amidst growing concerns over who was in charge, the country’s National Assembly sought to fill the power vacuum by making Mr. Jonathan acting president. He was eventually sworn is as President when Mr. Yar’Adua died in May, 2010.

Mr. Jonathan defeated Muhammadu Buhari in the 2011 election. What followed was a period of growing insecurity. The spread of Boko Haram forced 1.5 million Nigerians to flee their homes, and the kidnapping of 250 girls from the town of Chibok raised international alarm. In 2015, Mr. Jonathan vowed to crush the insurgency. With his defeat, the party that has ruled Nigeria since its transition to democracy in 1999 has been ousted from power. -- Affan Chowdhry