Despite technical glitches and terrorism fears, millions of Nigerians queued patiently at voting stations on Saturday for Africa's biggest election, waiting many hours to cast their ballots in what is seen as the closest-fought contest in Nigerian history.

Unofficial voting results from scattered districts on Saturday night seemed to show that the main opposition candidate, Muhammadu Buhari, was holding an early lead over President Goodluck Jonathan in urban areas, but it was far too early for any definitive trend to be clear.

Boko Haram was reported to have killed 41 people in northeastern Nigeria on Saturday in an attempt to disrupt the election, and the widespread technical problems meant that about 300 of the 120,000 voting stations had to delay voting until Sunday. Yet most voters tenaciously refused to give up on the election.

In a slum district on the outskirts of the capital, Abuja, hundreds of voters lined up in lengthy and relatively orderly queues, just metres from the site where Boko Haram bombs killed 88 people last year.

The radical Islamist militia has tried to halt the election with threats of violence, and its gunmen attacked at least two voting stations on Saturday, killing people in Gombe and Yobe states in northeastern Nigeria, reports said.

In the attack on Gombe, the insurgents reportedly shouted: "Didn't we warn you about staying away from the election?"

The election is expected to be a tight race between Mr. Jonathan, a Christian from southern Nigeria, and Mr. Buhari, a retired general and Muslim from northern Nigeria who led a military regime in the 1980s after a coup.

In the Nyanya neighborhood of Abuja, devastated by two bombing attacks by Boko Haram last year, one voter predicted that Mr. Buhari will win the election because of widespread anger at corruption and unemployment. "We need change," said the voter, 35-year-old Abdullahi Isah Bani, who was born in Bauchi state in northern Nigeria. "We are suffering in this country – abject poverty, corruption is everywhere. We've had electricity problems for 16 years. We pay big money and we don't see light."

But others in Nyanya said they were voting for Mr. Jonathan because he has boosted the country's roads, railways and airports. "We'll be in safer hands with him," said Jane Chika Ezeanya, a 32-year-old human resources administrator. "He's trying his best to make things better."

At a voting station in central Abuja, clergyman David Oseghale said he was worried about possible violence and reprisals by opposition supporters against ethnic minorities after the election. As a member of the Bini minority in the south, he said he feels threatened. "It creates some tension," he said. "It could be terrible for weeks."

Analysts and diplomats have voiced concern that the losing party might not accept the results, triggering violence from supporters who feel cheated. Nigeria has a long history of political violence, not just in regions where Boko Haram operates but also in the south, including the Niger Delta, where other militant groups are active. But the main election candidates have repeatedly pledged that their supporters will be peaceful.

Many voting stations on Saturday were plagued by technical problems. Electronic readers, designed to check fingerprints and scan voting cards, often did not work. Voters queued in the hot sun for many hours as they waited for new card readers to arrive.

At one station in Abuja, many voters had arrived at 6 a.m. to join the first queues, and by 11 a.m. they were still waiting to be accredited. Even after the accreditation, they would have to return in the afternoon for the actual voting, which is a separate process.

Mr. Buhari was accredited within minutes by a card-reading machine at his home town of Daura in Katsina state. But in an embarrassing turn of events, the card readers failed to identify the fingerprints of Mr. Jonathan, and the president was forced to wait about 45 minutes at a voting station in his home village of Otuoke in Bayelsa state. He was eventually accredited manually.

Mr. Jonathan, speaking to the media after his long wait, said he could "endure" the "hitches" in the process. "Wait patiently," Mr. Jonathan advised the voters. "There are maybe issues. President Jonathan is just one voter. I am not worried…. All I want is to make the election credible."

U.S. assistant secretary of state Linda Thomas-Greenfield, an observer at the election, said the glitches were to be expected with the new technology. "I'm impressed by the people who are voting," she told The Globe and Mail as she visited a voting station and chatted with voters in the queues.

"They're extraordinarily patient…. I have to say that I've never seen a line like this in the United States, with people standing in line for hours to be verified and yet they're still continuing to stand in line. If this is a sign of what's happening nationwide, I think this is a really good sign."

She also praised the Nigerian police for maintaining peace at the voting stations. "They have shown a lot of calm, they're very restrained, they're very orderly."

The United States and other Western countries, including Canada, have been closely monitoring the Nigerian election and urging all politicians to conduct a peaceful and fair election. The Nigerian vote is seen as crucial to the fate of democracy in Africa, where many rulers are maneuvering to extend their power without free elections. 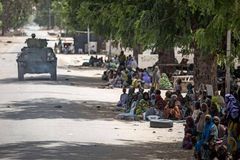 In one Nigerian town, tensions boil over after waiting 12 hours to vote
March 28, 2015
Nigeria steers Africa further along the path of true democracy
March 27, 2015 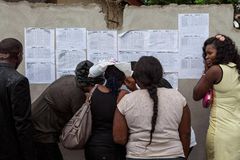 Money poised to be kingmaker in Nigeria election
March 27, 2015 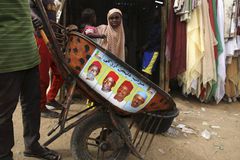