North Korea has agreed to discuss denuclearization, providing a major opening toward peace in one of the world's most tense regions, and laying the foundation for a meeting between supreme leader Kim Jong-un and South Korean President Moon Jae-in in late April.

Few in the international community had expected Mr. Kim to be willing to place his hard-won nuclear advances on the table.

But South Korea said the leader of the isolated regime had agreed to just that during two days of talks in Pyongyang with a high-ranking delegation from Seoul, which arrived in the North Korean capital on Monday and held a four-hour dinner with Mr. Kim, the first of its kind with the country's third-generation leader.

But on Tuesday, South Korea confirmed that Mr. Kim is willing to hold "candid" talks with the United States, including discussions on the subject of laying down its nuclear arms, and is willing to suspend all military and nuclear tests while talks are ongoing, Chung Eui-yong, the top security adviser to Mr. Moon, said Tuesday.

"The North side clearly affirmed its commitment to the denuclearization of the Korean peninsula and said it would have no reason to possess nuclear weapons should the safety of its regime be guaranteed and military threats against North Korea removed," said Mr. Chung, who was part of the delegation to Pyongyang.

North and South Korea have also agreed to a meeting between their top leaders in late April, Mr. Chung said.

They "have agreed to set up a hotline between their leaders to allow close consultations and a reduction of military tension, while also agreeing to hold the first phone conversation" between the two, Mr. Chung said, in comments reported by the Yonhap news agency.

Such a meeting would only be the third leaders' meeting since the Korean War between the two countries, who are technically still at war and split apart by a military demarcation line.

"Possible progress being made in talks with North Korea. For the first time in many years, a serious effort is being made by all parties concerned," U.S. President Donald Trump tweeted after the flurry of news from South Korea. "The World is watching and waiting! May be false hope, but the U.S. is ready to go hard in either direction!"

North Korea has in the past agreed to shelve its nuclear program in exchange for aid and the provision of technology from abroad, although such agreements have always foundered amid mutual recriminations, with both sides accusing the other of abrogating their duties.

Mr. Kim, however, has achieved far more sophistication in his weapons program than either his father or grandfather, testing what is believed to be a hydrogen bomb and firing intercontinental ballistic missiles that appear to have sufficient range to reach New York and Washington.

At the same time, the Donald Trump White House has led a global push to impose biting economic sanctions on North Korea, while issuing sufficiently numerous threats of war that North Korea "realized that they have a new situation, and a person in the White House who can really start shooting," said Andrei Lankov, an expert on North Korea at Kookmin University in Seoul.

Mr. Trump's "rhetoric so far has worked," Prof. Lankov said, although he also warned that U.S. belligerence could still "produce a disaster on a scale we have not seen for half a century."

Mr. Kim's demand that "the safety of its regime be guaranteed and military threats against North Korea removed" is a long-standing stipulation for Pyongyang, which has long decried the U.S. military presence on the Korean peninsula and its regular joint military exercises with South Korea.

Seoul suspended the most recent set of those exercises ahead of the Pyeongchang Olympics. North Korea, too, has not conducted a missile or nuclear test since last November.

The idea of a "freeze for a freeze" has been advocated by China, but rejected by the United States, a key ally of South Korea. The U.S. has a significant buildup of troops in South Korea and little trust exists between Washington and Pyongyang.

Indeed, an analysis of satellite imagery published Monday says that North Korea appears to have restarted a nuclear reactor it uses to make bomb material.

"If the reactor is operating again, as the evidence suggests, it means North Korea has resumed production of plutonium, presumably for its nuclear weapons program," wrote analysts for 38north.org.

That may not, however, pose much of an obstacle to talks. North Korea can argue that its current nuclear activities are being conducted before any moratorium has been concluded, said Choi Kang, director of the Centre for Foreign Policy and National Security at South Korea's Asan Institute for Policy Studies.

Once such a deal is struck, "then they can stop" producing plutonium, he said.

The North Korean willingness to allow discussion of denuclearization is a major step.

Washington wants "a real clear statement from North Korea about denuclearization," Mr. Choi said. That was the "critical litmus test" for the South Korean delegation's visit to Pyongyang.

The prospect of talks between Pyongyang and both Seoul and Washington is a ringing validation of Mr. Moon's attempt to leverage the Pyeongchang Games as a "Peace Olympics." In inviting North Korean athletes to compete, he and the International Olympic Committee also provided an opening for a high-level political delegation to come south, including Kim Yo-jong, the sister of Mr. Kim.

The leaders summit is, however, expected to take place at Panmunjom, a heavily militarized point along the so-called demilitarized zone near Seoul that is frequently used for talks between the two sides.

History suggests talks will be difficult, and any agreement will be equally tough to maintain – although the prospect of warmer Korean relations comes as a relief in Asia and around the world, after a dramatic escalation in tensions over the past year raised fears of devastating conflict.

There remains the prospect for things to "get nasty very fast," warned Cheng Xiaohe, an international politics scholar at Renmin University in Beijing. "If the U.S. continues its tough stance on North Korea," he said, "it will lead to huge failures."

But the situation is urgent. "We've never seen this kind of atmosphere before," he said.

With reports by Alexandra Li and Associated Press

In photos: Views from behind the curtain in North Korea
February 13, 2018 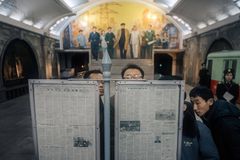 Trump suggests U.S. will meet with North Korea
March 4, 2018
Seoul envoys, Kim Jong-un have 'openhearted talk'
March 5, 2018
Follow Nathan VanderKlippe on Twitter @nvanderklippe
Report an error Editorial code of conduct
Due to technical reasons, we have temporarily removed commenting from our articles. We hope to have this fixed soon. Thank you for your patience. If you are looking to give feedback on our new site, please send it along to feedback@globeandmail.com. If you want to write a letter to the editor, please forward to letters@globeandmail.com.
Comments are closed