There's wistfulness in the young man's eyes, a longing for home as he walks purposefully along the edge of a lake that looks to be somewhere in Central Europe. But he doesn't dress like the locals. Even thousands of kilometres away from the place of his birth, the young man proudly wears a collarless grey Mao suit and military-style greatcoat, the favoured attire of his grandfather, Kim Il-sung.

The young man in the portrait – which was photographed hanging in a museum by a sharp-eyed Canadian tourist to North Korea – bears a striking resemblance to Kim Jong-un, the twenty-something youngest son of Kim Jong-il and the recently named heir to power in the Hermit Kingdom.

If it is him, and a majority of the experts consulted by The Globe and Mail believe that it is, the portrait marks the first glimpse anyone outside North Korea has had of how the regime will sell Kim Jong-un to a people conditioned to believe his father is their infallible Dear Leader and his grandfather, Kim Il-sung, an immortal who remains president despite his death in 1994.

It would be laughable, perhaps, if the new propaganda campaign weren't accompanied by new military recklessness – including last month's deadly shelling of a South Korean island – intended to give Kim Jong-un, already praised as "the Young General," victories to claim as his own.

Out of half a dozen North Korea scholars who were sent a copy of the portrait, only one disagreed that the subject was likely Kim Jong-un. The other experts saw it as the launch of a massive propaganda campaign that will attempt to portray the heir apparent as having been sent abroad to learn foreign ways and technologies, while always keeping North Korea and its people in his heart.

Several who saw the portrait noted the physical resemblance (though the heir apparent is much flabbier in recent television footage), as well as a background that looks to be Interlaken, Switzerland, where Kim Jong-un is known to have spent time while studying at the International School of Berne in the late 1990s.

"It's big news," said Brian Myers, an expert on North Korea at Dongseo University in South Korea. "It's hard to be completely certain on the basis of an untitled image alone. … But I cannot imagine a schoolboy outside the Kim family meriting this kind of painting, and it is very similar in mood and layout to depictions of the young Kim Il-sung and the young Kim Jong-il. So I would assume that it is Kim Jong-un although it is not a particularly striking likeness in view of the Kim Jong-un we have seen photographed in the past few months."

The previously unseen portrait was photographed by Toronto lawyer Percy Toop, who said he saw it hanging in the Rajin Art Gallery in Rason region in the northeastern corner of the country. The gallery is usually closed to the public, but was opened by special request for Mr. Toop and a small group of other tourists when they visited North Korea in late October.

The youngest Mr. Kim, who is believed to be either 26 or 27 years old, was introduced at a massive military parade in Pyongyang in October where he stood on the reviewing stand alongside his father, marking him in public as the designated successor. He was also made a four-star general and named to the Central Committee of the ruling Workers' Party.

However, North Korea's skilled propagandists have a problem. Unlike his grandfather, who commanded a guerrilla unit that fought against the Japanese during the Second World War (before he was chosen by Joseph Stalin to head the communist-controlled north of the peninsula when it was divided after the war) and his father, who had a long apprenticeship before inheriting power, Kim Jong-un has almost no political or military experience, and spent his formative years studying in Switzerland. While he was abroad, a man-made famine swept North Korea killing as many as three million people while the Young General was presumably eating quite well in Interlaken and Berne.

The portrait appears to be the start of an effort to turn that potential liability into in asset. "It goes to the heart of what will be the regime's main problem in glorifying the boy, namely the fact that he was overseas during at least part of the famine or [so-called]Arduous March. The regime is for some reason loath to let foreigners see this nascent personality cult," Prof. Myers said. "We have seen footage of [Kim Jong-un] and of course we can see him on the TV news every few days … but we know next to nothing about how the regime is articulating his biography. This painting offers important insight into what kind of mythobiography the regime is either planning or is already teaching the masses in party meetings, study meetings etc. outside the view of foreign visitors."

He noted that the young man in the painting was gazing at the sun rising in the east, another suggestion that North Korea consumed his thoughts, even while he was far from home.

Besides the portrait, there have been reports that North Koreans have been forced to learn a song praising the Young General. Some 10 million official portraits are said to have been prepared so that photos of Kim Jong-un can be hung alongside those of his father and grandfather in every home and office in the country.

Mythmaking is a long-time specialty of the North Korean regime, and crucial to the personality cult created around the leader. Citizens are taught that Kim Jong-il (whom most academics believe was actually born in the Soviet Union) was born at the foot of Korea's sacred Mount Baekdu. The moment, allegedly, was foretold by a swallow and heralded by the appearance of a double rainbow and a new star in the sky. Kim Il-sung, meanwhile, has been made into a deity, and on paper is still the country's president and "eternal leader" 16 years after his death.

The myths need to be created much faster this time. Kim Jong-il has looked thinner and weaker since he suffered a suspected stroke in 2008. The Dear Leader's failing health is believed to have accelerated plans to groom Kim Jong-un as his successor.

"It will start with pictures likes this, TV documentaries, poems and some writings and then, the next breakthrough point, he'll appear on a lapel badge with his dad we assume," said Paul French, author of North Korea: the Paranoid Peninsula, referring to the lapel pins of Kim Il-sung and Kim Jong-il that all North Koreans are forced to wear.

Mr. French said it was surprising the regime has decided to deal head on with Kim Jong-un's foreign education. "The next great theorizer of Juche theory strides out to soak up foreign culture for the good of the people," he joked after viewing an e-mailed copy of the portrait. "Of course, I doubt very much if he strolled around Switzerland dressed quite so revolutionary, though the coat and hat are reminiscent of the 2009 Banana Republic collection."

There is, however, some debate among Pyongyang-watchers over whether the picture is important. Andrei Lankov, a respected North Korea expert at Kookmin University in Seoul, scoffed at the notion that this was the new boy's coming-out portrait. "This is his grandfather. Generalissimo Kim Il-sung. The background and school uniform leaves no doubt about it: the late 1920s," Prof. Lankov wrote in an e-mail after seeing a copy of the portrait.

Kim Jong-un's likeness to a young Kim Il-sung is uncanny to the point that some have speculated Kim Jong-un may have undergone plastic surgery to accentuate the similarities and cement the link between himself and his supposedly immortal grandfather. Prof. Lankov also said the houses in the painting's background looked more like traditional Korean homes than anywhere in Switzerland.

However, that opinion is, thus far, a minority one among those who have viewed the portrait. Mr. Toop, for one, said he knew he was looking at something different as soon as he laid eyes on the picture on the wall of Rajin Art Gallery.

Tourists in North Korea are shown hundreds of portraits, busts and statues of Kim Jong-il and Kim Il-sung over the course of their stay, so it's unsurprising that something new would jump out after several days in the country. "I identified the portrait as Kim Jong-un when I first saw it," the 54-year-old Mr. Toop said. "To my knowledge, neither Kim Il-sung nor Kim Jong-il can be situated in a Western backdrop like this at any time in their youth." 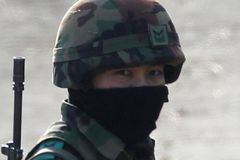 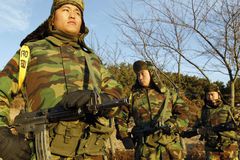