They were four aggrieved American mothers who said they were shocked when they found out that the Nutella they were spreading on their kids' bread was a confection that packed twice as much sugar as a similar amount of jam or syrup.

Now, the makers of the popular hazelnut-flavoured spread have agreed to a $3-million settlement to end four class-action suits filed in the United States that claimed that Nutella engaged in misleading marketing to portray its product as a healthy part of breakfast.

The women alleged they and other consumers were duped by Nutella television ads, which used words like "nutritious" and "healthy," and by the company's website, which quoted a nutritionist.

They also noted that in 2008 a British advertising watchdog had determined that Nutella's manufacturers ran similarly misleading ad campaigns in the United Kingdom.

The settlement, which was reached earlier this spring, will be reviewed before approval at court hearings in California and New Jersey in July.

Eligible consumers can submit a claim for $4 per jar purchase, up to a maximum of $20.

The Nutella website, for example, will no longer say that the product contains "quality ingredients" and it no longer says that Nutella on whole-wheat bread with orange juice and skim milk "is a good combination for a balanced breakfast."

"Nutella contains over 55 per cent processed sugar, the consumption of which has been shown to cause type 2 diabetes and other serious health problems. Indeed, the serving size, 2 tablespoons, contains 200 calories, 11 grams of fat – 3.5 of which are saturated fat (18 per cent of your daily recommended value) – and 21 grams of sugar," says one of the lawsuits, filed by Alabama resident Marnie Glover.

Ms. Glover's lawsuit says that she wasn't aware that Nutella's ads were deceptive until January 2011.

A month before, Athena Hohenberg, a San Diego-area mother of a four-year-old, says she found out from friends what was in Nutella.

"She was shocked to learn that Nutella was in fact not a 'healthy, nutritious' food but instead was the next best thing to a candy bar," her lawsuit said.

The suits zeroed in on Connie Evers, described in court filings as a registered dietician and "purported children's nutrition expert."

A consultant for Nutella, she was alleged to be the source of the product's nutritional claims. She also appears on the Nutella American website, arguing that the spread is a way to get children to eat milk and whole-grain bread.

"With the unique taste of Nutella, kids may think they are eating a treat for breakfast, while moms are helping nourish their children with whole grains," Ms. Evers is quoted as saying on the website.

One court document alleged that, as recently as April 2011, two months after the lawsuits were first filed, Ms. Evers was giving a presentation in Orange County, "telling California mothers to feed Nutella to their children for breakfast."

The lawsuits included examples of what it deemed to be misleading televised and print ads.

"As a mom I'm a great believer in Nutella as part of a nutritious breakfast," a woman in one TV spot says.

The words "Preservatives" and "Artificial Colors" appear and then are crossed out on the screen.

Ms. Hohenberg's complaint says she trusted labels on Nutella jars, which claim that the spread is "an example of a tasty yet balanced breakfast."

Ms. Hohenberg "is not a nutritionist, food expert, or food scientist," her complaint says.

Ms. Glover's complaint says she is "a lay consumer who did not possess the specialized knowledge Ferrero had which otherwise would have enabled [her] to see through Defendant's deceptive marketing."

It alleged that Ms. Glover paid more for Nutella than for other similar spreads because she had been hoodwinked by the company's advertising.

"Plaintiff does not read scholarly publications or other materials describing the negative impact of consuming foods high in saturated fat and refined sugars."

Nutella CEO Bernard Kreilmann was questioned by lawyers for the California plaintiffs and the company had to produce more than 1,200 pages of internal documents.

Afterward, the both sides submitted to a confidentiality order enabling Nutella to keep some documents private to protect its trade secrets.

By the fall, the two sides agreed to enter a mediation process before a retired judge and reached the $3-million out-of-court settlement. 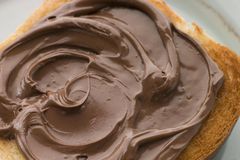