President Barack Obama announced Tuesday that the U.S. will slow its military withdrawal from Afghanistan, maintaining 9,800 troops in the country through the end of 2015 instead of cutting the number by about half as originally planned.

"Afghanistan remains a very dangerous place," Obama said in explaining his decision at a press conference after Afghan President Ashraf Ghani's first visit to the White House since his election six months ago. Obama added that the size of the U.S. troop presence for 2016 will be decided later this year.

Ghani had asked Obama to slow the withdrawal because Afghan security forces are bracing for a tough spring fighting season and are also contending with Islamic State fighters looking to recruit on their soil.

Obama said he still intends to complete the drawdown by the end of 2016 and that the U.S. transition out of a combat role has not changed.

"We want to make sure we're doing everything we can to help Afghan security forces succeed so we don't have to go back," Obama said. He said he and the U.S. commanders in Afghanistan have concluded the extra time in the country "is well worth it."

Ghani thanked American servicemen and women and civilian contractors. "I'd also like to thank the American taxpayer for his and her hard-earned dollars," he said.

"Tragedy brought us together; interests now unite us," Ghani said.

He said the slower U.S. troop withdrawal "will be used to accelerate reforms, to ensure that the Afghan National Security Forces are much better led, equipped, trained and are focused on their fundamental mission. He added that he was pleased to say that "the departure of 120,000 international troops has not brought about the security gap or collapse that was often anticipated."

In Washington this week, Ghani is making his case that he's a reliable partner worthy of American support, despite his fractured government and a litany of problems still rampant in Afghanistan's military — illiteracy, drug abuse and desertions, to name a few.

For Obama, Ghani represents the last, best hope to make good on the president's promise to end America's longest war by the time he leaves office, keeping just a thousand or so troops at the embassy to co-ordinate security. Ghani predecessor Hamid Karzai's relationship with the White House was increasingly dysfunctional, and if the dealings with Ghani don't turn out better, Obama risks leaving Afghanistan still vulnerable to the kinds of violent extremist groups that operated with impunity until 14 years ago, when the U.S. attacked after the Sept. 11,2001 terror strikes against the U.S..

Also at stake: the future of U.S. bases in Jalalabad and in Kandahar, where the Taliban had their capital until 2001. U.S. military leaders have seemed receptive to Ghani's request that those bases stay open as long as possible.

Drawing a contrast with his predecessor, Ghani has taken pains on his U.S. visit to display gratitude for U.S. sacrifices in Afghanistan that the White House found lacking from Karzai. He began his trip by explicitly thanking the U.S. for its support. And on Tuesday morning, Ghani joined Defence Secretary Ash Carter and Vice-President Joe Biden in laying a wreath at the Tomb of the Unknowns at Arlington National Cemetery.

Further underscoring the fragile security situation, gunmen killed at least 13 people overnight during a midnight assault on a highway near Taliban-held territory in eastern Afghanistan, although no group immediately claimed responsibility. And elsewhere in Afghanistan, a suspected U.S. drone strike near the border with Pakistan killed at least nine militants from a Pakistani terror group, intelligence officials in Pakistan said. 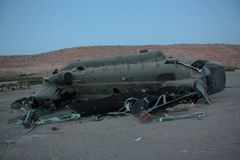 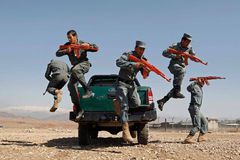 Gunmen in Afghanistan open fire on highway, killing at least 13 people: official
March 24, 2015
Report an error
Due to technical reasons, we have temporarily removed commenting from our articles. We hope to have this fixed soon. Thank you for your patience. If you are looking to give feedback on our new site, please send it along to feedback@globeandmail.com. If you want to write a letter to the editor, please forward to letters@globeandmail.com.
Comments