If the U.S. Supreme Court strikes down Barack Obama's health-care law, Mitt Romney might not be the only adversary the President will be running against this fall. He could also end up campaigning against right-wing judges and their perceived political bias.

With the court set to rule Thursday on the constitutionality of Mr. Obama's signature legislative achievement, the White House is bracing for a decision that invalidates part or all of the health-care law. Legal analysts agree the tea leaves do not favour the President.

Conservatives have decried the law's so-called individual mandate – the requirement that all Americans without health insurance purchase coverage – as a violation of individual freedom. And during oral arguments in March, a majority of judges seemed to agree.

To be sure, the court could surprise everyone. Chief Justice John Roberts, appointed by George W. Bush in 2005, did that by siding with liberal stalwarts on the top bench this week to strike down most of Arizona's controversial law targeting illegal immigrants.

That ruling was largely a victory for the Obama administration, cementing the federal government's preponderance in immigration matters. It dealt a blow to "states' rights" advocates, a group the court's conservative wing has tended to privilege in recent years.

The Arizona decision, which was moderate in tone, could insulate Judge Roberts against charges of political bias if he dons his conservative robes to gut the health-care law. But it will not be enough to spare him from an avalanche of recrimination.

"Ultimately, I'm confident that the Supreme Court will not take what would be an unprecedented, extraordinary step of overturning a law that was passed by a strong majority of a democratically elected Congress," Mr. Obama said in April. "And I'd just remind conservative commentators that for years what we've heard is [that] the biggest problem on the bench was judicial activism or a lack of judicial restraint – that an unelected group of people would somehow overturn a duly constituted and passed law."

The President, who lectured in constitutional law and likes to show off his knowledge, took heat from legal scholars for that warning volley. It bordered on interference in the affairs of an independent, third branch of government. But it was not the first time Mr. Obama expressed his displeasure toward the Roberts court.

In his 2010 State of the Union speech, the President sent jaws dropping by railing against the Supreme Court's move to strike down a ban on corporate and union spending in federal political campaigns, on the grounds that it violated such entities' free speech.

The court, Mr. Obama said in referring to the so-called Citizens United decision, "reversed a century of law to open the floodgates for special interests – including foreign companies – to spend without limit in our elections."

Like most of the Roberts court's controversial moves, Citizens United was a 5-to-4 verdict that underscored the ideological divide on the bench. Judge Roberts was joined by Justices Antonin Scalia, Clarence Thomas, Samuel Alito and Anthony Kennedy.

Judge Kennedy is considered the court's swing vote, mostly siding with the four conservatives, and occasionally with the four liberal justices, to determine which side wins. If the past is any guide, his vote will decide the outcome of the health-care case.

Since the court freed companies and wealthy individuals to contribute without limit to so-called Super PACs, those working to elect Republicans have exponentially outraised pro-Democratic ones.

If Judge Kennedy sides with the conservatives to effectively neuter Mr. Obama's health-care law, the Democratic base will be clamouring for the President to take it to the court on the campaign trail. And he is likely to oblige them.

Franklin Roosevelt – after Lincoln, the leader Mr. Obama most wants to emulate – declared war on an obstructionist court and it was political gold. Could Mr. Obama win at that game, too?

"The American people understand that we're not going to make progress by going backwards … They understand we don't need to refight this battle over health care," Mr. Obama said at a campaign stop in Atlanta on Tuesday. "It's the right thing to do to give 30-million Americans health insurance that didn't have it before."

Running against the court, however, has as many risks as rewards. One reward is that denouncing the perceived politicization of the Roberts court energizes Democratic supporters.

Though he has already appointed two justices to the court, there is little chance that Mr. Obama will have an opportunity to replace the current conservative majority before he leaves office. But Democrats are terrified that a Romney presidency would leave the court in conservative hands for at least another generation. That is because the judge most likely to retire next is 79-year-old Ruth Bader Ginsberg, a staunch liberal.

The risk Mr. Obama runs in publicly attacking the Roberts court, however, is that his health-care law is widely unpopular. Polls show that a strong majority of Americans want the court to strike down all or part of it.

They will find out on Thursday whether their wish, and Mr. Obama's nightmare, comes true. 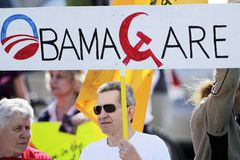 U.S. Supreme Court holds Obamacare's future in its hands
May 3, 2018
Follow Konrad Yakabuski on Twitter @konradyakabuski
Report an error Editorial code of conduct
Due to technical reasons, we have temporarily removed commenting from our articles. We hope to have this fixed soon. Thank you for your patience. If you are looking to give feedback on our new site, please send it along to feedback@globeandmail.com. If you want to write a letter to the editor, please forward to letters@globeandmail.com.
Comments