It was only by finally freeing his inner liberal and suppressing his pragmatic streak that Barack Obama was able to make history by steering through Congress the most consequential and progressive U.S. social legislation in more than four decades.

The passage by the House of Representatives of Mr. Obama's $940-billion (U.S.) overhaul of the health-care system ranks with the 1935 creation of Social Security and the 1965 advent of Medicare as a milestone that will change the face and character of this country.

Presidents since Harry Truman have aspired to put the United States on the path to universal health insurance for all of its citizens, only to be out-manoeuvred by lobbyists and politicians who exploited Americans' innate suspicion of government to win the day.

That Mr. Obama got farther than all of them - farther than Kennedy, Nixon, Ford or Clinton - assures him of a legacy that only weeks ago seemed in doubt. It also infuses his presidency with a burst of renewed potential to build on.

For that, Mr. Obama owes a debt of gratitude to House Speaker Nancy Pelosi, the only member of the Democratic leadership not to waver during the tortuous year-long road to health-care reform.

After Republican Scott Brown's victory two months ago in the Massachusetts Senate race, the White House agonized about its agenda. The administration seriously considered retreating on health care.

Thus began the dog days of Mr. Obama's presidency as the White House settled in for a winter of self-doubt and dejection. The man who was elected by a majority of Americans to make history suddenly risked becoming a casualty of it.

Having cultivated duelling personas - the first a post-partisan pragmatist, the second a principled liberal warrior - the President had failed to convincingly inhabit the skin of either of them.

But Ms. Pelosi, the indomitable 69-year-old who has emerged as one of the most powerful speakers ever, was not for turning. Liberal Democrats like her had fought their whole lives for health-care reform and she was not prepared to see this chance slip away.

"We will go through the gate," she vowed in late January. "If the gate is closed, we will go over the fence. If the fence is too high, we will pole vault in. If that doesn't work, we will parachute in. But we are going to get health-care reform passed."

Over the advice of his chief of staff, Rahm Emanuel, who advocated retrenchment and a scaled down version of reform, Mr. Obama chose to embrace Ms. Pelosi's vision. He finally unleashed his liberal convictions and began sounding like the "hope-and-change" candidate Americans voted for.

"From the start of his presidency, Mr. Obama and his team have been torn between two strategies," New York University politics professor Patrick Egan said in an interview. "But in the past few weeks, we have seen him abandon the cool, rational approach for one that is partisan and ideological and focused on doing what needs to be done to do something big that happens only once in a generation in American politics."

In making his final plea to wavering Democratic congressmen to get behind his plan, Mr. Obama on Saturday characterized the legislation before the House as running "straight down the centre of American political thought."

There may have been a time, when Democrats and Republicans alike converged in the middle, when a statement like that would have been true. But since Ronald Reagan, it has not been. And no one is more acutely aware of that than Mr. Obama himself.

"The health-care struggle suggests that Obama views changing that trajectory as the ultimate measure of a presidency's success. His aim is to establish a long-term political direction - one centred on a more activist government that shapes and polices the market to strengthen the foundation for sustainable broadly shared growth," Mr. Brownstein asserted. "Everything else - the legislative tactics, even most individual policies - are negotiable."

If this is at all true, Republican depictions of the reforms as a "government takeover" of the U.S. health-care system will inform the political debate about the true meaning of 'ObamaCare' for months, if not years, to come.

"Will we choose to uphold the sacred motto 'We the People' or return to the chains and slavery of government and choose 'We the Subjects'?" Republican Ted Poe, of Texas, asked during the House debate preceding last night's vote. "The American people don't desire more oppressive, intrusive government in charge of their health."

For months, the political zeitgeist has seemed reflective of that hyperbolic Republican point of view. The Tea Party movement has sucked up so much air time and so coloured political discourse that Democrats risked political hara-kiri by proceeding with health-care reform.

But there is another view. It could be that Republicans have misread the public mood. The nastiness and intensity of their attacks could backfire, if not wear on the nerves of the silent majority Americans.

As former Clinton press secretary Dee Dee Myers noted recently in Politico, "Obama maintains a reservoir of goodwill. Even people who don't approve of the job he's doing like him personally. Most think he understands their problems and cares about people like them."

Couple that with the portrayals of Mr. Obama that will come - once health-care reform is signed, sealed and delivered - as an agent of change Americans can believe in again, and this President's legacy could yet rival Mr. Reagan's. 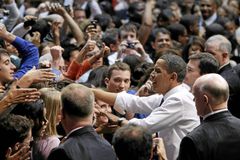