Resorting to the time-honoured tactic of irked superpowers, U.S. President Barack Obama sent a gunboat - in this case, a nuclear aircraft carrier - to rattle a sabre off the coast of North Korea.

The secretive communist state, itself a nuclear power, poses a "serious and ongoing threat that has to be dealt with," Mr. Obama warned Wednesday in his first public comments about the most recent clash on the tense Korean peninsula.

Mr. Obama's response echoed his tough talk from last summer, when he sent the same carrier, the USS George Washington, to the region after a North Korean submarine sank a South Korean corvette, killing 40 sailors.

"We are rallying the international community, once again, to put pressure on North Korea," said the President, who is accused by his Republican critics of talking tough but failing to deal effectively with dangerous, violent regimes such as North Korea and Iran.

Pyongyang was unimpressed. It denounced the "reckless military aggression" of South Korea and its allies, bluntly reminding them to "bear in mind the solemn warning of the revolutionary armed forces of [North Korea]that they do not make an empty talk.'' Last summer's show of force, a joint U.S.-South Korean naval armada, played its war games out of sight of the Korean peninsula and, in deference to Chinese sensibilities, stayed out of the Yellow Sea, which Beijing regards as its waters.

This time, the George Washington and its accompanying guided-missile warships will venture up the western coast of the peninsula toward the island battered by North Korean guns, which may anger Beijing. China's communist government is Pyongyang's only ally and props up the North Korean regime and its population of 24 million with massive flows of military and humanitarian aid.

Successive U.S. administrations admit that without Beijing's leverage, there is little the United States can do - short of war - to force Pyongyang to scrap its nuclear-weapons program and stop exporting arms and nuclear-weapons technology to other rogue states.

"It's very important for China to lead. … [The]one country that has influence in Pyongyang is China and so their leadership is absolutely critical," said Admiral Michael Mullen, chairman of the Joint Chiefs of Staff.

But if Mr. Obama is waiting for China's help, he may be cooling his heels for a while.

"There is zero chance of China, either in open or in private, putting major substantive pressure on North Korea," said Shi Yinhong, professor of international relations at Beijing's Renmin University.

China has so far maintained the same sort of even-handed, blame-both-sides attitude that characterized its response to last spring's torpedoing of the corvette. While terrified fishermen were still being ferried from the burning island, Beijing's Foreign Ministry voiced "regret about the loss of lives and property and urged all parties to avoid escalation and restart dialogue."

Attention-getting may suit North Korea, which is in the midst of a potentially destabilizing period while ailing Kim Jong-il attempts to hand power to his 27-year-old, third son, Kim Jong-un, a previously unknown figure who was vaulted to the rank of army general two months ago after the senior Kim made a clandestine visit to Beijing to obtain his patron state's approval.

Some see the shelling of Yeonpyeong as part of a calculated effort to seal the succession. "The leadership could stage military provocations to fan an external threat and distract the elites in Pyongyang while also providing the pretext to purge elements threatening to the regime," said Paul Stares, director of the Center for Preventive Action at the Council on Foreign Relations in an analysis written before the latest attack.

Others believe North Korea is testing the U.S. President.

Mr. Obama, rejecting the confrontational style of his predecessor George W. Bush, came to the White House promising to offer the option of negotiations to rogue states, such as North Korea and Iran, which, together with pre-Saddam Iraq, Mr. Bush had dubbed the "axis of evil."

To date, both Pyongyang and Tehran have spurned Mr. Obama's willingness to de-escalate America's decades-long military standoffs with both states.

The administration is seeking to temper its response to the Yeonpyong incident, suggesting the North Korean attack was a provocation to be managed, not the prelude to new hostilities on the last front line of Cold War.

"This was in our view a one-off, premeditated act," said State Department spokesman P.J. Crowley. "We don't see that North Korea is preparing for an extended military confrontation. That's what makes it not a war. It is a violation of the armistice." 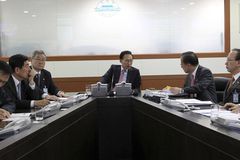 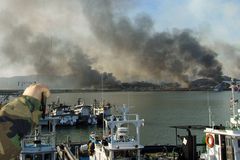 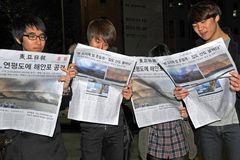