Charging toward an Iran nuclear agreement, President Barack Obama is assuring Arab allies that they are safe from the threat of an empowered Tehran as he seeks to shore up some of America's most critical security partnerships. However, Obama's claim of winning Arab support for his nuclear diplomacy appears far from certain.

After a rare Camp David summit, the president on Thursday pledged Washington's "ironclad commitment" to the Sunni governments of the Persian Gulf and even spoke of authorizing U.S. military force if their security is endangered by Shiite Iran or anyone else. The United States, he vowed, will "use all elements of power to secure our core interests in the Gulf region, and to deter and confront external aggression against our allies and partners."

Obama invoked the start of a "new era of co-operation" that would last for decades to come, even as Saudi Arabia and others in the region are deeply unnerved by the prospect of an accord with Iran that would impose a decade-long freeze on its nuclear program and potentially provide it tens of billions of dollars' worth of relief from international sanctions. The Sunni governments came to Washington looking for assurances that Obama would pair his diplomatic effort with a broader strategy to push back against Iran's expanding influence in the Middle East.

The U.S. and other world powers hope to clinch a final nuclear deal with Iran by the end of June. This week's talks with top officials from the kingdoms of Bahrain, Kuwait, Oman, Qatar, Saudi Arabia and the United Arab Emirates were announced by Obama on April 2, when a framework with the Iranians was sealed.

Washington has long provided military support to its Gulf partners, most famously by invading Iraq in 1991 after its takeover of Kuwait. But like another U.S. ally, Israel, the Arabs fear a negotiated end to the Iran nuclear standoff would serve to enrich and empower a government already keeping Syrian President Bashar Assad in power, fueling Yemen's rebellion, intimidating opponents in Iraq and Lebanon and meddling in the affairs of others through the region.

Obama on Thursday pledged to take their partnership to another level with greater co-operation on everything from ballistic missile defence, maritime security and cybersecurity to joint military exercises and training. Counterterrorism co-ordination will tighten to stem the flow of foreign fighters to terrorist groups, protect vulnerable infrastructure and halt terror financing, he said. In a joint statement, the countries vowed to address regional challenges including Syria, Iraq, Yemen and Libya.

The sensitivities of the Arabs, and Israel for that matter, are part of the compendium of challenges facing Obama as he tries to finalize an agreement he believes could stabilize a part of the world beset by terrorism, sectarian rivalry and weak governance — and which would be his crowning foreign policy achievement.

Obama's biggest test may come from home. Congress on Thursday sent Obama a bill enabling lawmakers to hold an up-or-down vote on an Iran deal, after House Republicans and Democrats overwhelmingly approved the measure. The vote was 400-25; the Senate voted in favour 98-1 last week. Obama will sign it into law, White House press secretary Josh Earnest said.

At the summit-closing news conference, Obama said Gulf leaders hadn't been asked to "sign on the bottom line" to approve a work in process. They agreed, he said, "that a comprehensive, verifiable solution that fully addresses the regional and international concerns about Iran's nuclear program is in the security interests of the international community, including our GCC partners."

Saudi Foreign Minister Adel al-Jubeir, one of the attendees, was more circumspect.

Arab leaders were "assured that the objective is to deny Iran the ability to obtain a nuclear weapon," al-Jubeir said, but he added: "It would be too early to prejudge what we accept, what we don't accept."

Obama rarely uses Camp David for personal or official business and White House aides hoped the more intimate setting would foster candid conversation. But just two other heads of state — the emirs of Qatar and Kuwait — attended. The others sent lower-level, though still influential, representatives.

The most embarrassing absence, for the U.S., was Bahrain's King Hamad bin Isa Al Khalifa. He rejected the summit for a horse show in Britain and meeting with Queen Elizabeth II.

The White House and Saudi officials insisted the king was not snubbing Obama. But there are indisputable strains in the relationship, driven not only by Obama's Iran overtures but also the rise of Islamic State militants and a lessening U.S. dependency on Saudi oil.

For months, the U.S. has been trying to build Arab support for the nuclear deal. Secretary of State John Kerry, Energy Secretary Ernest Moniz, State Department nuclear negotiator Wendy Sherman, and the Treasury Department's sanctions point-man Adam Szubin delivered a full-court press to Gulf foreign ministers in Paris last week, hoping to convince them all pathways to a bomb would be cut off and that sanctions could be quickly re-imposed if Iran cheats.

With Tehran set to reap significant economic relief, the Saudis and others are pointing to Yemen's civil war as a possible unintended consequence of a deal. They accuse Iran of backing and even directing the Houthi rebels who've taken over much of Yemen, and say greater financial power would enable Tehran to sow greater chaos in the region.

Gulf States summit a test of relations between U.S. and Saudi Arabia
May 13, 2015 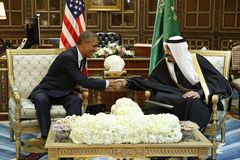 Along with Saudi king, most Gulf rulers also skipping Gulf summit in U.S.
May 11, 2015 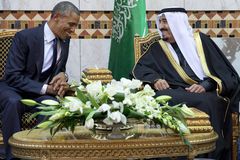