The Republic Day parade in New Delhi every Jan. 26 is uniquely Indian.

Each year, the government has invited a world leader as "chief guest" to witness a grand display of hard and soft power. Missiles and other military hardware co-exist with colourful floats celebrating regional heritage. Thousands of soldiers march in a procession that also includes mild-mannered public servants.

The choice of chief guest is carefully considered as it is meant as a statement on the country's international orientation. The first invitee was Indonesian President Sukarno in 1950. Queen Elizabeth II attended in 1961, although a British prime minister wasn't invited until 1993. Bhutan and France share the distinction of receiving the most invitations with four each. The president of the Soviet Union was invited twice and Russian President Vladimir Putin attended in 2007.

This year's guest could be the most significant choice yet. Narendra Modi in December surprised the diplomatic establishment in New Delhi by extending his first invitation as Prime Minister to Barack Obama, who is the first U.S. president to get invited.

"It is a very big deal for both sides," said W.P.S. Sidhu, a senior fellow at the Brookings Institution in New Delhi. "This is very important symbolism."

Mr. Obama is scheduled to arrive in New Delhi Sunday, a day ahead of the ceremony, solidifying one of the most significant geopolitical shifts in recent memory. Uneasy acquaintances since the Cold War, the world's oldest democracy and its most populous one suddenly seem the best of friends. A stronger, steadier allegiance between the U.S. and Asia's third-largest economy could have far-reaching implications for everything from poverty reduction to climate change to counterterrorism.

The U.S. and India long have been linked by their democratic traditions, but rarely has that made them close. India's first prime minister, Jawaharlal Nehru, was skeptical of U.S.-style capitalism and Indira Gandhi was a leading force in the non-aligned group of countries in the late 1970s and early 1980s. Diplomatic relations hit a new low after an Indian diplomat was arrested in New York in December, 2013, over her treatment of a domestic servant. There is still a feeling in New Delhi that the Western superpower should be kept at a distance.

Mr. Modi's invitation to Mr. Obama is a striking shift, not least in their personal relations. Mr. Modi was thought to still be bitter that he was refused a U.S. visa in 2005 because of persistent accusations that he had done too little to stem deadly riots in Gujarat during his tenure as the state's chief. But he was welcomed at the White House last September, just four months after his election, and Mr. Obama pushed forward his State of the Union address by a week so he could attend the Republic Day event.

"The change is Mr. Modi himself," said Alyssa Ayres, a former deputy assistant secretary of state for South Asia in the Obama administration who now is a senior fellow at the Council on Foreign Relations. "India sees itself as a great power and previous governments never wanted to be seen as leaning too close to the United States. Modi doesn't have those hang-ups."

The President will be joined by a platoon of executives from U.S. companies such as Boeing and Ford, highlighting the renewed interest of the international business community in Mr. Modi's aggressive campaign to boost economic growth and create jobs by attracting foreign investment. The U.S. side may push for more definitive signs that India truly is open for business, including the loosening of an unusually stringent law that makes investors in nuclear plants fully responsible for any accident. The U.S. could extend an agreement that gives India access to U.S. military technology. The visit might also produce an agreement on clean energy, a White House priority that echoes Mr. Modi's development agenda.

"It is pretty clear that the most investment we could get would come from American corporations," said Neelam Deo, a former Indian diplomat who now is director of Gateway House, a think tank based in Mumbai.

Mr. Modi originally frustrated Washington by reneging on the previous Indian government's pledge to support a WTO pact aimed at reducing paperwork at customs. But within weeks of his visit to the U.S., negotiators settled their differences, clearing the way for the first significant loosening of global trade rules in years.

Mr. Obama and Mr. Modi are both superb orators, and Mr. Modi and his Bharatiya Janata Party borrowed heavily from Mr. Obama's election handbook to win India's first majority government in a generation last year. Indian newspapers say Mr. Obama will be the first foreign leader to dine at Mr. Modi's official residence. Mr. Modi told his 9.6 million Twitter followers on Thursday that Mr. Obama will join him on his monthly radio address in an extraordinary joint broadcast to be aired Tuesday.

Mr. Modi isn't seeking an exclusive relationship with Mr. Obama. Since his election he has sought to bolster ties with his immediate neighbours. He went to Tokyo to see Prime Minister Shinzo Abe and received Australian Prime Minister Tony Abbott and Chinese President Xi Jinping in New Delhi. After visiting the U.S., Mr. Modi hosted Mr. Putin, pledging to maintain a close relationship with the long-standing ally.

India could disappoint Mr. Obama on climate change, as Mr. Modi is more concerned about providing his country with stable electricity, even if that means ramping up the production of coal. India also will be hesitant to drift too close to the U.S. out of fear of unnecessarily antagonizing China. "India doesn't have the luxury of wagging its finger from a great distance," said Mr. Sidhu.

Mr. Obama's interest is to balance China's rising influence in Asia. The World Bank forecast earlier this month that India is on track to surpass China as the world's fastest-growing major economy within a couple of years. And while India needs Chinese investment, it also is wary of Beijing's intentions.

As Mr. Modi and Mr. Xi met last fall, hundreds of Chinese troops crossed into Indian territory at a disputed border point in the northern Ladakh region, forcing a standoff with Indian soldiers and seeding distrust of Beijing's motives in the Modi administration.

Another wild card is Pakistan, the U.S.'s traditional ally in South Asia and India's bitter enemy. Ms. Ayres said Islamabad will dislike the sight of Mr. Obama at the Republic Day parade. Mr. Obama may not care. After visiting Mr. Modi in Gujarat earlier this month, U.S. Secretary of State John Kerry went to Pakistan, where he called on President Nawaz Sharif to crack down equally hard on all terrorist networks operating in the country, including Lashkar-e-Taiba, the group responsible for the deadly attack on Mumbai in 2008. 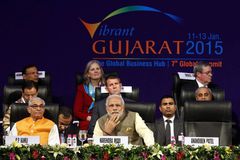