Grant Kippen has done something quite difficult: He has found what may become the highest-pressure job in Afghanistan.

The Ottawa native and veteran of the 2005 Afghan election has the unenviable title of chairman of the country's Electoral Complaints Commission, an independent body charged with ensuring Afghanistan's upcoming elections are free of fraud and other violations.

In a country where 41 people are trying to become president, where some districts are so infiltrated by the Taliban they will probably be eliminated from the election process altogether, and where influence-peddling allegations are already flying a month before the vote, Mr. Kippen is expected to keep the process honest.

He is one of the very few foreigners at the centre of what will be, for the first time since the fall of the Taliban, a truly Afghan-led election.

"There's going to be complaint forms, I think, at just about every polling station in the country," he says over breakfast at a Kabul café popular with Westerners and protected by an armed guard. "The nightmare scenario is we get 28,000 complaints coming in; then we've got to work it all through. But you plan for the worst and hope for the best."

Mr. Kippen, a soft-spoken University of Western Ontario graduate who has previously worked for the United Nations and Elections Canada, has had his life threatened in pursuit of that goal.

During the last Afghan election, his disqualification of a candidate prompted crowds to gather in Kabul and call for his death.

Now he faces what almost certainly will be another tumultuous election period. The ECC has already disqualified 57 people from running, 56 of them because they were found to be members of "unofficial military forces."

On Aug. 20, Afghans will go to the polls to elect a president for the second time since the U.S.-led invasion of this country. Incumbent Hamid Karzai will probably win, even though the three major areas his electorate asked him to address - security, corruption and access to government services - have stalled or worsened throughout much of the country in the five years since his election. On the streets of Kabul and Kandahar, there is little of the excitement that marked the inaugural round of presidential elections.

But this is an election of huge importance for Western nations, including Canada, that have committed money and lives in the military effort here. Unlike previous efforts, this election will be run by Afghans. Locals will man the polls, count the votes and provide security against an enemy fully motivated to discredit and disrupt the voting process.

If the Afghans succeed in pulling off even a passable electoral process, Ottawa and its allies will have at least some proof that the end state so often proposed for this country - a self-sufficient and peaceful democracy - is an achievable goal. If the election is a failure, either as a result of violence or fraud, it will act as grim reminder of just how frail Afghanistan's security and governance infrastructure still is.

Only problem is, they were about 12 years old.

If Afghanistan's voter registration process - the bulk of which took place between October, 2008, and January of this year - is any indication, election day may well be riddled with inconsistencies and errors. A report produced in May by the Free and Fair Election Foundation of Afghanistan - the country's election observation agency that Mr. Kippen helped found - listed all manner of problems with the process by which 4.5 million new voters registered for the upcoming election. They included everything from underage voters and multiple registrations by the same person to the hiring of relatives and political operatives for jobs that require impartiality. In one case, the agency says it discovered about 500 voting cards issued to a single person.

The problems illustrate how Afghanistan's various maladies sometimes collide. In some regions of the country, for example, the security situation is too volatile to send female staff to work at the registration centres, says the agency's director Jandad Spinghar. Because of cultural considerations, male staff members cannot register women. As such, staff in some centres began handing out registration cards to male heads of families based on lists of female relatives brought in by the men. The result is a smattering of areas where, on paper, there are more women registered to vote than men. In reality, that's highly unlikely. "Women" may well determine the outcome of the election, they just may not exist.

"If the violations continue, no one will believe the results - everyone will blame the process," Mr. Spinghar says.

"We will have the same problem that happened in Iran. But Iran is a powerful country. We don't have the same stability. We will not be able to control what happens."

The Electoral Complaints Commission was formed several months after the voter registration drive, Mr. Kippen notes. Nonetheless, commission staff members meet regularly with colleagues from the Free and Fair Election Foundation and the Independent Election Commission, in the hopes of separating allegations that can be substantiated from the flood of rumours and smear campaigns.

Mr. Kippen says many Afghans still don't understand what his commission - a body that has the power to expel candidates and order repolling - actually does.

"People will throw property disputes our way, marital issues our way," he says. "There's a lot of public education that's required about what we do."

But there won't be time for that: The ECC is a temporary agency that will be disbanded 30 days after the election results are ratified. But more so than in past years, the commission's staff of 270 is almost all-Afghan.

In past elections, Western governmental and non-governmental organizations shouldered the responsibility of ensuring fair elections.

This time, the international community will attempt to showcase Afghanistan's self-sufficiency, despite the risk that a massive election comprising 7,000 polling centres and 20,000 polling stations may be too much for a relatively inexperienced local staff to handle.

That risk doesn't just cover the civilian side of running the elections: Security will be the responsibility of Afghans as well.

"The Afghan security forces are in the lead for planning the execution of security, this is their game," says Brigadier-General Damian Cantwell, chief of the elections task force for the International Security Assistance Force in Afghanistan. "There's no intent whatsoever to see ISAF forces in close proximity to polling stations."

Instead, immediate security at the stations will be provided by Afghanistan's national police force, Brig.-Gen. Cantwell says, with the Afghan National Army possibly stationing men further out.

Both forces - especially Afghanistan's police - were previously criticized for their relative inability and lack of training. However Brig.-Gen. Cantwell says he's impressed with the degree to which Afghanistan's security forces have committed themselves to the task of providing election security. The forces recently completed planning exercises and a "national security rehearsal" in Kabul, all designed to address everything that could go wrong come election day. What remains to be seen, however, is just how much violence insurgent forces plan to unleash.

"There are going to be challenges, there's no doubt about it," says Ron Hoffmann, Canada's outgoing ambassador to Afghanistan.

"There are many parts of the country where it's going to be difficult, and we do not know what the abilities and the intentions of the insurgents are going to be.

"A second election - a validated selection of a government by democratic means by a country's people - is everything the insurgents are fighting against."

Mr. Kippen is intimately familiar with the violence of insurgency - he came within 90 minutes of losing his life to it.

He was staying at the Islamabad Marriott Hotel in Pakistan last year and decided at the last minute to take up a friend's dinner invitation. About 90 minutes later, he heard an explosion shake the city. Militants had detonated a massive bomb at the Marriott, gutting the building and killing dozens.

When Mr. Kippen returned to what was left of the hotel, he couldn't get near his room - all the walls and ceilings had collapsed.

"I don't think about it often," he says. "But I sometimes think, 'What if I'd still been there?'"

In the four years since Afghanistan's last election, this entire region has become a much more violent place, and that spectre of violence hangs over the upcoming elections.

Allegations of attacks against campaign workers are already rolling in, and Mr. Kippen's commission has developed a procedure whereby province-level staff can pass a complaint up to headquarters in Kabul if they don't feel safe handling it themselves.

Still, Mr. Kippen believes this year's election can improve on the last one, and that in the long run, these improvements will amount to something more than just a slightly smoother voting process.

"I'm optimistic over the longer term," he says. "It's going to take a long time to build up the institutions here.

"I'm sure there will be hiccups this election. Let's hope they won't be big hiccups." 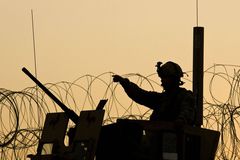 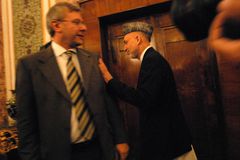 Follow Omar El Akkad on Twitter @omarelakkad
Report an error
Due to technical reasons, we have temporarily removed commenting from our articles. We hope to have this fixed soon. Thank you for your patience. If you are looking to give feedback on our new site, please send it along to feedback@globeandmail.com. If you want to write a letter to the editor, please forward to letters@globeandmail.com.
Comments