He was one of the Canada's most-wanted fugitives for nearly three years, the subject of a segment on the TV show America's Most Wanted and an exhaustive manhunt in the Greater Toronto Area. But now that Canadian authorities know the exact whereabouts of Gu Wei Wu, a Chinese immigrant wanted for a fatal kidnapping in Mississauga, they can't have him.

In a case that exposes an incompatibility between justice systems in China and Canada, prosecutors in Guandong Province have charged Mr. Wu with intentional homicide in relation to the Mississauga crimes rather than send him back to Canada.

"Logistically, it sounds like a nightmare," said Daniel Brown, a criminal lawyer who represented one of Mr. Wu's accomplices. "How will they get witnesses there? If the Chinese are really interested in helping Canadian authorities, why not send him back?"

The scenario is rare but not unprecedented. The lack of an extradition treaty between Canada and China led to a series of jurisdictional disputes after the 2002 murder of Amanda Zhao. The Chinese international student was murdered in Vancouver by her boyfriend, Li Ang, who fled to China.

Despite repeated Canadian requests for Mr. Ang's extradition, Chinese officials refused. The RCMP eventually agreed to pass along evidence in the Zhao case to China, but only after receiving assurances he wouldn't face the death penalty. A decade after the murder, Mr. Ang received a sentence of life in prison.

Ottawa isn't saying whether it will follow a similar template this time around. The Department of Justice is refusing to answer all questions related to the Wu case, citing the confidential nature of communications with foreign governments.

The lead investigator on the Wu file for Peel Regional Police, Inspector George Koekkoek, said Canada will look for some of the same guarantees this time around, but that the details are up to Ottawa as it co-ordinates information exchanges with China under the auspices of the Mutual Legal Assistance Treaty.

"Given our human rights laws we would take a strong position that the death penalty is off the table," he said.

Peel police have long maintained that Mr. Wu was the mastermind of a botched kidnapping scheme that led to the death of a luxury real estate agent in 2011.

Mr. Wu spent one year plotting an elaborate kidnapping of a Chinese businessman named Johnny Fei, learning his habits and family details, according to an agreed statement of facts submitted to the courts when several of Mr. Wu's accomplices were convicted in 2012.

On Jan. 19, 2011, Mr. Wu arrived at Mr. Fei's $2.38-million Mississauga mansion posing as a buyer and abducted the businessman along with his real-estate agent, Tony Han. The two men were beaten and taken to a Markham home, where they were chained up in the unfinished basement.

They remained there for seven days as Mr. Wu insisted on a $2.5-million ransom from the families of the two men. The kidnappers thought they were making headway when one of the families wired $330,000 to a Chinese account.

On Jan. 26, Mr. Han had a heart attack as one of his captors was guiding him to the washroom. His captors tried CPR to no avail.

"That was when things began to unravel," said Insp. Koekkoek. "They started to panic."

The kidnappers disposed of Mr. Han's body in a hole in the basement floor and freed Mr. Fei in a Toronto parking lot. Police discovered the body five months later.

Investigators spent months conducting interviews and surveillance in their search for Mr. Wu, before determining he'd fled to China using one of numerous aliases.

Insp. Koekkoek was relieved to hear of Mr. Wu's arrest in China, but expects complications ahead. "This won't be done any time soon," he said, "but at least we don't have to look for him any more." 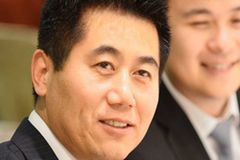 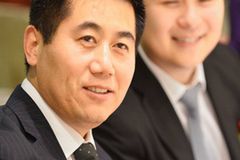 Murder charge laid in abduction of real-estate agent
July 14, 2011
Follow Patrick White on Twitter @Nut_Graf
Report an error Editorial code of conduct
Due to technical reasons, we have temporarily removed commenting from our articles. We hope to have this fixed soon. Thank you for your patience. If you are looking to give feedback on our new site, please send it along to feedback@globeandmail.com. If you want to write a letter to the editor, please forward to letters@globeandmail.com.
Comments are closed