Pakistan hanged two convicted militants Friday in the country's first executions in years, while warplanes and ground forces pounded insurgent hideouts in a northwest region bordering Afghanistan – part of a stepped-up response to the Taliban slaughter of scores of schoolchildren.

Not chastened by criticism from all corners of the globe, the Taliban threatened earlier Friday to kill more children if executions were carried out as promised.

"We can create a mourning situation at the homes of many army generals and politicians," spokesman Mohammad Khurassani said in a statement e-mailed to reporters.

A key question now is whether attacking children will undermine the sympathy many Pakistanis have for the militants. Analysts say the Islamabad government needs strong public support to continue the fight against insurgents in the northwest.

Many Pakistanis believe the militants are holy warriors taking up arms against Pakistan only because the government aligned itself with the unpopular U.S.-led war in Afghanistan. A network of seminaries and religious schools promote religious hate, and some of their leading clerics command widespread respect in the country.

Maulana Abdul Aziz, a radical cleric in Islamabad, warned in his Friday sermon at the famous Lal Masjid mosque about a backlash in the event of executions.

Aziz expressed his sorrow over the schoolchildren's deaths, but also called for ending the operation against the Taliban in the tribal regions of North Waziristan and Khyber. He called the Taliban "our brothers" and warned that if the military continues its bombardment, "there will be a reaction."

But there were signs, albeit small, that this type of speech will find a tougher audience in Pakistan after Tuesday's attack, when militants strapped with explosives broke into a military-run school in Peshawar and killed 148 people – almost all of them children.

A few hundred people protested Friday night outside the Lal Masjid mosque, calling for an end to support for the militants.

In schools across Pakistan, special classes were held Friday, with schoolchildren chanting prayers in memory of the victims of the Taliban slaughter. In mosques throughout the country, worshippers also offered special prayers for the massacred innocents in Peshawar.

Another challenge for Pakistan will be creating a criminal justice system that can properly handle the militant networks. There are few convictions in militancy cases, partly because of a lack of protection for witnesses and judges.

A Pakistani prosecutor said the government will try to cancel the bail granted by a judge Thursday to the main suspect in the 2008 attack that killed 166 people in the Indian city of Mumbai. An outraged India noted in a statement that "given the scale of the tragedy that Pakistan itself has faced in recent days, it is incumbent on it to realize that no compromise can ever be made with terrorists."

Prime Minister Nawaz Sharif appears determined to show he understands that. On Wednesday, he announced that he would lift a moratorium on executions in terrorism-related cases. The military then promptly signed the death warrants of six "hard-core terrorists" who had been earlier sentenced by military courts.

The Home Minister for Punjab province confirmed the executions of the first two, Mohammed Aqeel and Arshad Mahmood, at a prison in the city of Faisalabad.

"We have started these executions by hanging two terrorists," Shuja Khanzada told the Associated Press. "Today's executions of terrorists will boost the morale of the nation, and we are planning to hang more terrorists next week."

Both Mr. Aqeel and Mr. Mahmood were tried in military courts so little is known publicly about the cases. Pakistani media reported that Mr. Aqeel was convicted in relation to a 2009 attack on army headquarters, and Mr. Mahmood for his role in a plot to kill former president Pervez Musharraf.

Capital punishment had been suspended since 2008, though there was one execution in 2012 by the military. The reinstated death penalty affects both civilian and military cases.

It's not just radical clerics who oppose the executions. Human rights organizations have raised concerns about using the death penalty in a country where police investigations are poor and confessions are said to be often induced by torture. There are an estimated 8,000 people on death row.

"It is extremely disappointing that the government has given in to fear and anger by executing two people today. As horrific as the attack on the Peshawar school was, more killings – this time by the government – is never the answer to combatting terrorism and crime," said David Griffiths, Amnesty International's deputy Asia Pacific director.

The other part of the government's tough response in the wake of the school massacre has been its widening the military offensive against the militants in the country's northwest.

The military said 119 insurgents were killed in three different offensives in the Khyber region Thursday and Friday – 62 in ground action and 57 in air strikes. There was no immediate claim of civilian casualties.

Khyber borders Peshawar, where the school massacre occurred, and militants have traditionally attacked the city before withdrawing to the tribal region where police cannot chase them.

Even if the government wins popular backing for an all-out military assault against the Pakistani wing of the Taliban, that doesn't mean it will also attack militant groups that use the country as a safe haven from which to carry out attacks abroad.

Pakistan has long been accused of playing a double game when it comes to dealing with militancy – fostering some militant groups that operate in Afghanistan and India as a way of maintaining influence there, while pursuing other militants who target the Pakistani state.

In June, when the military launched its operation in North Waziristan, it vowed it would go after all militants. Doubts remain, though, about how aggressively the army has pursued groups such as the Afghan Taliban or the Haqqani network, which the United States says is responsible for numerous attacks in Afghanistan. 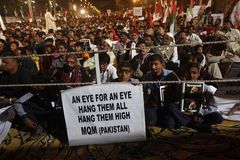 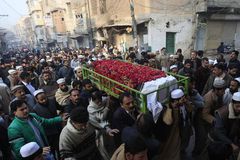