The white marble of the ancient Sufi shrine in Lahore, where suicide bombers killed 43 people last week, seems unblemished by the attack. The blackened rubble has been swept away. The saint who died here almost a thousand years ago continues his slumber beneath the carved arches and echoing halls.

But the moderate Muslims who consider this the holiest shrine in Pakistan say they have finally woken up. Leaders of the Barelvi, the country's largest sect, gathered from across the subcontinent Thursday to declare war against the Taliban and those who support them.

"This is the beginning of a new movement," said Haji Hanif Tayyab, a retired government minister, prompting a full-throated roar from thousands of people waving flags and shouting slogans.

The rally at the Data Durbar shrine may answer a question sometimes posed by terrorism analysts: Where are the moderates? Extreme versions of Islam get most of the media attention in Pakistan, but the sects usually associated with militancy - Wahabbism, Salafism, Deobandism - are not as popular as the Barelvi movement, a branch of Sunni Islam that embraces the eclectic traditions of Sufism: saints, shrines, music and dance.

The Barelvis claim to represent about 85 million people in a country of 175 million, but despite their numbers have been largely silent as Pakistan suffered years of rising extremist violence.

"They were quiet, but then recently they became more active because they feel themselves under threat," said Hasan Askari Rizvi, a political analyst in Lahore.

Perhaps because of their reputation for tolerance and peace, Barelvi leaders did not attract much notice two months ago when they announced the creation of the Sunni Itehad Council, an alliance of 22 Islamic groups that oppose the Taliban.

The militants appear to have retaliated with an attack on the Barelvi's largest shrine. The death toll was smaller than another attack in Lahore a month earlier, in which 93 people died at two mosques belonging to the minority Ahmadi group, but the reverberations have been felt far more deeply. By attacking the Ahmadis, the extremists were picking on a small group already marginalized in society; by making enemies of the vast Barelvi community, some analysts wonder if the militants overreached.

"Today's convention might be the start of a real protest," said Asim Hussain, a reporter for The News International who has specialized in covering Lahore's religious groups for the last 10 years.

Pakistan's Taliban have denied any role in the attacks. Police recovered the heads of two suicide bombers, but have not revealed any conclusions about who sent them. Pakistan's notoriously conspiracy-minded media have been rife with speculation about the role of their favourite villains, India and Israel.

At the shrine, Barelvi leaders pointed to more obvious suspects. In speech after speech, bearded religious figures screamed into a microphone and pounded the podium, denouncing Deobandi groups such as the Jamiat Ulema-e-Islam, which has expressed sympathy for the Taliban. Closer to home, they also criticized Lashkar-e-Taiba and Jamaat-ud-Dawah, groups accused of links with Punjabi militants.

They also highlighted what they describe as lax or complicit figures in the government and security forces. Many called for the resignation of Rana Sanaullah, the Provincial Law Minister, whom they accuse of using a banned militant group to draw support for a campaign rally.

"Our intelligence agencies know full well who is a terrorist, and where they get their support," said Sahibzada Fazal Karim, chairman of the Sunni Itehad Council and a member of Parliament.

Other speakers blamed Saudi Arabia for funding sects that have produced terrorists.

The most raucous participants were followers of Sunni Tehreek, an Islamic party that has joined the new alliance but holds more extreme views. While other speakers talked about taking political action against the Taliban, suggesting they should work to get more Barelvi leaders elected to government and lobby for tougher law enforcement, the leaders of Sunni Tehreek implied that confronting the Taliban may require violence.

"We must be ready to sacrifice our lives," said Muhammad Sarwat Ejaz Qadri, quivering with emotion. Dozens of young men shouted in agreement.

Others warned about the terrible results that might follow if Pakistan's major religious sects take up arms against each other. Syed Mahfooz Mashhadi, provincial head of Jamiat Ulema-e-Pakistan, a religious party, spelled out the worst scenario: "If we react that way, there will be civil war," he said. 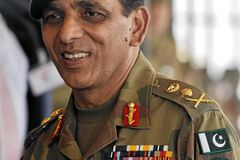