A "mission of peace" to the Middle East by Joseph "Sepp" Blatter, head of international soccer's governing body, has ended in apparent failure, as Palestinian leaders rejected an Israeli offer to ease travel restrictions on football players in the occupied territories.

Palestinian president Mahmoud Abbas and Palestine Football Association (PFA) president Jibril Rajoub told Mr. Blatter they considered the Israeli offer inadequate and vowed to press ahead with their campaign to have Israel suspended from FIFA at the group's upcoming world congress in Zurich. A PFA motion to suspend is scheduled to be debated and voted upon on May 29.

"We will keep the proposal on the agenda for sincere and open discussions by the FIFA member associations," Mr. Rajoub said Wednesday at a joint press conference with Mr. Blatter in Ramallah. "There will be no compromising on free movement of our athletes and officials," he said.

The PFA has complained for more than two years that Israeli occupation forces make it extremely difficult for its personnel to travel in, out of and between the Palestinian territories.

In his discussions with Mr. Abbas, the FIFA president said that Israel had offered to station people at checkpoints "to facilitate the movement of football people" and to establish a special service to allow players to move between the West Bank and Gaza Strip.

The Israelis also agreed to create a special ID card for Palestinian players, he said, and to have a monitoring committee – comprised of an Israeli, a Palestinian and a FIFA official – that would meet monthly to address issues that arise.

The Palestinians said they had heard such promises before but that nothing had been done. Yes, said Mr. Blatter, but this time Israeli officials had "said they will do it." That was not sufficient to convince the Palestinians.

The FIFA chief did acknowledge that another of the Palestinian concerns had not been addressed in the Israeli proposal – the presence of Israeli soccer teams in five Israeli settlements within the occupied Palestinian West Bank.

"We discussed this matter," said Mr. Blatter, referring to his talk with Mr. Abbas, "and this is a big question mark."

Mr. Blatter has tried hard to defer or cancel the Palestinian motion (as has been done at the two previous annual congresses), saying a vote to suspend Israel in these circumstances could damage the FIFA organization and set a "dangerous precedent."

Mr. Rajoub, however, said that all other avenues for resolving the matters had come to a dead end and it was up to FIFA members to decide.

"We are convinced that most FIFA members share our views on the situation and will support our proposal … because racism is one of the greatest dangers that football faces at the present time," he said.

Mr. Blatter had proposed the novel idea of FIFA staging a "match for peace" between Israel and Palestine in Zurich. Israeli Prime Minister Benjamin Netanyahu had embraced the idea at his meeting with the FIFA head Tuesday, but the Palestinians said the time was not ripe for such a get-together.

"It's a creative idea, I like it," Mr. Rajoub told Mr. Blatter. "But we have to pave the road for that, we have to prepare the environment.

FIFA has suspended two nations in the past: South Africa in the 1960s because of its apartheid practices, and Yugoslavia in the 1990s during the Balkan crisis. 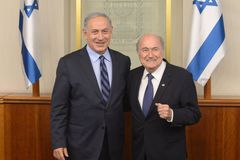 The unlikely site of Palestine’s battle for recognition: the soccer field
May 15, 2015 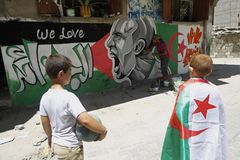