Moments before the Palestinian flag was raised for the first time at the United Nations Wednesday, Palestinian president Mahmoud Abbas threw down the gauntlet at the feet of the Israeli government of Benjamin Netanyahu.

Mr. Abbas declared before the world's nations gathered at the UN General Assembly that if Israel continues to violate the Oslo agreements, the historic 1993 accord that is the basis for a two-state solution to the Israeli-Palestinian conflict, the Palestinians "cannot continue to be bound by these agreements." In that event, he added, "Israel must assume all of its responsibilities as an occupying power" over the West Bank and Gaza Strip.

"We will not remain the only ones committed to the implementation of these agreements," said Mr. Abbas, head of the Palestinian Authority, an administrative body created by the Oslo accords to govern the Palestinian territories as they moved toward full statehood.

Israel's refusal to abide by the agreements "renders us an authority without real powers," Mr. Abbas said.

Should that authority be wound down, the results could be catastrophic – several thousand armed and well-trained Palestinian security forces would be without a job and without command; conflict with Israeli settlers can't be ruled out, which would be met with a significant deployment of Israeli soldiers.

The pivotal Oslo agreement was signed on the White House lawn of U.S. president Bill Clinton by then Israeli prime minister Yitzhak Rabin and Yasser Arafat, the leader of the Palestine Liberation Organization. It promised a Palestinian state would be established by mutual agreement within five years.

Mr. Rabin's assassination just two years later made the task seem unreachable. He was killed by an extremist Israeli who rejected the idea of any part of "greater Israel" being handed over to non-Jews.

Since then, negotiations between the parties repeatedly failed, the region was beset by a violent intifada that claimed the lives of about 1,000 Israelis and 3,000 Palestinians, and the number of Israeli settlers in the West Bank and eastern Jerusalem almost tripled to about 650,000.

For all the drama of Mr. Abbas's declaration, many observers don't think much will happen, at least not immediately.

"I think he's just trying to restore some lost lustre," said Michael Bell, former Canadian ambassador to Israel and the Palestinian territories. "He's come under a lot of criticism for failing to achieve very much," he said, "especially of late." In July, for example, the home of a Palestinian family was firebombed, apparently by Israeli settlers. A mother, father and toddler perished and a four-year-old clings to life.

However, the Canadian-born Ms. Buttu, now a consultant in Ramallah, doesn't think Israel and the United States will let Mr. Abbas bring down the Palestinian Authority.

"It is in the interests of both Israel and the international community for the PA to remain intact, and many Palestinians rely on it financially."

However, should he succeed in collapsing the organization, said Mr. Bell, "all bets are off."

Such a development would leave a hefty, well-armed force at loose ends, he noted. "We could see settlers provoking a response and revenge attacks being carried out."

Once that begins, he said, you're apt to see "fighting between a number of groups – Palestinian soldiers, Israeli soldiers, settlers, Hamas and other radicals."

"It would be like Iraq after the Americans dissolved the ruling Baath Party," he warned.

"We expect and call on the [Palestinian] Authority and its leader to act responsibly and accede to the proposal of … Israel and enter into direct negotiations with Israel without preconditions."

Mr. Netanyahu is scheduled to address the UN assembly Thursday.

Editor's note: The previous headline did not attribute a statement about Israel and the Accord to President Abbas. 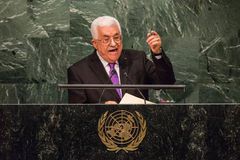 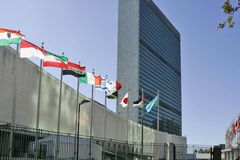 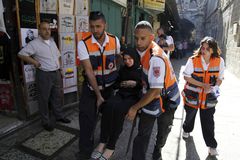 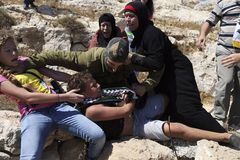