South Africa's political crisis is entering its second week, with its government paralyzed by a protracted struggle to remove President Jacob Zuma from office.

The ruling African National Congress is preparing to make a fresh attempt to dump Mr. Zuma at a national executive meeting on Monday afternoon. The executive is likely to vote for his removal, but it has no formal legal power to force him out. It will need some form of co-operation from Mr. Zuma, who still holds significant factional support and many levers of power.

Most analysts expect that the deadlock will be resolved soon, with Mr. Zuma bowing to the new reality and allowing ANC leader Cyril Ramaphosa to replace him. If he refuses, he faces the threat of impeachment in Parliament. But as the crisis drags on, South Africans are complaining that the ANC's internal disputes are forcing the postponement of Parliamentary sessions and distracting cabinet ministers from urgent issues.

The battle over Mr. Zuma is just the latest example of how the former liberation movements of southern Africa are dealing with the dilemmas of lengthy rule and political fatigue.

Decades after they helped defeat colonial or white-minority regimes, the parties of liberation are still clinging to power, slipping increasingly into corruption or authoritarianism. And in countries such as South Africa, Zimbabwe and Angola, the ruling parties are searching for new ways to modernize their image and bring back disillusioned supporters.

In each of those three countries, the governing party has opted for a strategy of dumping their long-dominant leaders and launching new campaigns to fight corruption and revitalize their economies. But as the South Africa example shows, it can be a messy process.

The parallels between South Africa's ANC and the Zimbabwean ruling party, ZANU-PF, are remarkable. Both have been in power for decades: 24 years for the ANC, and 38 years for its Zimbabwean counterpart. Both ascended to power after negotiating an end to white-minority regimes. And both have inflicted heavy damage to their economies in recent years under presidents who seemed isolated and hostile to foreign investment.

The difference, of course, is that Zimbabwe needed a military coup to force 93-year-old Robert Mugabe to the negotiating table last year, whereas the ANC held a convention to elect Mr. Ramaphosa at the end of Mr. Zuma's term as party leader in December.

But since then, the parallels have again been striking. Both of the ruling parties have used the threat of parliamentary impeachment to put pressure on long-entrenched presidents. Both have tried to reinvent themselves with new frontmen as national elections draw closer. Both have sought to create a new brand at the top of their parties, while retaining the same traditional structure below. And both have used populist tactics, including anti-corruption messages and pledges of economic reform, to lure back the voters who have become disillusioned in recent years.

The tactic seems to be working in Zimbabwe, where the new president, Emmerson Mnangagwa, has boosted the chances of victory for ZANU-PF in the election that is expected by July. He is cracking down on corruption and attracting fresh interest from Western investors and governments. But his cabinet appointments have been dominated by veterans of the Mugabe era, suggesting that the same underlying elite is still in power.

A similar process is underway in Angola, where the ruling party recently chose Joao Lourenco to replace José Eduardo dos Santos, who had ruled the country for 38 years. In less than five months in office, Mr. Lourenco has sacked high-level officials – including the daughter and son of the former president – to show the seriousness of his promises to fight corruption and stimulate the economy. His popular moves are likely to help the former liberation movement maintain its long grip on power.

This is the same broad strategy that Mr. Ramaphosa is expected to follow in South Africa. But first he must persuade Mr. Zuma to step down, while avoiding a damaging split in the ANC.

There are still many South Africans who support Mr. Zuma, especially in his stronghold in KwaZulu-Natal province, and they could break away to form a new party if they are angered by the ANC's handling of Mr. Zuma. There have already been two splits in the party in the past decade after charismatic leaders were forced out, with new opposition parties emerging both times.

In a speech in Cape Town on Sunday, Mr. Ramaphosa called for unity in the ruling party. But he also promised that the transition from Mr. Zuma would be completed soon. "We know you want closure," he told the crowd. 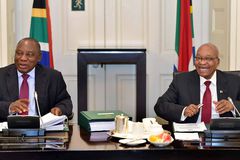 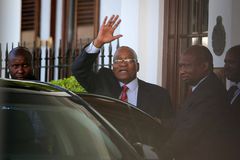 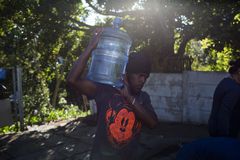