Ten more people were reported killed on Sunday in attacks by armed mobs and militia groups in the capital of the Central African Republic as peacekeepers struggled to control the escalating violence.

Among the latest attacks on Sunday were three more of the public lynchings that have shocked the world, according to reports by a Human Rights Watch researcher in the capital, Bangui.

Thousands of Muslims, a minority in the country, have fled to neighboring countries as revenge killings are increasingly perpetrated by Christian and Muslim militia groups and civilian mobs. Nearly a quarter of the country's 4.6 million people have been displaced from their homes by the fighting.

In the latest clashes on Sunday, six people were killed by a Muslim militia and two Muslims were lynched by a mob in revenge, according to Peter Bouckaert, the Human Rights Watch researcher. Muslim homes and businesses were set on fire, and another person was killed when Rwandan peacekeepers opened fire to disperse the mob, while a Christian boy was also lynched in a separate incident, he said.

At one point, the peacekeepers came under siege from a crowd that threatened to attack them, Mr. Bouckaert said in a series of tweets from the scene.

A convoy of about 500 cars, trucks and motorcycles left Bangui on Friday, carrying thousands of Muslims, as the refugee exodus continued. Jeering and stone-throwing crowds watched the convoy leave, and one man who fell from an overloaded vehicle was killed by a mob, reports said.

In the most notorious of the recent murders, soldiers killed and mutilated a suspected rebel on Wednesday in front of hundreds of peacekeepers and other onlookers at a military ceremony that had been attended by the new interim president Catherine Samba-Panza.

The prosecutor of the International Criminal Court announced on Friday that the court is launching a preliminary investigation into possible war crimes in the Central African Republic. "The plight of civilians in CAR since September 2012 has gone from bad to worse," said prosecutor Fatou Bensouda.

She cited reports of hundreds of murders, rapes and other crimes, including sexual slavery and the use of children in hostilities. "In many incident, victims appear to have been deliberately targeted on religious grounds," she said.

The fighting has intensified since a Muslim-led rebel group toppled the government last March. The rebels went on a looting and killing spree in Bangui, and a Christian militia retaliated with brutal attacks of its own. The Muslim rebel leader was forced to step down from the presidency, but the new president has been unable to end the bloodshed.

More than 6,000 African and French soldiers are in the country as peacekeepers, but the killing has continued.

In Ottawa, the House of Commons is planning a debate on Wednesday to discuss the crisis in the Central African Republic. "Canada strongly condemns the upsurge of violence," said a statement by Foreign Affairs Minister John Baird. He said the attacks were "reprehensible" and the perpetrators must be brought to justice.

Medecins Sans Frontieres (Doctors Without Borders) said the "extreme violence" has reached unprecedented levels in recent weeks. "The whole civilian population is trapped within extreme polarized violence, and each day, civilians are paying the price of abuses committed by the two main armed groups," MSF said in a statement.

"In many towns, Muslim groups are currently isolated and threatened," the statement said. "Tens of thousands have already left the country into exile in Chad or Cameroon…. Civilians remain in constant fear for their lives, and have been largely left to fend for themselves."

In January, MSF treated more than 1,650 people who were wounded in the violence, and one clinic admitted 91 patients with machete or bullet wounds in the past week alone.

In the town of Bouar, more than 8,000 people were "effectively imprisoned, unable to flee the violence to which they have been subjected," MSF said. "Armed groups are preventing their departure, and access to healthcare is almost impossible."

Hundreds of thousands of displaced people are "living in appalling conditions, too scared to return to their homes," MSF said. "The effect of the violence on the entire civilian population has reached shocking levels," it said. "The indiscriminate and seemingly unstoppable violence has continued to reach new heights over the last months." 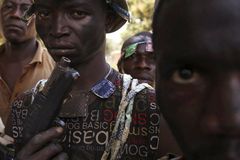