It will go down as one of the most daring landings in the annals of spaceflight, and probably one of the strangest.

As of early Thursday morning, there is still much that mission team members don't know about how their small robot probe named Philae landed on the surface of a distant comet, despite significant unknowns about the dark and dusty terrain it was landing on, and some apparently serious technical problems along the way.

(The European Space Agency has released the first picture taken by its Philae probe on the surface of a comet.)

What they do know is that Philae managed to touch down, at least once, twice or maybe even three times – if it rebounded and settled back down.

Either way, it's one for the history books.

For those involved with the mission, including some for more than a decade, the first signs that Philae had survived its rendezvous with comet Churyumov-Gerasimenko brought jubilation and emotional release.

"When I left the control room everybody was moved, excited, most people were crying – they are have difficulty believing that it happened," said Paolo Ferri, head of the European Space Agency's mission operations.

The signal confirming touchdown arrived on Wednesday at the European Space Operations Centre at 5:03 p.m. local time (11:03 a.m. Eastern Time). Its arrival shattered the tension that had built up over seven hours, starting when Philae (fee-lay) detached from its mother ship, the Rosetta spacecraft, and began its descent.

"Philae has done its job. We are on the comet!" said the lander's project manager Stephan Ulamec soon after the telltale radio bleep was received.

A downward-pointing camera on the lander captured a series of images of the comet as it approached.

The first, taken from a distance of three kilometres, shows that the lander was right on target as it left Rosetta.

What is less certain is what happened at the surface.

At that point the lander's signal became intermittent.

Clearly the lander was alive but possibly not yet settled on the surface.

For a time, cheers gave way to furrowed brows as flight controllers struggled to interpret the broken telemetry.

The gaps in the signal meant that Philae was unable to deliver all the data scientists had hoped to acquire in the first hour or two after the landing, including a panoramic view from the surface.

But this did little to dampen a night of celebration and speculation as officials took a deep breath and scientists tried to imagine where the $300-million lander had ended up.

It's expected that much more will be revealed on Thursday as data is analyzed and, with luck, more information arrives from Philae.

What is known is that pencil-length metal rods protruding from the lander's feet were only pushed back a few centimetres as Philae touched down, indicating a surface with the consistency of soft, dry sand.

The lander also appears to have failed to fire two harpoons into the body of the comet, a move designed to help anchor it to the low-gravity object.

This may be the biggest worry in the coming days because it implies the lander is not secure on the comet's volatile surface.

Nevertheless, the landing and the data acquired thus far is already more than many dared to hope for.

If the lander managed to survive past its initial 60-hour science run and continues to operate for several more weeks, it stands to revolutionize comet science and pave the way for a future mission that might return a sample of a comet back to Earth.

In that sense, Philae is "a pioneering mission," said Jim Green, director of NASA's planetary science division who was on hand for the landing.

"This was the next step," Dr. Green added.

Facts about the comet landing

How did it get there?

The European Space Agency launched its Rosetta spacecraft in March, 2004, with the Philae lander bolted to its side. After a decade-long journey, Rosetta arrived at comet Churyumov-Gerasimenko on Aug. 6 this year and became the first spacecraft to orbit a comet, which it continues to do.

As soon as Rosetta arrived, it began scouting for landing sites. By October, mission planners had made their choice: The landing would take place on the smaller of the comet's two distinctive lobes, on an open, well-lit area with comparatively fewer hazards than other places on the comet.

Comets are a mix of ice and rocky material that date back to the formation of the solar system. As such, they are thought to contain information that will help inform our understanding of how the planets originated and, more broadly, about the process of planetary formation that is at work around stars throughout the galaxy.

Comets are also of interest to astrobiologists because some are known to contain carbon-bearing molecules that could have been important for kick-starting life on Earth. But the bottom line is that comets are terra incognita. Exploring them is part of the basic reconnaissance of the solar system that scientists and space agencies have been engaged in since the 1960s.

Scientists would ultimately like to bring a piece of a comet back to their laboratories on Earth, but until such a mission becomes feasible, the next best thing is to put a laboratory on a comet.

Philae carries 10 scientific experiments designed to work together to characterize the comet and glean information about its composition and history. Among other things, these instruments will measure the chemical elements in the surface material, look for signs of organic molecules and use a radio beam between Rosetta and the lander to probe the comet's interior.

If Philae is in reasonable health, it can survive past its initial 60-hour science marathon and pause to recharge its batteries using solar panels. After that, the mission will continue to unfold as more about the landing site becomes known. Among the most important measurements will be those involving the lander and the Rosetta orbiter together, with the lander providing a "ground truth" for the more global perspective already emerging from the orbiter.

Philae has a shelf life limited by the comet's approach to the sun over the coming year. Because it is built to survive the cold, Philae is not as able to deal with heat. If the lander survives that long, it will probably succumb to heat overload in the next few months. 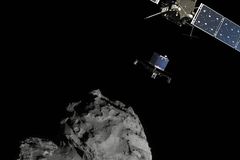 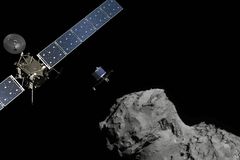 The comet landing, plus five other things predicted by the film Armageddon
November 12, 2014 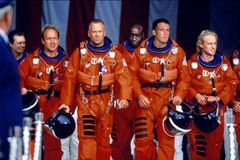